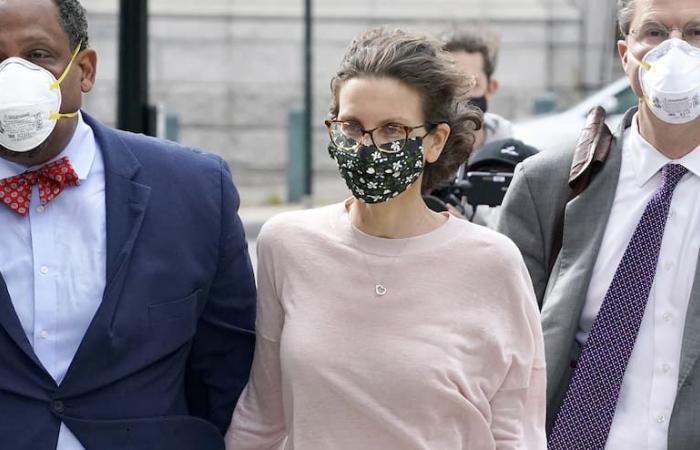 Clare Bronfman will spend the next seven years in a Connecticut prison. But what could have pushed the rich heiress of a famous Montreal family to finance an American sect exploiting sex slaves?

• Read also: Sentence Tuesday of the American master of manipulation

Never the NXIVM group, led by Keith Raniere, where women were sexually exploited, could have continued its activities for so long and so effectively without Clare Bronfman’s $ 100 million, prosecutors said as they laid the charges.

The Bronfman family is one of the richest in the country. Clare Bronfman’s uncle Charles Bronfman alone is said to have a fortune valued at $ 2.3 billion, according to Forbes.

The 41-year-old admitted to using false identities to access computer data. She helped Keith Raniere use a credit card in the name of an ex-mistress, Pamela Cafritz, after she died of cancer.

The heiress also used her fortune to fund legal subpoenas against suspected enemies of NXIVM.

Arrested in July 2018 along with other female recruiters, Clare Bronfman pleaded guilty to charges of identity theft and criminal conspiracy to hide illegal immigrants.

Samuel Bronfman, the grandfather of Clare Bronfman, is well known for founding the Seagram Empire.

Born in 1979, Bronfman is the youngest of seven children of Edgar Bronfman, and granddaughter of Samuel Bronfman, founder of the Canadian Seagram spirits empire based in Montreal. From their father’s third marriage to Georgina Bronfman Havers, Clare Bronfman and her sister Sara lived their childhood in luxury.

Her parents divorced when she was very young. She spent her childhood in boarding schools in England. She was going to visit her mother, who resided in Kenya, while her father lived in the United States.

As a teenager, passionate about horses, the young woman left to join her father on his ranch by dropping out of high school. Hoping for a career, she won a few prizes in equestrian tournaments.

The sect was his family

Then in 2003, at the age of 23, her life took a turning point. His sister Sara introduced him to NXIVM, a center offering personal growth courses. Clare Bronfman immediately fell in love with the founder, Keith Raniere.

Without any equestrian experience, the latter offered to become his trainer in order to lead her to the Olympic Games, which she accepted. Shortly after, however, she gave up the competition to become an administrator for NXIVM.

It was the first time she had felt like part of a family, she later said in court.

Manipulated by the guru

Clare Bronfman after her arraignment in June 2018.

Did she know that women were recruited from the members of NXIVM to be part of a parallel secret society, in reality a harem in the service of Raniere?

As early as 2003, some time after joining the group, a first report exposing the dark and manipulative side of NXIVM appeared in the magazine Forbes. The article included a quote from Edgar Bronfman, Clare’s father: “I think it’s a cult. “

Keith Raniere then began to make Clare Bronfman feel guilty by asking her to redeem herself, witnesses in court said. In addition, he said, his fortune was dirty money amassed during the Prohibition era, and she now had to use it for good, that is, according to him, to finance the activities of his sect.

Was Clare Bronfman bewitched by her guru? As reported by the Albany Times Union in 2015, she allegedly conspired with him to plant spyware on the computer of his own father, Edgar Bronfman, in order to monitor his emails, including his interactions with Hillary Clinton.

The relationship between her and her father remained strained until her death in 2013.

Her lawyers presented the woman as badly about herself and anxious before she met Keith Raniere.

“During my many years at NXIVM, I started to appreciate life, to feel accepted, loved, happy. Many members of this community have become somewhat of my family, and I cannot turn my back on those friendships or deny the profound impact Keith and NXIVM have had on my life, ”she wrote to judge Nicholas Garaufis .

According to her lawyers, Clare Bronfman has always said she is not aware of human trafficking and sexual exploitation activities.

Yet she recruited and paid lawyers for years to silence the victims of the cult.

She and her sister Sara also hired a Montreal spy firm, Canaprobe, for more than $ 1 million to illegally obtain the financial records of elected officials, journalists and several federal judges who presided over litigation involving NXIVM, in order to intimidate them.

She admitted her guilt, as did the other women arrested along with her, either Allison Mack, actress in Smallville, Kathy Russel, the organization’s accountant, and Nancy Salzman, co-founder of NXIVM and her daughter Lauren Salzman.

On September 30, Clare Bronfman was sentenced to 81 months in prison. Nine women victims of the organization came to testify, sometimes in tears, saying the wealthy heiress, who was paying lawyers to silence critics of NXIVM, had ruined their lives. They called her a “dangerous megalomaniac” and a “predator”.

“Madame Bronfman discovered the details of the DOS group [NDLR : le groupe des esclaves sexuelles] and had to make a choice between who she would protect: Raniere or her victims. And she chose Raniere unequivocally. To date, she still has not clearly apologized, ”lamented the judge.

Until the end, Bronfman never disowned his guru. “NXIVM and Keith have changed my life for the better,” she said the day she entered prison.

The NXIVM case is already the subject of screen adaptations. A docuseries, The Vow (The wish, on HBO), emphasizes the non-sexual side of the organization, while Lisa Robinson’s film, Escaping the NXIVM Cult (2019), is based on the testimony of a mother who tried to get her daughter out of the organization.

The Bronfman family marked the history of Canada, and in particular that of Montreal, with their philanthropic actions … and their involvement during Prohibition.

The family has humble origins. Arriving from Russia in 1889, Mindel and Ekiel Bronfman settled in Saskatchewan and then in Manitoba. This Jewish family had seven children, including Samuel Bronfman, Clare’s grandfather.

First peasants, then timber merchants, they turned to the hotel business, realizing that alcohol was an interesting source of income.

Gradually, the Bronfman brothers, headed by Samuel, founded the Distillers Corporation in LaSalle, then, in 1928, acquired the Joseph E. Seagram & Sons distillery. Their company kept the Seagram name.

Samuel Bronfman was also a philanthropist. President of the Canadian Jewish Congress, he persuaded Canada to let in 1,200 victims of Nazi Germany, which he hired in his distillery.

Over the years, Samuel and Saidye Bronfman have established a scholarship foundation to encourage entrepreneurship. Among other things, the couple financed the construction of a pavilion bearing their name at McGill University.

In 1971, their son Edgar Bronfman took over the company. In the 1980s, Seagram became the largest distillation company in the world, with Crown Royal whiskey and Captain Morgan rum, among others.

In 1994, his son Edgar Jr took over, diversifying his business, especially in oil and gas.

Gradually the beverage brands were divested, until in 2000 Vivendi paid Seagram $ 34 billion.

Up for auction, the drink division was bought by Pernod Ricard, which still distributes Seagram gin.

Edgar Jr, like his father and grandfather, was very involved socially. His uncle Charles, who was a majority shareholder in the Montreal Expos for a long time, did the same.

Daughter of Samuel Bronfman, Phyllis Lambert is an architect who has contributed a lot to the Montreal artistic community.

These were the details of the news Rich Bronfman heiress subjected to violent guru for this day. We hope that we have succeeded by giving you the full details and information. To follow all our news, you can subscribe to the alerts system or to one of our different systems to provide you with all that is new.