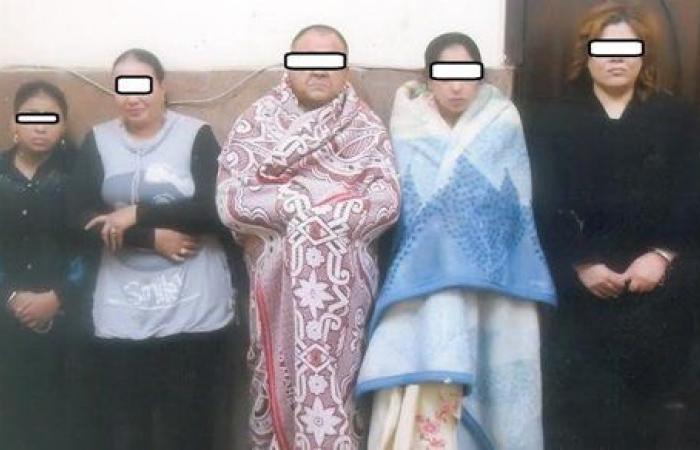 Pornographic clips and sexual images appear from time to time through social networking sites, or pornographic pages on the Internet, and it is clear that these sexual clips begin with illegal relationships and end in police stations with a scandal.
Perhaps the most prominent of these cases were the Al-Anatil cases, including Antel Al-Mahalla, Antel Kafr Hegazy, and finally Antel Al-Tagamoa andAnteel Giza, And that word was associated with scandals due to the accused having an illegal relationship with more than one woman.

The Public Prosecution ordered Auseem, headed by Counselor Mohamed Hani, to detain a butcher known as “Anteel Giza” for 4 days pending investigations into his accusation of practicing vice with women, and photographing them in abusive conditions, as the preliminary investigations revealed that the accused is luring women and photographing them in immoral conditions as well. It turns out that he was in a relationship with one of the women in Al-Barajil, and her husband discovered their relationship, and you got the accused’s mobile phone.

The investigations added that after that, pictures and videos of “Antel Giza”, accompanied by his victims, spread among the people in the area, and that one of them published it on Facebook. Investigations revealed that 4 women were identified among the victims of “Antel Giza”, where there are pictures and videos of 16 One of his victims and that the identified women did not accuse them of adultery, indicating that the accused was married and had children, and had sexual relations with his victims in a rented apartment without knowing his eligibility, and the investigations indicated that the accused was forty years old and worked as a butcher, and he used to photograph the women, during Exercising vice with them, in a rented apartment in Al-Barajil District, in the Oseem Center, north of Giza

Investigations at the Giza Security Directorate concluded that “Antel” Giza, who was arrested, accused of practicing vice with a number of women, and photographing them in abusive conditions, without their knowledge, was taken into custody by a number of affected citizens, and they tried to assault and kill him. With it, however, the detectives managed to save him, and take him under heavy security to the police station, and his mobile phone was seized, and by examining him, he found a number of insulting video clips that he filmed the women.

Mai Abdel-Hadi, the media coordinator for the “You are the most important” campaign, said that the gathering was gone crazy after the girl published his messages, and he threatened her to send her pictures to her father, and our role is to stand by them and keep their identity secret, and Mai Abdel-Hadi added, through a telephone conversation with the journalist Amr Abdel Hamid On the “Public Opinion” program broadcast on the “ten” channel, today, Tuesday, that a person has an intention to present her pictures to her father if she does not stop reporting her to the Attorney General.

After the outbreak of the case in the media and social media in recent hours, “the security services are examining the girl’s distress about being sexually assaulted at the hands of a person described by some users of social media sites as“ the gathering antelope ”. From a person inside a famous gymnasium “Gym” in the Fifth Settlement, and the girl claimed that the complainant was in a relationship with a girl and her mother at the same time, demanding that he be caught quickly and take legal action against him.

In 2014, sexual videos of women spread during the practice of vice with a person, which later turned out to be called a karate coach in the city of Mahalla, Gharbia Governorate, and the clips spread like wildfire, and began circulating on phones, and the number of videos reached nearly 12 videos that were published On pornographic sites, what caused a state of panic among the people after the appearance of women in sexual scenes inside the gymnasium, and it became a major scandal, after which one of the husbands submitted a complaint against his wife and the accused, after he saw a clip in which his wife appeared, and the accused was arrested, and she ruled The court charged him with two years imprisonment with work and enforcement on the charge of publishing sexual and pornographic videos on Internet sites after filming him if he practiced vice with a number of women.

Also in 2014, sexual videos spread in the Beheira governorate for a person during the practice of vice with some women, and he was called Antel Al-Buhaira, and the security services were able to arrest the accused while he was hiding in an apartment in the Asafra area in Alexandria, and the investigations revealed that the accused had practiced immorality with a number of defects inside the center The youth of the village paid 100 pounds, and he used to secretly photograph them with a camera installed while practicing vice and forcing them to practice vice.

It was found that the defendant filmed one of the women more than 20 sexual clips, and that he practiced vice with 5 women and filmed them, and it was also found that the videos were spread by mistake after they were stolen in a computer maintenance store while his phone was being repaired, and the court punished him with 3 years imprisonment and a 2,000 EGP bail.

The security services in Beheira also succeeded earlier in arresting a teacher in Damanhour city who practiced vice with female students and filmed them in disgraceful situations. It was found that the accused owns a center for private lessons for the preparatory and secondary stages in the city of Damanhur, and he exploits the reluctance of some students to the center and his practice of vice with them and filming them Some of them while dancing.

It turned out that the teacher installed cameras inside his center, and arrested him and found 3 cameras installed in different places inside the center and found sexual clips on his phone amounting to 120 sex clips of 3 girls in addition to pictures

Antel Damietta and the female employees

The security services in Damietta also arrested a person who photographed 15 women in immoral conditions and threatened to publish their photos and videos. The investigations of the Damietta Center were headed by Major Muhammad al-Meligy, head of the Farskour Investigation Department, and under the supervision of Lieutenant Colonel Ahmed Ghanima, Inspector of the Directorate, in coordination with the Anti-Cyber ​​Crime Investigation Unit, from throwing Khaa, from the city of Rawda in the Faraskour Center in Damietta, was arrested on charges of creating fake accounts, extorting women and asking for money from them or engaging in indecent work, under threat of several pictures that he seized from them.

Where the accused was arrested, after it was found that he was asking a woman to pay 20 thousand pounds in exchange for not publishing her photos, as a police ambush was prepared for him, with the participation of two women who were blackmailed and involved in the process of receiving the money and they were arrested and guided by the aforementioned accused and was arrested, It turned out that he had defrauded and defrauded 15 women, including employees of government institutions, and that he was using their photos to obtain sums of money from them. The accused was arrested and a report of the incident was drawn up.

The Bandar Banha Misdemeanor Court punished the former director of administrative security at Benha University, famous for Antil Benha, with a one-year prison sentence, with enforcement and temporary civil compensation for claimants of civil rights in the sexual video incident.

These were the details of the news From Mahalla to Giza … Al-Anteel is a story of an... for this day. We hope that we have succeeded by giving you the full details and information. To follow all our news, you can subscribe to the alerts system or to one of our different systems to provide you with all that is new.