An antiviral drug stopped the transmission of “Corona” between rodents in... 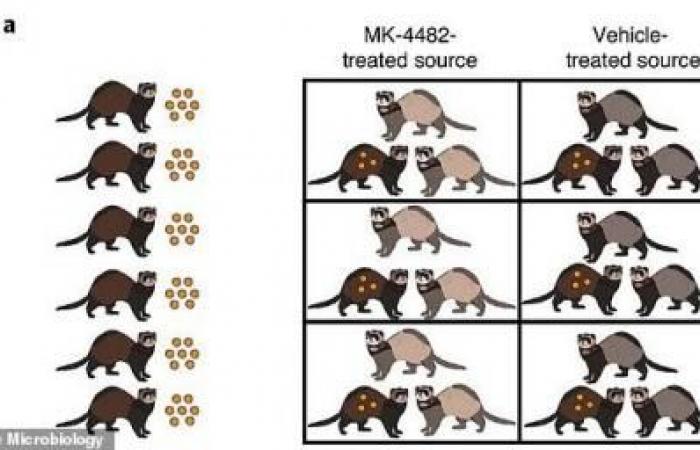 A new study found that an experimental anti-viral drug taken by mouth completely stopped the transmission of the Corona virus within 24 hours among rodents, according to the newspaper “Daily Mail”.
The drug, called molnopiravir, prevents the virus from multiplying, and thus limits its spread throughout the body.
The researchers found that the drug prevented rodents infected with “Covid-19” from spreading the disease, but those who did not take the drug were actually able to transmit the virus.
The team, from Georgia State University, said that if the data could be translated into humans, this means that “Covid-19” patients who receive treatment may become uninfected within a day.
Dr. Richard Plimber, a professor at the Institute of Biomedical Sciences in Georgia, said: “This is the first demonstration of an oral drug available to prevent the rapid transmission of the Corona virus … (Molnopiravir) can be a game-changer.”
This drug is an antiviral that was developed at Emory University in Atlanta. It was originally intended to treat influenza and prevent the virus from copying itself by creating errors during viral RNA replication.
A study conducted in April 2020 found that molnopiravir can prevent and reduce severe lung damage in mice infected with the Corona virus.
The drug is currently undergoing the second – third phase of clinical trials, where it is tested in three different doses every 12 hours for five days in Corona patients, but it is not expected that the results will be available before May 2021 at least.
For the new study, the team tested the ability of molnopiravir to stop the virus from spreading in rodents.
“We think that ferrets are a closely related model of transmission because they spread the virus easily, but they often do not develop severe disease, much like the virus that spreads among young people,” said co-author Dr. Robert Cox.
Researchers infected six rodents with the Corona virus, and administered the drug to three of them. Next, the team took 12 uninfected rodents and placed each two in a cage with one of the animals affected by the disease.
The rodents were tested every day for eight days. None of the rodents that were in cages with the animals that were given the drug were infected with the virus.
However, by the fourth day, all of the incarcerated rodents fell ill with the animals that were not given the drug.
As infections and deaths continue to rise across the United States, stopping the spread of the virus in society will be a key factor in limiting the epidemic until vaccines are widely available.

These were the details of the news An antiviral drug stopped the transmission of “Corona” between rodents in... for this day. We hope that we have succeeded by giving you the full details and information. To follow all our news, you can subscribe to the alerts system or to one of our different systems to provide you with all that is new.