Legion of Honour for Major General 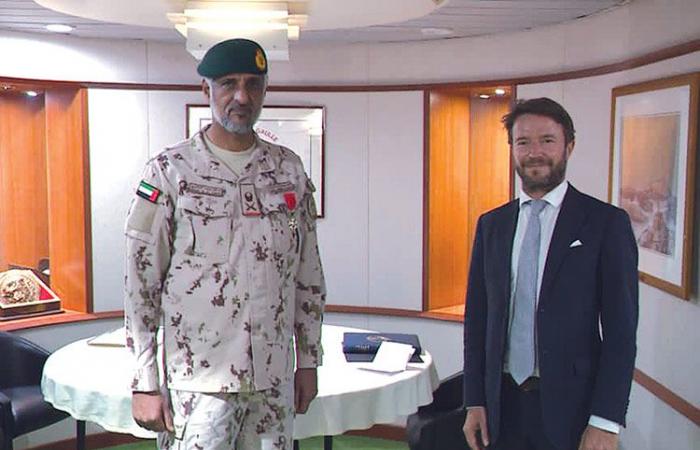 Emmanuel Macron, President of the French Republic, has awarded Major General Saleh Muhammad Al Ameri, Commander of Joint Operations at the Ministry of Defence, the Legion of Honour (Officer), the highest national decoration in France, in recognition of his significant contribution to the advancement of military relations between the UAE and France.

Xavier Chatel, Ambassador of France to the UAE, awarded Major General Al Ameri with the honour during a ceremony onboard the French aircraft carrier Charles De Gaulle anchored off the UAE coasts, in the presence of a number of senior Defence Ministry officers from both sides.

For his part, the Commander of Joint Operations expressed his deep thanks and appreciation to French President Macron for the honour, wishing relations between the two countries to witness further development and progress.

Recently, Sheikh Nahyan Bin Mubarak Al Nahyan, Minister of Tolerance and Coexistence, received in his palace Xavier Chatel, French Ambassador to the UAE, and his delegation.

Sheikh Nahyan welcomed Chatel and his delegation on the occasion of assuming his new duties while wishing him success and a good stay in the UAE.

During the meeting, both sides discussed ways of boosting the strategic ties between the UAE and France to serve their joint interests, and exchanging views on several issues of mutual concern.

They also discussed the developments to the coronavirus (COVID-19) pandemic and the precautionary measures adopted by both countries aimed at addressing any developments or repercussions and curbing the spread of the virus.

Sheikh Nahyan highlighted the strong strategic relations between the two countries, noting that the UAE, under the leadership of President His Highness Sheikh Khalifa Bin Zayed Al Nahyan, is keen to improve its relations with France.

These relations are growing stronger, due to the mutual support and keenness of their leadership, in light of their convergent views on a number of issues and their joint international efforts to promote the values of peace, tolerance, coexistence and human solidarity, he added.

He then pointed out that the UAE has addressed the COVID-19 pandemic by utilising its national efforts and rapid response procedures and ensuring readiness and efficiency in addressing the pandemic’s implications, and by employing a robust detection system to protect the community’s safety.

These were the details of the news Legion of Honour for Major General for this day. We hope that we have succeeded by giving you the full details and information. To follow all our news, you can subscribe to the alerts system or to one of our different systems to provide you with all that is new.