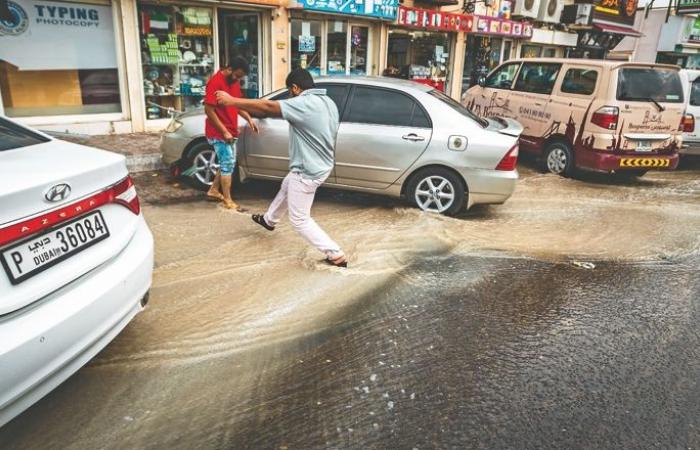 Heavy rains continued to lash the UAE for the second day straight on Saturday, creating mayhem across all emirates. Traffic was thrown out of gear, several roads were flooded, residents were stranded for hours during their commute to and from work, flights got delayed and buildings were waterlogged. The Dubai Media Office called the rain "unusually heavy" and said "rainfall reached 150 mm/hour for two-and-a-half hours", according to preliminary reports. All the authorities concerned came together as one to clear the streets and restore normalcy.

As incessant rains continued well into the evening, air traffic was disrupted. Several flights were delayed, while some had to be diverted. "Flight delays are likely to continue throughout the day (at the Dubai International Airport - DXB). Some flights have been canceled or diverted to DWC (Dubai World Central). Check your flight status on http://dubaiairports.ae or your airline's website," Dubai Airports tweeted on Saturday.

Many residents could not make it to the airport due to road blocks and traffic caused by flooding. "I was supposed to make it to the Sharjah International Airport by 4pm.

Though I started quite early, I got stuck in traffic for three hours and missed my flight," said Ambika Vijayan, a Dubai resident.

"Tried all the ways to Sharjah airport. Could not make it," tweeted a resident, Onur Yalcin.

The heavy downpour turned several roads into 'water ponds'. Authorities worked overtime to reopen some of the key affected roads. Many motorists had to abandon their cars after they got stuck in the middle of the water-logged streets.

Anjali Menon, a resident, said she got stuck near Al Quoz for two hours after her car broke down. "Luckily, I got help from two gentlemen and I had to reverse the car and go back home," said Menon.

Another resident said: "I was out yesterday evening and my car got stuck near Ibn Battutta Mall. I haven't been able to step out today as Discovery Gardens is flooded."

Many roads turned into water pools with torrential rains lashing the emirates of Umm Al Quwain, Ras Al Khaimah and Fujairah. The law enforcement bodies blocked some of the roads, mainly those leading to the mountains and valleys.

A number of houses, roads, and valleys, mainly Wadi Ham in Fujairah and the Etihad Road in Umm Al Quwain, were also flooded with rainwater, and authorities have urged the public to stay cautious and avoid venturing out.

Ras Al Khaimah residents received text messages from the police, advising them to reduce speed while driving and avoid mountain areas. The text message alert tone sounded like an alarm that lasted for several seconds.

"The public have been urged to avoid all the roads to the valleys and mountains for their safety," the RAK Police said in an official statement issued on Saturday morning.

"Owing to the seasonal downpour, the Al Shuhada (Martyrs) Road, and roads leading to Jebel Jais, and Al Kharan Bridge close to Saqr Park have been entirely blocked."
Services disrupted

Several services were disrupted due to the heavy rains. All service centres and driving institutes affiliated to Dubai's Roads and Transport Authority (RTA) were closed until further notice due to the unstable weather conditions.

Taking to Twitter on Saturday, the authority advised residents to take the Metro. "The #DubaiMetro is your best choice to commute in #Dubai smoothly and safely during rainy conditions," it said.

These were the details of the news Dubai - Heavy rains continue to lash UAE for second day for this day. We hope that we have succeeded by giving you the full details and information. To follow all our news, you can subscribe to the alerts system or to one of our different systems to provide you with all that is new.