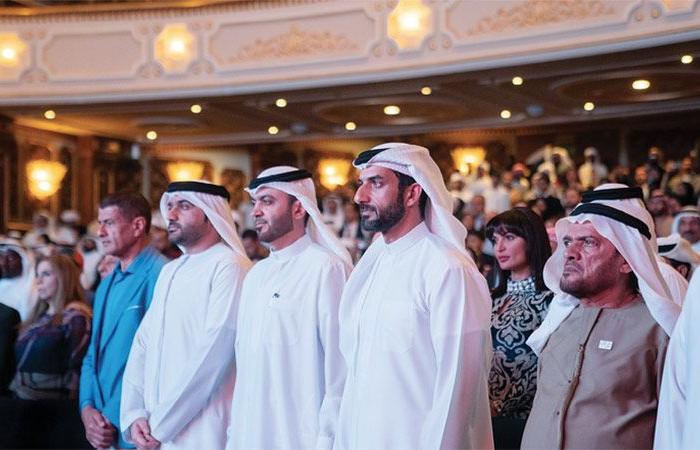 Sharjah Media City (Shams) on Sunday concluded its first of its kind project, the UAE Entertainment Experience with an award presentation ceremony that took place at Sharjah University City Hall. The ceremony recognized 13 winners across different categories, with prizes amounting to approximately Dhs200,000.

Sheikha Al Zarouni from Tolerants received the award for the Best Film Poster. Yousef Zainulddin from Shagaaf won the Best Monteur award. Best Director of Photography award went to Ghassan Younis and Diana Fawaz from Moveiater, while the Best Soundtrack award was presented to Ali Alyousef from Emarati Media.

Ali Al Nuaimi from Emarati Media, Saud Al Suwaidi from The One and Mohammed Aldhahiri from Given4 together shared the Best Team Leader award. Toyelwood was recognized with the Best Creative Ideas awards. The Eastern Sun team won the Audience Vote award, while LB team won the Gold Award for Best Film, followed by the Passion team winning Silver in the same category.

In his speech on the occasion, Dr Khalid Omar Al Midfa, Chairman of Sharjah Media City, highlighted Shams’ continuous efforts in supporting and developing the Emirati art scene. “Shams enhances the infrastructure, turns unique ideas into reality, launches outstanding projects and nurtures talents, to positively align with the vision of the Emirate of Sharjah and support the vision of His Highness Sheikh Dr Sultan bin Muhammad Al Qasimi, Member of the Supreme Council and Ruler of Sharjah,” he said.

Al Midfa added, “Shams understands the importance of collaborating with government and private organizations and the stakeholders to support the cultural and artistic communities in the UAE, introduce new talents, guide them and invest in them, so they can successfully represent the UAE across various platform worldwide.”

He emphasized that the UAE Entertainment Experience is one of the leading projects contributing towards enriching the local art scene. In the future, the project will launch more initiatives to help enhance opportunities in the film industry, whilst helping preserve the national identity and authentic Arab values.

Khulud Abu Homos, CEO of the UAE Entertainment Experience, said that the outstanding public response reflects the passion of better understanding the art industry. She shed light on when the journey began, which was launched under the slogan, “Cinema Begins Here,” and served as a cornerstone for several achievements. She added that within a span of one year, the project has successfully attracted local talents and created active committees across all areas of filmmaking.

She added, “Under the leadership of the dream team, we have managed to use an innovative method of developing and guiding filmmaking talents through 29 experimental films, using one script and different directing visions and ends. We have also developed the initial script of a film inspired by the public, which reflects the pulse of Emirati community. Shooting of the film has commenced and stars Emirati actor Dr. Habib Ghuloum and is directed by Nahla Al Fahad. The film has a unique script and idea, and in due time we will be able to reveal more details about the film.”

These were the details of the news Shams recognises 13 winners across different categories for this day. We hope that we have succeeded by giving you the full details and information. To follow all our news, you can subscribe to the alerts system or to one of our different systems to provide you with all that is new.