YouTube Premium is giving away a free Stadia Premiere Edition 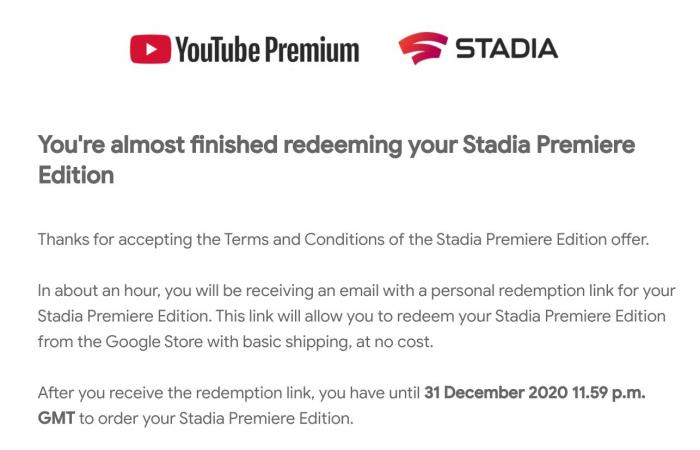 In recent years, Google has been offering perks to its paying YouTube Premium members, such as a free Nest mini speaker. With the latest promotion, YouTube Premium subscribers in the UK can request a Stadia Premiere Edition bundle for free.

Update 3: This offering is currently out of stock in the US but will soon be rolled out to Canada and countries in the EU.

One of the main advantages of Stadia, Google’s game streaming service, is that you can play games on whatever hardware you already have. However, the experience gets better when you get some of Google’s own hardware like the Stadia Controller and Chromecast Ultra that make up the Stadia Premiere Edition bundle.

Whether you’re a long-time Stadia player who hasn’t invested in hardware yet or someone who hasn’t given Stadia a chance, YouTube Premium is here to help you get your hands on a Stadia Premiere Edition bundle. As discovered by

This page has been updated!

If you have YouTube Premium, go check if you're eligible for a free Stadia Premiere Bundle!

you are in the UK and have an active YouTube Premium subscription – you cannot sign up for one before asking now and request the bundle – you are entitled to a free Stadia Premiere Edition. Update 11/10 8:00 a.m.: Overnight, Google extended the campaign to the USA. Residents of other countries may now also be eligible. Just like the UK version, you’ll need an active YouTube Premium subscription, valid before November 6th.

If you are outside of the US and UK and this YouTube Premium Stadia Premiere Edition promo works for you, please let us know in the comments. So far we have confirmed that Canada is not eligible for the free package.

Update 11/10 1:50 p.m.: People at the Stadia subreddit have noticed that Google is preparing to roll this out to more countries soon. We were able to confirm with Google that YouTube Premium members in Canada, France, Germany, Italy and Spain will be able to claim a Stadia Premiere Edition bundle from November 16. Update 11/12 11:45 a.m.: From this morning after

Thanks! We appreciate your interest, but this offer has already ended in the U.S. — stay tuned for other deals and sale opportunities.

promotion ended in the US on November 20th, over a week before the originally stated expiration date. Undoubtedly, this is a prime example of “while supplies last” given the overwhelming popularity of free hardware from Made by Google. To take advantage of the promotion, please visit the official Stadia advertising page and request the offer. Shortly after this, you will receive an email confirming the promo asking you to wait Another Email to redeem the free Stadia Premiere Edition. Until recently, the Stadia Premiere Edition bundle consisted of three Things, the Chromecast Ultra, the Stadia Controller, and a three-month subscription to Stadia Pro. Google recently removed membership from the bundle to bring the price down to just $ 99.99.

Even if you’re not particularly interested in stadiums – although I suggest you give it a try! – This promo is totally worth claiming if you are able to. With the release of the new Chromecast with Google TV, the only way to get a Chromecast Ultra is with the Stadia Premiere Edition. Despite its original release in 2016, the Chromecast Ultra is still a solid device. Additionally, the Stadia Controller is a great game controller even if you don’t use it for Stadia.

This isn’t the first time Google Stadia has tried to target YouTube customers. YouTube Premium subscribers in the UK will receive a free three-month trial of Stadia Pro shortly before its public launch.

These were the details of the news YouTube Premium is giving away a free Stadia Premiere Edition for this day. We hope that we have succeeded by giving you the full details and information. To follow all our news, you can subscribe to the alerts system or to one of our different systems to provide you with all that is new.