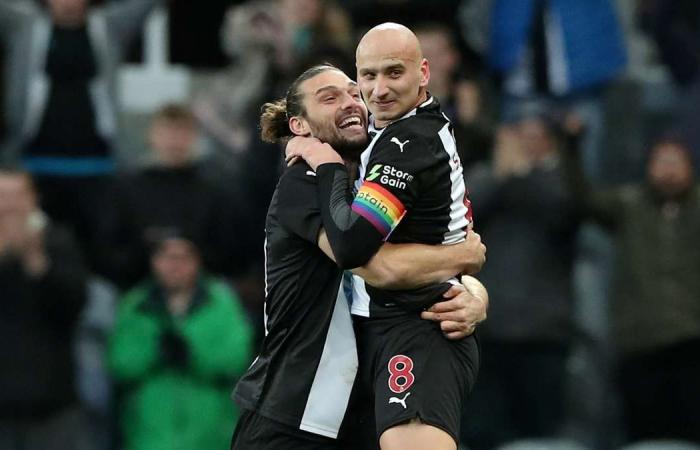 Hind Al Soulia - Riyadh - Newcastle United climbed into the top half of the Premier League table on Sunday after coming from a goal down to beat Southampton 2-1 at St James' Park.

Coming into the tie having scored a miserly 15 goals in 15 games, Newcastle went behind when Southampton striker Ings held off a defender before shooting across keeper Martin Dubravka for his fifth goal in five league games.

The home team had plenty of possession and threatened repeatedly from the flanks but it took the introduction of substitute Andy Carroll to turn the game in their favour.

More used to attacking crosses than putting them in the box, Carroll lofted the ball in from the wing for Shelvey to get up highest to plant the ball in at the far post and even out the scores in the 68th minute.

Roared on by the home crowd, Newcastle went looking for a winner and it came as full time approached when Sean Longstaff's shot from distance was fumbled by Alex McCarthy, but Fernandez was on hand to thump the ball into the back of the net.

Newcastle manager Steve Bruce credited striker Carroll, who has yet to score following his summer return to the club where he made his name, with turning things around for his side.

"The introduction of Big Andy had glimpses today of what he had 10 years ago. He looks well at the moment, big Andy Carroll coming on was a huge help," he said.

Southampton remain in the relegation zone in 18th spot with 15 points, while Newcastle go 10th in the table on 22 points, with goal-scorer Fernandez indicating that they were not done climbing yet.

"We need to enjoy this period and build a winning mentality. You never know where we can arrive at the end of the season, but we take it game by game," he said.

Sheffield United also came from behind to seal a 2-1 win of their own on Sunday, beating fellow promoted side Norwich City at Carrow Road.

Alexander Tettey scored the opener for the hosts after 27 minutes, only for United to strike back after the interval - first through Enda Stevens' 49th-minute equaliser and then George Baldock's winner three minutes later.

The win maintains Sheffield United's fine campaign as the Blades remain in eighth place, while defeat keeps Norwich in the bottom three, four points from safety.

These were the details of the news Steve Bruce lauds 'Big Andy' Carroll as Newcastle United come from behind to beat Southampton for this day. We hope that we have succeeded by giving you the full details and information. To follow all our news, you can subscribe to the alerts system or to one of our different systems to provide you with all that is new.