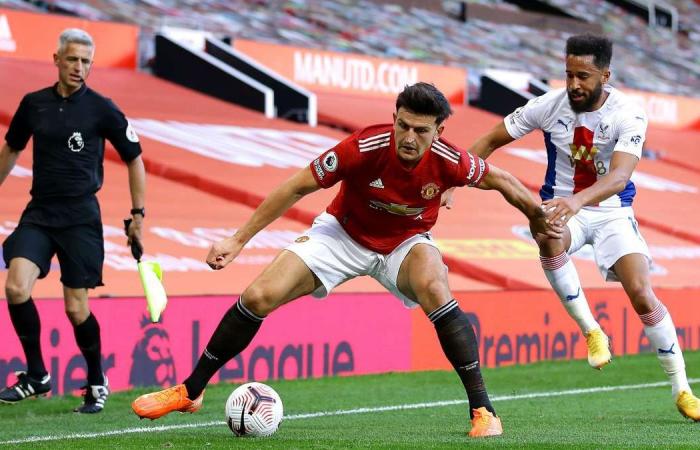 Hind Al Soulia - Riyadh - MANCHESTER UTD RATINGS: David de Gea - 6: Gave ball away after six minutes. Smart save from Ayew at end of first half. And saved a penalty before it was retook. Not easy for him behind a central defence which looked unstable. PA

Tim Fosu-Mensah - 5: In for Aaron Wan Bissaka. Did little. Has pace but we barely saw it. Did well against palace in July but a back up option at best, not the man who should be starting first home league game of he season. Getty

Victor Lindelof - 4: Unnerved by the pace and skill of man of the match Wilfried Zaha in a stuttering first half. Struck a second half chance over. Did nothing to ease the doubts of the many who question if he’s good enough to be in a top, successful team. Conceded a penalty which led to Palace’s second. Harsh decision by VAR, but well beaten for the third goal. PA

Harry Maguire - 4: Captain. But you’d never know it on today’s performance. Put his team at risk. Booked. Uncomfortable afternoon. What’s he going to be like against the world’s best in the Champions League? AFP

Luke Shaw - 4: Played well at Villa in United’s only pre-season friendly but little impact in a team so slow it looked like walking football. PA

Scott McTominay - 4: Started as he had fitness and games to his name but looked rusty as he gave the ball away and skewed a pass to Martial in a rare first half attack. Lost ball too many times in a key positions. Reuters

Paul Pogba - 5: Well off the pace and like he hadn’t had a sufficient pre-season. Which he didn’t. World class talent who struggled with basics. Big players are supposed to have a big influence. An enigma. AP

Daniel James - 4: Worked hard but ineffective and pretty anonymous. Struggled to lift crosses into the box. Off at half time. AFP

Bruno Fernandes - 5: Set the bar high when he arrived. Nowhere near that level against Palace. Ended up playing as a defensive midfielder. Disappointing. Getty

Marcus Rashford - 5: Limited impact and nowhere near his best. Which is why United need more options up front and the players bringing in which the manager wants. AP

Anthony Martial - 5: Frustrated by those around him when he was in decent positions. Has had better days. AFP

SUBS: Mason Greenwood - (On for Daniel 45') 6: Missed free header was one of United’s best chances. . Getty

PALACE RATINGS: Vicente Guaita - 7: Pulled off a handful of good stops to deny speculative efforts from Pogba and Martial. His distribution was wayward at times, but on this occasion, he got away with it. EPA

Joel Ward - 7: The Englishman did a fine job up against Rashford on the right, denying him space and staying tactically disciplined throughout. AP

Cheikhou Kouyate - 7: Considering he is a midfielder by trade, produced an outstanding effort. The Senegalese international was instrumental in shutting down the United attack. PA

Mamadou Sakho - 7: The former Liverpool man was assured in possession, and dominant aerially. On this evidence, he may well force his way back into the side on a regular basis. Getty

Tyrick Mitchell - 6: A couple of errors, but generally speaking, the youngster was solid throughout. . Reuters

Andros Townsend - 8: Took his goal brilliantly, deftly picking out the far corner of the net. His industry up and down the right channel was invaluable. AP

James McArthur - 7: Marshalled the side well from midfield, getting the ball forward quickly and effectively to the dangerous forwards. PA

James McCarthy - 7: Worked his socks off to deny United space. His tactical awareness in shutting down the opposition helped suppress the influence of the Bruno Fernandes.. AFP

Jeffrey Schlupp - 8: An all-action display from the winger, whose craft and determination set up Townsend’s opener. He provided a constant out-ball for Palace, and often instigated dangerous counter attacks. Reuters

Wilfried Zaha - 9: Back to his menacing best. He buried the retaken penalty with ease, before unleashing a wonderful effort from just outside the box to seal the win in style. AFP

Jordan Ayew - 6: Should really have bagged a couple of goals today, after wasting a number of promising chances, and missing a second half penalty that was retaken and scored by Zaha. Getty

SUBS: Eberechi Eze - (On for Schlupp 75') 6: One decent opportunity late on, but couldn’t quite get the ball from out under his feet. Getty

Michy Batshuayi - (on for Ayew 81') NA: Held the ball up well toward the end as Palace closed out the win. PA

These were the details of the news Harry Maguire 4, Paul Pogba 5; Wilfried Zaha 9: Manchester United v Crystal Palace player ratings for this day. We hope that we have succeeded by giving you the full details and information. To follow all our news, you can subscribe to the alerts system or to one of our different systems to provide you with all that is new.