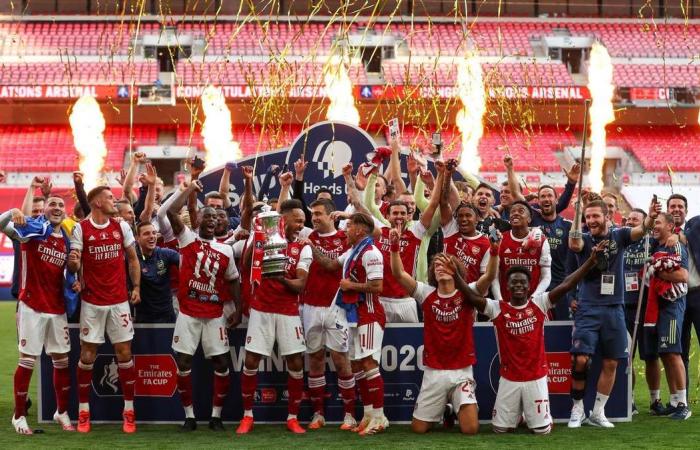 Rob Holding - 6: Like the rest of Arsenal's defence, struggled to contain Pulisic. Would have been delighted to see the American carried from pitch just after break. EPA

David Luiz - 7: Not as impressive as his semi-final showing but a good effort nonetheless from the Brazilian. Getty

Kieran Tierney - 7: Couldn't stop Pulisic scoring opening goal but produced good performance on the left of a back three. Was always looking to get Aubameyang away down the left. Getty

Dani Ceballos - 8: Some quality passing from midfield by the Spaniard who ran Aubameyang close for man of the match. PA

Nicolas Pepe - 6: Fabulous finish in first half but was denied goal as Aumameyang had been flagged offside earlier in move. Typical performance from the £72 million (Dh346m) man - flashes of quality but also lack of consistency with final product. Getty

Alexandre Lacazette - 6: Cracked free-kick well wide when perfectly placed outside the box. Few other chances to shine from the French attacker. Getty

Pierre-Emerick Aubameyang - 8: Headed very good early chance wide. Drew foul from Azpilicueta to win penalty then produced ultra-cool finish from the spot to make the score 1-1. Skipped past Zouma like he wasn't there before brilliant chip for second goal. Getty

CHELSEA PLAYER RATINGS: Willy Caballero - 6: Sent wrong way on penalty, then beaten by chipped finish for second but not to blame for either goal. Getty

Cesar Azpilicueta - 5: Tough old final for Spaniard. Booked for clumsy foul on Aubameyang that gifted Arsenal chance to equalise from the spot. Limped off the pitch with what looked like a pulled hamstring just after the half-hour mark. AFP

Mateo Kovacic - 7: Poor decision saw him given second yellow in second half and sent-off. Had been playing well in midfield. Reuters

Jorginho - 6: Blazed glorious chance over the bar in first half. Getty

Mason Mount - 6: Saw early curling shot saved by Martinez after just three minutes and played a key role in opening goal. Him and Pulisic ran Arsenal ragged at early in the game. Influence waned as match went on Getty

Christian Pulisic - 8: Showed lovely quick feet and a composed finish to become the first American to score in FA Cup final. Tormented Arsenal coming inside from wide positions early on. Appeared to pull hamstring when shooting wide early in second half and was helped from pitch in agony. EPA

SUBS: Andreas Christensen (On for Pulisic 35') 6: Early introduction after Pulisic's injury and did OK but loss of American cost Chelsea their biggest attacking threat. Getty

Pedro - (On for Pulisic 49') 6: Sad end to Chelsea career for Roma-bound Spaniard who was stretchered off the pitch and needed oxygen after picking up what looked like a dislocated shoulder. Reuters

These were the details of the news Pierre-Emerick Aubameyang 8, Dani Ceballos 8: Cesar Azpilicueta 5: Arsenal v Chelsea FA Cup final player ratings for this day. We hope that we have succeeded by giving you the full details and information. To follow all our news, you can subscribe to the alerts system or to one of our different systems to provide you with all that is new.