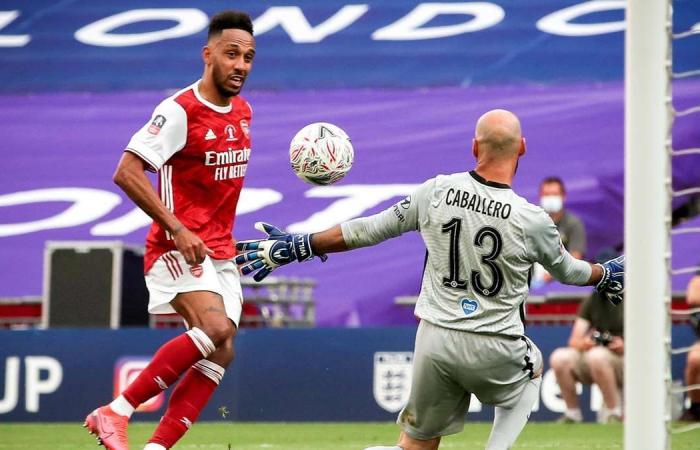 Hind Al Soulia - Riyadh - If this proves to be Pierre-Emerick Aubameyang’s final act in an Arsenal shirt, it was quite a way to go. The captain’s brace included a superlative winner, secured Arsenal a record 14th FA Cup and booked them a place in Europe.

More than anyone, a player who has been starved of silverware in his career deserved this. Aubameyang followed a semi-final double with a stunning sequel.

For Mikel Arteta, the first man to win the competition as both player and manager since Roberto Di Matteo in 2012, a comeback capped an auspicious first eight months in charge of Arsenal. Glory may give him a greater budget and bigger chance of persuading Aubameyang to extend his stay in London.

For Frank Lampard, however, it was a day that started brilliantly and ended badly. Chelsea’s manager lost his goalscorer, Christian Pulisic, and his captain, Cesar Azpilicueta, to hamstring injuries.

He lost arguably their player of the year, Mateo Kovacic, who became just the sixth footballer to be sent off in the FA Cup final and whose second yellow card, awarded for a foul on Granit Xhaka, felt harsh.

The fifth, Victor Moses, was also dismissed by Anthony Taylor when Arsenal beat Chelsea in 2017. This was an unwanted action replay for those from west London. In other respects, it was a day with a difference, the first FA Cup final to be played without fans – even in the 1870s, there were small crowds – and one where a manager, Arteta, was shown a yellow card.

It was open and entertaining from the start; Arteta transformed the first half with his intervention at the drinks break. The second period was more of a slow-burner until Aubameyang intervened.

Arteta had preferred Ainsley Maitland-Niles to Bukayo Saka, rewarding the older man for his excellent performance in the semi-final win over Manchester City, and he almost reaped an early reward. Maitland-Niles did wonderfully well to find room to cross in the third minute and Aubameyang headed over the bar.

Yet Chelsea soon assumed the initiative. Mason Mount continued the fine form he displayed against Wolves to secure their top-four finish. A fourth-minute curler drew a save from Emi Martinez. Two minutes later, his side were ahead.

Pulisic was involved twice in a swift break. His crucial contribution was to dink a shot beyond Emi Martinez after Olivier Giroud had backheeled Mount’s pass into his path.

With each of the front three involved, Chelsea were not missing the injured Willian then. Perhaps they were when Pulisic departed and Lampard had to summon Pedro, six days after it seemed the Spaniard had played his final Chelsea game. There was an unhappy ending for him, too, stretchered off in injury time with a shoulder problem.

For the Pennsylvanian Pulisic, the distinction of the becoming the first American to score in the FA Cup final. He has spent summer looking increasingly like the successor to Eden Hazard. Vibrant and elusive, he is shaping up as a £58 million (Dh278m) bargain, but his afternoon came to a painful and premature end; as he sped through for his third shot at goal, he suffered pulled up in pain.

Perhaps the balance of power shifted with his exit, though Arsenal had already brought themselves back into the game. The excellent Dani Ceballos drove a free kick over the bar and Alexandre Lacazette later drilled one wide, though Chelsea’s propensity to foul Nicolas Pepe in the final third created them difficulties. Pepe himself thought he had levelled with a wonderful finish from the edge of the box, but the offside flag had long been raised.

The equaliser, though, came after another fleet-footed forward was brought down. It was a ploy of Arteta’s to exploit Chelsea’s high defensive line. Maitland-Niles’ running power was part of the strategy.

Then Aubameyang’s raw speed produced a penalty. He was dragged down by Azpilicueta, an offence that began outside the box and ended inside. Aubameyang converted the spot kick himself, sending the penalty specialist Willy Caballero the wrong way. The Argentinian had been selected instead of Kepa Arrizabalaga, underlining how the world’s most expensive goalkeeper is now a reserve. Chelsea’s day also endured an afternoon to forget: booked for his part in the penalty, and arguably given the benefit of the doubt when Arteta seemed to be calling for a red card, Azpilicueta left the pitch in tears after being hurt.

And in his absence Andreas Christensen looked less assured on the right of the back three as Aubameyang was in space more often. His second was a superlative goal. Hector Bellerin led a counter-attack, Pepe picked out Aubameyang and he jinked past Kurt Zouma before flicking a shot over Caballero.

There was time for a further talking point, with Chelsea wondering loudly if Martinez had handled outside his box. Taylor ruled he had not and instead Aubameyang’s hands were soon on the FA Cup.

These were the details of the news Pierre-Emerick Aubameyang powers Arsenal to record 14th FA Cup win and spot in Europe for this day. We hope that we have succeeded by giving you the full details and information. To follow all our news, you can subscribe to the alerts system or to one of our different systems to provide you with all that is new.