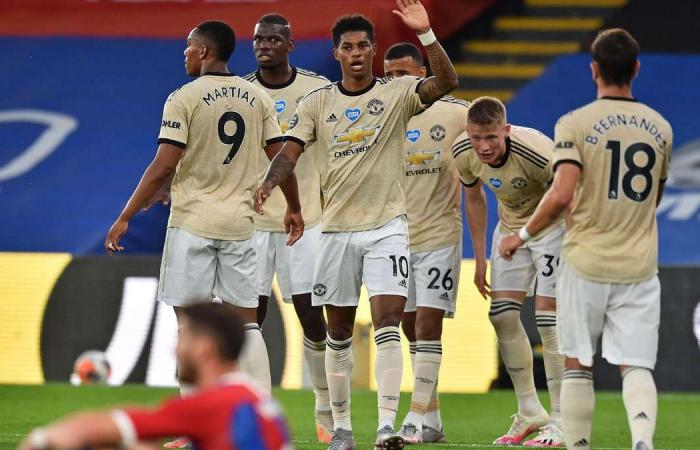 Mamadou Sakho - 6: Looked a bit slow and cumbersome at times against United's pace up front but stuck to his task and made a few crunching challenges. Cleared off line to stop United scoring a third late on. EPA

Scott Dann - 7: Couldn't stop Martial scoring United's wonderful second goal. Played really well at the back, showed good composure carrying the ball out of the defence and made some important challenges. Getty

Patrick van Aanholt - 6: Left on his backside by some wonderful skill by Rashford when United attacker opened scoring. Found some joy attacking down the left with McArthur. Was carried off the pitch in agony after colliding with Martial when the Frenchman scored second goal. Getty

Luka Milivojevic - 6: His passing radar was off-kilter at times and picked up a booking but his brilliant, curling free-kick forced an equally impressive one-handed save from De Gea in first half. Reuters

James McCarthy - 6: Got on end of good Palace move in second half but his shot was saved comfortably by De Gea. Was on receiving end of nasty challenge from Wan-Bisaka that earned the United defender a booking. Getty

James McArthur - 7: Caused United problems with his crosses from the left in first half and showed some nice touches. Should have done better in second half when crossed to no one instead of attacking the goal. Getty

Wilfried Zaha - 7: Cut inside Wan-Bisaka and forced good save from De Gea in first two minutes. Saw claims of first-half penalty waved away by referee after coming together with Lindelof. Went close with second-half chance but United were 2-0 up by that point. AFP

Jordan Ayew - 6: Blasted first-half chance straight at De Gea. Offisde by the tightest of margins when he fired home a Zaha cross-cum-shot at back post after break. AFP

SUBS: Jeffrey Schlupp - (On for McArthur 73') 6: Injury-plagued midfielder will have been relieved to be back on the pitch. Getty

MANCHESTER UNITED RATINGS: David de Gea - 7: Excellent save from free kick before break and a couple of key stops in second half. Another clean sheet and no errors. PA

Aaron Wan-Bissaka - 7: Drilled shot with weaker left foot after 28 minutes against his old team. Booked for a lunge on McCarthy but always roved forward. AFP

Victor Lindelof - 6: Looked great minute and ropey the next. The same can be said of several players, but another clean sheet for the defence – the 13th in this 19 game unbeaten run. PA

Tim Fosu-Mensah 7: First United start in more than three years for the 22-year-old. Played out of position on left because of injuries. And he did OK. Getty

Scott McTominay - 6: Replaced Matic and started ahead of Fred. Steady enough for underpar side against another side lower in the table who raised their game. PA

Paul Pogba - 6: Quieter, gave the ball away too much and his subdued performance indicative of United in the last three games. But United are winning with him at the heart of the team where nobody came close to his 101 touches. Getty

Bruno Fernandes - 7: Less energy than a couple of weeks ago, though he got more lively as game went on, coming to life as he assisted the first. Hit post after 74 minutes following a brilliant counter. More shots and tackles than any player. AFP

Mason Greenwood - 5: Didn't get going, didn't track back with Van Arnholt as Palace overloaded on left. Made a couple of key passes though and scuffed a chance in first half. AFP

Marcus Rashford - 8: Quiet, then scored just before break after Palace appealed for a penalty. Cool as he side-footed in for 22nd goal of season. Should have scored a second on the hour but weak shot saved. Made incredible 40 yard run in a late counter to set up Fernandes. . AFP

Anthony Martial - 7: Anther goal, his 22nd of season, with 17 of those in the league. Vital to United’s counter attacks and decisive link-up play with Rashford. AFP

SUBS: Jesse Lingard - (On for Greenwood 62') 6: Brought on as he's more adept at defensive work than Greenwood. Reuters

Nemanja Matic - (On for McTominay 63') 6: Caught out once but otherwise OK. PA

These were the details of the news Marcus Rashford 8, Mason Greenwood 5; Wilfried Zaha 7: Crystal Palace v Manchester United player ratings for this day. We hope that we have succeeded by giving you the full details and information. To follow all our news, you can subscribe to the alerts system or to one of our different systems to provide you with all that is new.