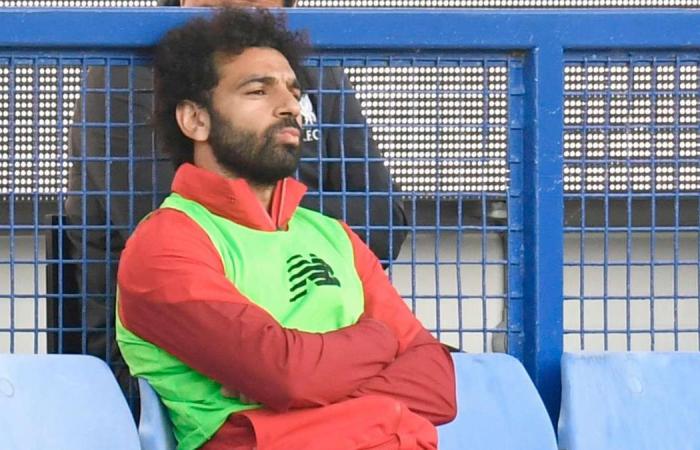 Thank you for your reading and interest in the news Anthony Gordon 6, Mohamed Salah benched, Takumi Minamino 4: Everton v Liverpool player ratings and now with details

Hind Al Soulia - Riyadh - Jordan Pickford – 6, Everton’s England goalkeeper was only really stretched in injury time at the end of the game, when he tipped over Fabinio’s free kick. PA

Seamus Coleman - 8, Fine tackle to thwart Joe Gomez at the start of the second half, and coped admirably with the threat of Sadio Mane. AFP

Mason Holgate - 7, At the heart of the Everton rearguard, and he snubbed out the threat of Liverpool’s forward line well. AP

Michael Keane - 6, Only really noticeable when he was booked for upending Mane when the Reds forward was on the charge in the first half. AFP

Lucas Digne - 7, Unlucky to be cautioned for what seemed a neat slide tackle on Mane after the break. EPA

Anthony Gordon – 6, Not exactly the dream first Premier League start for the 19 year old Liverpudlian, but he did little wrong before being subbed on the hour. PA

Andre Gomes – 7, It was his excellence that created the chance that eventually led to chances for Dominic Calvert-Lewin and Tom Davies. AP

Tom Davies - 7, Had the chance to steal it for the home side, but saw his shot deflect off Gomes onto the post. EPA

Alex Iwobi – 5, Little chance to express himself going forward. Could do with introducing himself to Richarlison, who ignored him when he was well placed in favour of shooting himself. AFP

Richarlison – 6, A threat up front, but his reckless late foul on Alex Oxlade-Chamberlain might have cost his side. EPA

Dominic Calvert-Lewin – 8, Clever flick brought a fine save from Alisson, and he was industrious throughout. He would have received a rousing ovation had there been a crowd present when he was subbed right before the end. AP

Gylfi Sigurdsson (sub) - 6, Given 30 minutes, but it didn’t prove enough time for him to make a difference. AFP

Alisson Becker – 7, A mere spectator for 80 minutes, then did everything asked of him to keep out Calvert-Lewin and Richarlison in quick succession – while the post also helped him out. AP

Trent Alexander-Arnold – 6, Did his best to forge openings, but his imprecision on some crosses and through balls suggested rustiness. EPA

Joel Matip - 7, Totally unflustered as he works his way back from injury – only to succumb to a new one in the second half. AP

Virgil van Dijk – 7, Might have been bored by what he was watching for much of it, so little did he have to do, until a late surge by the hosts. PA

James Milner - 5, Filling in for Andy Robertson at left back, he was booked in the 20th minute for a foul on Richarlison, and exited injured before half time. PA

Jordan Henderson – 7, Liverpool had 70 per cent of the possession, and it felt like Henderson had most of that, but he struggled to pick a way through the organised ranks of Everton defences. EPA

Fabinho - 7, Made a loose start, but could have been the hero at the end as his injury-time free-kick brought a fingertip save from Pickford. AFP

Naby Keita - 7, At the time he was replaced in the second half, the midfielder had arguably been Liverpool’s brightest spark. Fashioned a chance for himself early in the second phase. PA

Takumi Minamino - 4, Big boots to fill standing in for Mohamed Salah, and the Japanese forward looked overawed by it. Subbed at half time by Alex Oxlade-Chamberlain. AP

Roberto Firmino – 5, The Brazilian forward was anonymous, which is perhaps forgivable given the surreal circumstances. EPA

Sadio Mane – 7, Well shackled by Coleman, and someway short of his best, but it always felt as though he was a threat. AP

Joe Gomez - (sub) 8, Only the understudy to the understudy, but he played a key role after replacing Milner before half time. First as an attacking weapon down the left flank, and then with an important touch to knock Davies’ shot onto the post. PA

Alex Oxlade-Chamberlain - (sub) 7, Introduced at half time, and left it late for his major impact – a run that was unceremoniously ended by Richarlison in a dangerous position. EPA

Georginio Wijnaldum - (sub) 6, On for Naby Keita, without quite enough time to make an impression

Divock Origi - (sub) 5, He became the fourth substitute used by Jurgen Klopp, when he came on for Firmino. Only moment of note was when he was booked

Dejan Lovren, - (sub) 4, Had the unusual honour of becoming Liverpool’s fifth sub. In a competitive game. Which was weird. Had just enough time to give Reds’ fans jitters. AP

These were the details of the news Anthony Gordon 6, Mohamed Salah benched, Takumi Minamino 4: Everton v Liverpool player ratings for this day. We hope that we have succeeded by giving you the full details and information. To follow all our news, you can subscribe to the alerts system or to one of our different systems to provide you with all that is new.