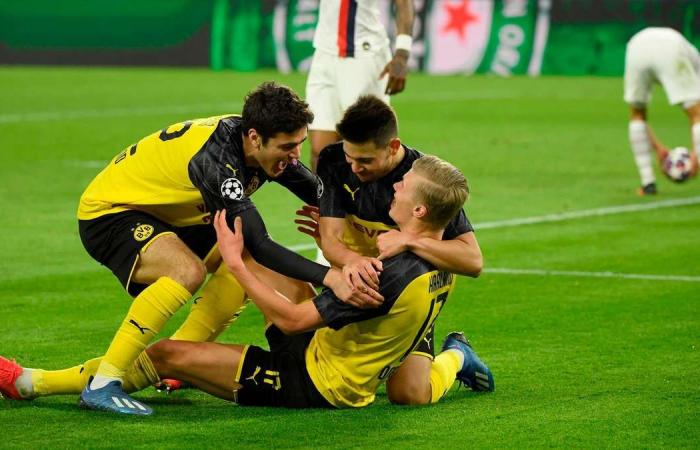 Thank you for your reading and interest in the news Teenager Erling Haaland passes goals milestone quicker than Lionel Messi, Kylian Mbappe and Cristiano Ronaldo and now with details

Hind Al Soulia - Riyadh - Teenage record-breaker Erling Braut Haaland warned Borussia Dortmund still have it all to do to reach the Champions League quarter-finals even after his two goals sank Paris Saint-Germain.

Haaland netted either side of a Neymar equaliser as the Brazilian superstar scored on his return from injury as the French champions crashed to a 2-1 defeat at Dortmund in the last 16, first leg tie.

His latest goals mean he has reached double figures in the Champions League four games faster than any other player in the competition's history, and is the only teenager to reach double figures in a single season, surpassing Cristiano Ronaldo, Lionel Messi, and Kylian Mbappe.

"We want to go through, it's going to be a hard game," Haaland said of the return leg in Paris on March 11, "but we are a good team.

"The result is quite a dangerous one, as Paris has a very strong team and can still go through in the return leg."

Despite the attacking prowess, Haaland's team-mate Emre Can, who alongside Axel Witsel worked tirelessly in Dortmund's midfield to contain Neymar and Mbappe, said the home side's defence had been key.

"It was a big statement from the team how we defended today. We know it's not over - it's just half-time," said Can, whose permanent transfer from Juventus was confirmed.

However, the night belonged Haaland who warned there is more to come. "I feel like I still can do a lot better," he said. "I have to work hard to improve to play better at this level."

Having also scored eight goals for Salzburg in the group stages before his 20 million-euro (Dh80m) transfer to Dortmund, he now has 39 times in 29 games this season for Salzburg and Dortmund.

His incredible strike for his second goal on Tuesday overshadowed Neymar's return from a rib injury with PSG desperate to break their last 16 jinx having exited at this stage in the competition in each of the last three seasons.

"We weren't intense enough with or without the ball and did a lot of things badly, however the goal we got is important for the second leg," he said.

The presence of the world's most expensive player was a major boost for his team, after Neymar missed last season's surprise last-16 loss to Manchester United with a foot injury.

He also sat out the second leg of their defeat by Real Madrid at the same stage in 2018.

PSG's German coach Thomas Tuchel admitted Neymar's lack of match fitness had been a factor in the away defeat, but said his team still has time to find their form.

"Neymar hadn't played for a fortnight, but he is very important for Kylian (Mbappe), there is harmony between them and if Neymar lacks rhythm, it's immediately noticeable," said Tuchel.

"We didn't have enough possession, we made too many easy mistakes, we weren't smart enough and we lost the ball too early.

"It's difficult, but it's 2-1 and we still have a few games left to get back into the rhythm."

His counterpart Lucien Favre echoed Haaland's insistence that the result gives Dortmund only a slender advantage with PSG's passionate home fans set to get behind their team in the return leg.

"Of course it's a dangerous result, but we played well in both defence and attack," said Dortmund's Swiss coach. "However, as things stand it's 2-1 to us."

These were the details of the news Teenager Erling Haaland passes goals milestone quicker than Lionel Messi, Kylian Mbappe and Cristiano Ronaldo for this day. We hope that we have succeeded by giving you the full details and information. To follow all our news, you can subscribe to the alerts system or to one of our different systems to provide you with all that is new.