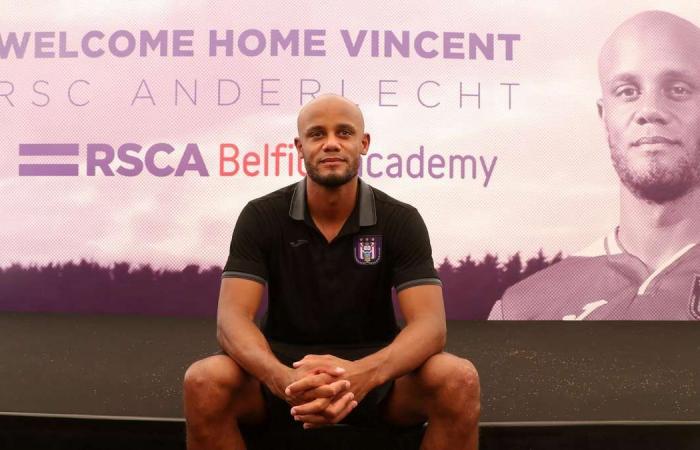 Hind Al Soulia - Riyadh - When Vincent Kompany announced last summer that he was leaving the sky blue of Manchester City for the purple and white of Anderlecht, it seemed like a match made in heaven.

Kompany had just captained Pep Guardiola’s side to a thrilling Premier League title victory after a relentless toe-to-toe battle with Liverpool.

The 33-year-old was the heartbeat of City’s resurgence under its Abu Dhabi owners which had seen four league titles, two FA Cups and four League Cups added to a club trophy room that had been gathering little more than dust for decades.

And the next chapter would see him returning to the start of his story - back at his old club in Belgium but in a notoriously difficult player-manager role.

In the previous campaign, they had failed to qualify for Europe for the first time in 56 years, had points deducted for crowd trouble, were raided by the police in connection with a money-laundering investigation and saw fans’ frustrations with billionaire owner Marc Coucke begin to fester.

But, according to sporting director Michel Verschueren, with Kompany’s return the club had “achieved something that everyone thought was impossible … Vincent has purple blood”.

The man himself was equally bullish about what could be achieved. “I feel I can start something incredible here,” he said at his unveiling in June.

Fast forward seven months and Anderlecht sit ninth out of 16 in the Belgian Division A, a massive 22 points behind leaders Club Brugge, who they face on Sunday in the first round of games following a winter break.

All is not well under the reign of king Kompany and the season has been a sorry mess of struggles on the pitch, coupled with confusion off it.

Goals have been a problem with just 24 scored, the sixth lowest total in the division. Former Tottenham midfielder Nacer Chadli - on loan from Monaco - is top scorer with seven, while attacker Kemar Roofe - a €6.8m (Dh27.8m) summer signing from English second-tier side Leeds United - has six.

The club suffered their worst start to the season for 22 years - two points from four games - and Kompany took a step back from managerial duties by handing over match-day reins to his Welsh assistant Simon Davies.

“If Vinnie can be the best player in the league, which he is, and lead on the field, I can take responsibility for … how we play, and if we need to change shape during the game,” said Davies.

Kompany also took over the captain’s armband from another summer signing Samir Nasri, his experienced, if reliably unreliable former teammate at City.

After a disappointing goalless draw with Waasland-Beveren at the end of September, fans had protested outside the ground, their frustrations seemingly aimed at the club’s board, rather than the player-manager.

Within a few days, the panic button had been pressed. Davies was demoted back down to assistant manager, technical director Frank Arnesen - instrumental in Kompany’s return - was sacked and former Anderlecht manager Frank Vercauteren appointed to steady the ship.

A club statement said the 63-year-old Belgian was coming in to act as "consultant" for Kompany's "innovative project" and “will obviously bear full responsibility on match days”.

Just to add to the chaos, Anderlecht were fined €5,000 by the Belgian FA for allowing Kompany to coach without the required Uefa Pro License.

It was all hardly a ringing endorsement of his early months in charge.

On his arrival at the club, Kopmany had made clear that “returning as a player only was not an option”. A few months later, the message seemed to have changed. “There’s some misconception about my role,“ he told The Guardian newspaper. ”The classical role of manager … is not what I do. I’m a player as well.”

Kompany also maintained that the “project” was unchanged. “I’ve analysed and cross-checked and made sure the plan is entirely achievable. So … nothing will change my mind. I won’t compromise,” he said.

Initial results after Vercauteren’s arrival were positive as Anderlecht embarked on a seven-game unbeaten run to release the pressure valve on their beleaguered player-manager.

A 4-1 thrashing of Sint-Truidense on October 20 - with Chadli scoring twice and Roofe also on target – seemed to suggest a corner had been turned.

But consistency continued to prove elusive and Kompany’s old injury problems resurfaced, restricting him to just eight appearances. Hopes of a return to European competition next season look slim at best.

Kompany insists Anderlecht are heading in the right direction.

"I know what we want to do,” he said before the winter break. “If we can bring this [style of] football and we can become constant, then we will eventually be where we need to be. If that hurts now, then so be it. We are still far from our goal.”

Whether Anderlecht’s owners and fans have the pain threshold - and patience - to allow the Kompany project to continue while results fail to improve, remains to be seen.

These were the details of the news Vincent Kompany's Anderlecht reign finds a sorry mess of struggles on the pitch and confusion off it for this day. We hope that we have succeeded by giving you the full details and information. To follow all our news, you can subscribe to the alerts system or to one of our different systems to provide you with all that is new.