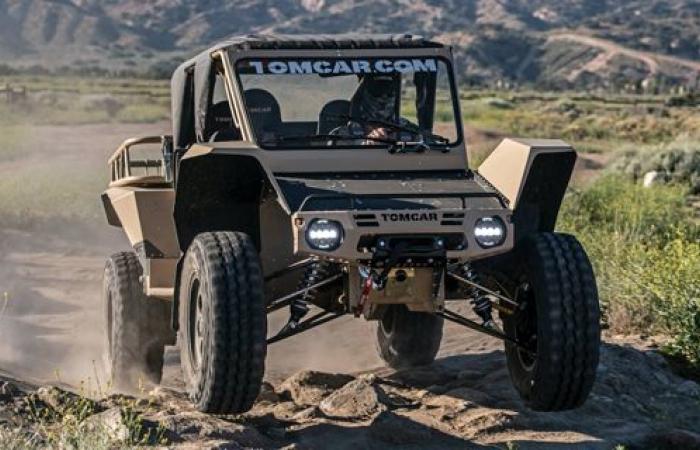 The Israeli company Tomkar is about to set up the first car factory in the UAE: The Israeli company is conducting advanced negotiations to set up a train factory in Dubai, together with local partners, for the civilian and security market. The agreement to build the factory will produce SUVs based on kits from the company’s new plant. B, expected by the end of the year.

The new assembly line is part of Tomcar’s new partnership with two American companies, the consulting firm Compromise Solutions, and Prince Manifaculture, a subcontractor of the U.S. military and civilian automotive industry, which will integrate Tomcar vehicles into its plants in Asheville, North Carolina, El Paso Texas, and Ciudad Juarez, Mexico, with a production capacity of thousands of units per year.

Both companies are owned by American businessman Eric Prince, a former fighter and commander in the U.S. Navy’s SEALS commando unit. Prince is the founder of American Blackwater, a security consulting firm and security contractor specializing in recruiting special forces veterans, who was severely criticized in 2007 after some of its employees murdered 14 innocent Iraqi civilians in Baghdad.

Tomkar was founded in the 1980s by Yoram Zarchi, who owned a pipe factory in Kibbutz Givat Hashlosha, and wanted to build a buggy for his son Tom. Zarhi, who is not a car engineer, but has gained a lot of experience in the field of mobility in the IDF, built a series of racing and recreational vehicles, and has since manufactured more than 3,000 vehicles. These were purchased by tour companies, 16 years old who used their license in Israel as tractors, hunters and hikers. “B, and bodies in the institutional market, from mining companies, to the IDF, the Border Police, and special forces around the world.

The carrying capacity and stability have given Tomcar in recent years a unique role: several tools were acquired by the major film studios in the United States for carrying cameras, and were, among other things, part of the filming of Marvel films.

Tomcar currently has a production capacity of a few hundred vehicles a year, at its development center in Hill Three, and a plant in Phoenix Arizona, both of which will continue to operate and manufacture for special orders. Two years ago, Tomcar launched a new series of models, the TX, for the first time with dual propulsion, which further improved their off-road capabilities.

Tomcar recently signed a first deal with the U.S. Marine Corps, the Marines, thanks in part to the connection to Compre, which represents several Israeli defense companies, and to Prince, who enjoys strong ties to the U.S. security community. U.S. production should also help the IDF increase its procurement of tools Rafael, who demonstrated Tomcar carries spike missiles, and IAI are also expected to purchase tools from American manufacturing, as part of deals to sell armaments and systems to their customers.

Tomcar will soon launch the TX with 1,500 cc General Motors gasoline and diesel engines, which will be mated to the existing continuous automatic transmission, in addition to the electric version of the tool. American engines will replace weaker Chinese-made engines the company currently uses, and will be mated to the continuous automatic transmission Its recently improved.

“We are also launching a version with a wider cabin that fits American body dimensions, and a pickup truck that easily converts into a 4-seater SUV,” Ram Zarchi, Yoram’s son, who serves as CEO of Tomcar USA, told Calcalist. “The TX is capable of carrying a ton of cargo, more than any other vehicle of its size. Apart from the security market, there is a demand in the civilian market for a firefighting version of the vehicle, and on the part of space enthusiasts looking for a really tough vehicle, with a ‘no bullshit’ approach. “Closed and air-conditioned. Our goal is to be the Ferrari of the terrain, not Toyota.”

Little Leshem, who co-founded Comprim with Prince, said Tomcar’s benefits are well known in IDF special units that have used these unique tools for the past 20 years. After acquaintance and personal accompaniment I am happy to lead Tomcar on a paved path into the largest security market in the world. The deal with the Marines is just the beginning. ”

Prince said that “Prince is excited to bring the Tomkar Gospel to the world. We bring with us over 55 years of experience and a glorious family heritage.”

It should be noted that Tomcar’s past expansion attempts, through its sale to the Markstone Foundation, and collaboration with the Indian Maine, have not gone well. This time, the Zarchi family will retain control of the company.

These were the details of the news The Israeli Tomcar will set up a car factory in Dubai,... for this day. We hope that we have succeeded by giving you the full details and information. To follow all our news, you can subscribe to the alerts system or to one of our different systems to provide you with all that is new.