OPEC Plus is silently working to mend the rift between Saudi... 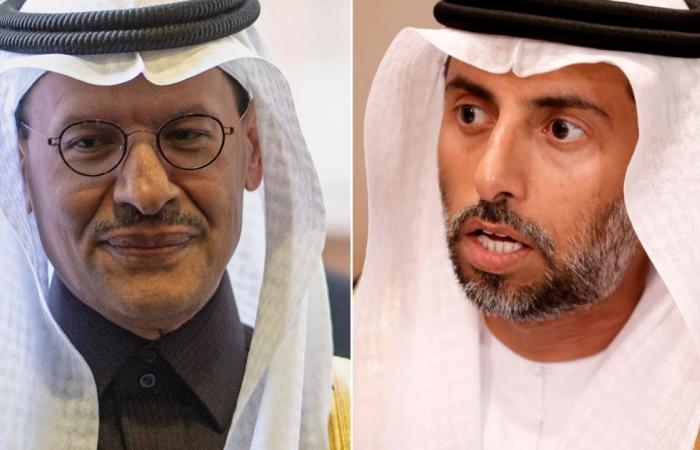 He said report In Bloomberg, OPEC + is silently working to mend the rift at the heart of the oil alliance, to resolve a dispute between Saudi Arabia and the United Arab Emirates over the amount of crude oil that must be pumped in the new year.

For its part, Reuters quoted sources in the Organization of Petroleum Exporting Countries (OPEC) as saying that Saudi Arabia is frustrated with the UAE because of its refusal to reduce oil supplies. The sources added that the UAE emerged this week from under the wing of Saudi influence in OPEC.

The agency reported – quoting a source – that because of this frustration, Saudi Energy Minister Prince Abdulaziz bin Salman offered to step down from the position of Deputy Chairman of the Joint Ministerial Monitoring Committee in OPEC.

The position of Vice President was offered to the UAE, but it did not want it. One of the sources stated that the Saudi minister is very upset, but he will not deviate from consensus.

On Monday, the Bloomberg report said, differences between the Saudis and the Emiratis prevented a clear agreement on whether to delay the planned production increase.

A rift has emerged between the Gulf exporters, as Abu Dhabi pursues a more independent oil policy.

Delegates spent the day consulting with their governments and exchanging ideas over the phone. After the failed talks exposed a dangerous rift in the alliance’s core, OPEC and its partners are quietly working to repair the damage.

The main players in the 23-nation coalition are making diplomatic efforts to resolve the conflict, and they need to reach a compromise before a cabinet meeting on Thursday, which has been delayed by the impasse.

OPEC Plus is an alliance of 13 OPEC countries and 10 of the world’s major oil-exporting countries outside of OPEC.

The report said that the Organization of the Petroleum Exporting Countries (OPEC) and its partners suffered this year from an unprecedented recession in the oil market, which reduced production with the decline in demand following the Corona virus epidemic. If her deal collapses, prices will fall again.

“OPEC Plus often generates drama, and this time tensions are running high,” said Halima Croft, chief commodity strategist at Royal Canadian Bank (RBC), “but we still believe the group will likely find some compromises to save water.” Flip, with a short extension of the current cuts to be the most likely outcome. ”

Most countries preferred in Monday’s online session to postpone the daily supply increase of 1.9 million barrels, which is due to take effect in January, for a period of 3 months. And with a new wave of virus infections hitting the global economy, she believes that demand is still too fragile to absorb additional crude.

But delegates said the UAE has backed off.

Without public opposition to the delay, Emirati Energy Minister Suhail Al Mazrouei insisted on strict conditions – mainly the swift implementation of the cuts that other members owe to compensate for the infusion of so much in the previous months – that make the deal nearly impossible.

The Bloomberg report said this procedural dispute masked the UAE’s deep dissatisfaction with OPEC’s supply restrictions, which “do not bode well for collective cohesion in 2021,” according to Croft.

The size of the current cuts is 7 million 700 thousand barrels per day, which represents about 8% of global demand.

These were the details of the news OPEC Plus is silently working to mend the rift between Saudi... for this day. We hope that we have succeeded by giving you the full details and information. To follow all our news, you can subscribe to the alerts system or to one of our different systems to provide you with all that is new.