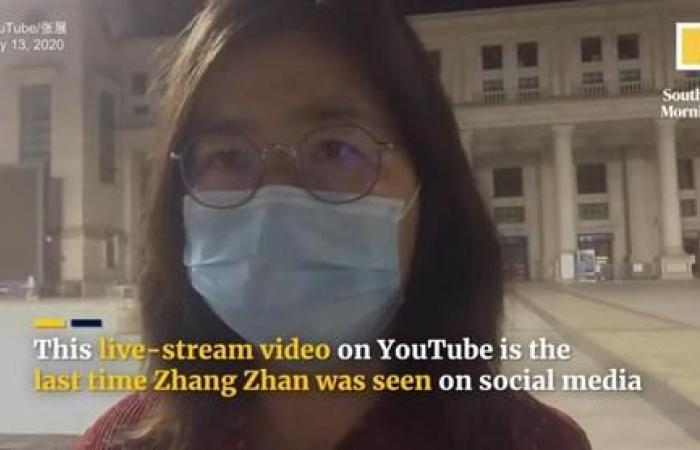 A citizen reporter who was arrested after reporting the local situation in Wuhan, China, the epicenter of the novel coronavirus infection (Corona 19), fought a hunger strike in a prison, but the authorities are known to have forced the supply of liquid food.

According to the Guardian and Amnesty International on the 10th (local time), the lawyer of Citizen Reporter Jang Jan, 37, visited him in a prison near Shanghai on the 8th, two days before, and confirmed that he had an abnormality in his body. This was announced through a blog. The lawyer said, “At the time of the visit, Jang Jan was wearing a thick pajama and a large belt was fastened around his waist. Also, the left hand was fixed in front of the body and the right hand was fixed behind the body.”

Jang-jan complained that he was suffering from inflammation of his mouth and throat along with headache, abdominal pain, and dizziness. This was because when Jang-jan fought for fasting, the correctional authorities forcibly supplied liquid food by inserting a tube. Both hands were fixed in front of and behind the body to prevent removal of the inserted tube.

Jang Jang began a hunger strike in September to claim innocence and protest detention. It is reported that the authorities disregarded their intention to continue fasting and inserted liquid food by inserting a tube up to the stomach, and for the past three months to live in shackles and handcuffs.

Jang Jang went to Wuhan in February to report on local issues such as harassment of the bereaved family of the Corona 19 dead and reported it online. For this reason, he was arrested on charges of public turmoil in May, and last month, “I spread false information through Internet media such as WeChat, Twitter, YouTube, and malicious analysis of the corona19 epidemic in Wuhan, and interviewed with foreign media such as Free Asian Broadcasting. He was formally prosecuted on charges and sentenced to 4-5 years in prison.

Zhang Zan denied the allegations of spreading false information, claiming to have obtained information by directly covering Wuhan residents. He was also detained last year and last year for voicing support for Hong Kong democratic activists. Jang Jan’s lawyer said, “Jang Jan expected that a trial will be held this month, but since the (court) has no plans to do so, the expectation has disappeared,” said Jang Jan’s attorney. “Jang Jan is worried about whether she can survive.”

Other citizen reporters who shared the situation in Wuhan also suffered. According to the Guardian, Chun Chus, a citizen reporter who was a lawyer like Jang Jan, was arrested in January, and a citizen reporter named Li Je-hwa went missing in February and then reappeared after being released in April. As a resident of Wuhan, Fangbin, who posted a video of how the hospital’s capacity has reached its limit, is still unknown after the news in February was cut off.

These were the details of the news In China, reporter Jang Jang hunger for hunger for’exposure of Wuhan’… for this day. We hope that we have succeeded by giving you the full details and information. To follow all our news, you can subscribe to the alerts system or to one of our different systems to provide you with all that is new.

PREV Drop in UK Covid-19 cases indicates infection surge may be past peak
NEXT Deadly heat wave slams Canada, US