Giscard d’Estaing buried in the strictest privacy of Authon 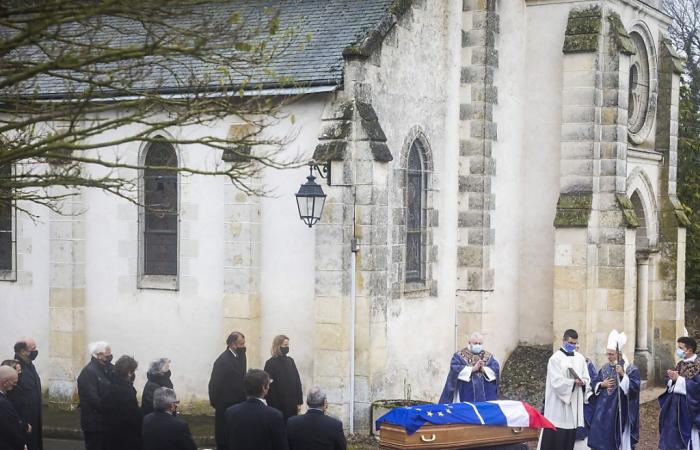 The funeral of Valéry Giscard d’Estaing took place on Saturday in the strictest privacy in the small village of Authon (Loir-et-Cher), noted an AFP journalist. The former President of the Republic died Wednesday at the age of 94 from Covid-19.

In the cold and humidity of a Saturday morning in December, the funeral convoy, accompanied by two vehicles of the gendarmerie, arrived at 10:30 am on the small square, between the town hall and the village church.

In a silence barely disturbed by the church bell and the clicking of cameras, the coffin covered by two flags, one French, the other European, at the request of the former president, was transported to the church.

About forty people, family and close circle, then attended the ceremony. A reduced gauge imposed by health measures but which corresponds to the former president’s ‘wish and will’ for privacy, as his son Henri Giscard d’Estaing confided on Friday.

Always according to the wish of ‘VGE’: the music was ‘part of the ceremony to accompany the flight of the soul’, it is specified on a document distributed Saturday on the spot to the press.

Three renowned musicians were brought together for the occasion: soprano Karine Deshayes with Roland Pidoux on cello and Alexandre Kantorow on piano. They performed six pieces, starting with Chopin’s sonata n ° 3, slow movement, and ending with Le Chant du Départ, ‘a piece he was very fond of’, the singer confided at the end of the ceremony.

The mass was celebrated by the bishop of Blois, Mgr Jean-Pierre Batut, and Mgr Jean-Michel Di Falco-Leandri, while the homily was delivered by Don Stéphane, of the parish of Montoire, it is specified in the document.

At the end of the ceremony, which lasted two hours, the funeral procession led by the clergymen crossed the village square for a hundred meters to reach the private vault of the Giscard d’Estaing family.

A man then went out into his garden to greet the procession. A dozen other people, kept away by security barriers, had made the trip to pay tribute to the former head of state.

On the plot next to the town hall, the family was then able to pay a final tribute before the coffin was brought to the ground. The former president was buried there next to his daughter Jacinte, who died in 2018.

The French will be able to come and meditate there from 9:00 a.m. on Sunday, said the mayor of Authon Marie-José Cintrat, the only elected official present at the ceremony.

During an address to the French on Thursday, Emmanuel Macron declared a day of national mourning on Wednesday in tribute to this ‘central figure in the history of our Republic’.

‘VGE’, who presided over France from 1974 to 1981, died Wednesday evening of the Covid-19, surrounded by his family on his property in Authon, a small village of Loir-et-Cher.

These were the details of the news Giscard d’Estaing buried in the strictest privacy of Authon for this day. We hope that we have succeeded by giving you the full details and information. To follow all our news, you can subscribe to the alerts system or to one of our different systems to provide you with all that is new.