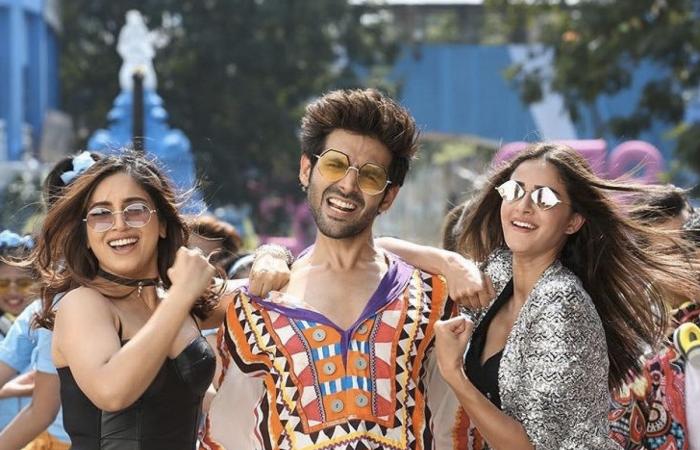 Three years into his marriage, Kanpur-based engineer Abhinav 'Chintu' Tyagi is so "bored" with life that he falls for the first pretty girl that comes knocking on his office door simply because she laughs at his jokes. That's the premise of this 'modern' take on the 1978 classic hit 'Pati Patni Aur Woh'.

If you were hoping for a bold retelling of the age old saga of infidelity, sorry, director Mudassar Aziz still seems stuck in the bubblegum era of marriage where an extra-marital affair can be forgiven if it doesn't turn "physical". At the centre of the story is the bumbling small town boy Chintu (Kartik Aaryan) who is married to a feisty, "emotionally high maintenance" physics lecturer Vedika (Bhumi Pednekar looking like a Yash Raj heroine in her chiffon saris and matching low cut blouses) whose only ambition in life is to move to the big city of Delhi.

So when a glamorous, stiletto wearing Tapasya Singh (a fresh-faced Ananya Panday) walks into his office, Chintu is ready for some fun. Except, his idea of fun is to take her on long drives and woo her by selling her the sob story of how his wife is having an affair. When Vedika finds out about her husband's charade, you'd expect sparks to fly. But the movie just delves deeper and deeper into 'comedy of errors' with all the characters running helter skelter to set things right.

If Aziz was trying at any point to impart a message about fidelity or marital vows, it is lost in the meandering script that jumps from Lucknow to Kanpur to Delhi. And the audience is taken along for a ride with some light moments for company.

While Vedika perhaps can be seen as making a point of sorts (again a very weak plot point), Tapasya who is strung along is the one who deserves a bit of sympathy. But unfortunately, we never connect emotionally with any of the characters. 'Pati Patni Aur Woh' in the end could have been a 'timepass' watch at least for fans of Kartik Aaryan, except his character is probably the weakest and comes off as a bumbling man-child.

Sunny Singh who makes a cameo as Vedika's ex boyfriend, Doga, is in fact more impactful and so is Kriti Sanon in a special appearance. Aparshakti Khurrana who plays the hero's sidekick, Fahim, stands out with some funny one-liners.

These were the details of the news Bollywood News - 'Pati Patni Aur Woh' is a marital comedy for this day. We hope that we have succeeded by giving you the full details and information. To follow all our news, you can subscribe to the alerts system or to one of our different systems to provide you with all that is new.