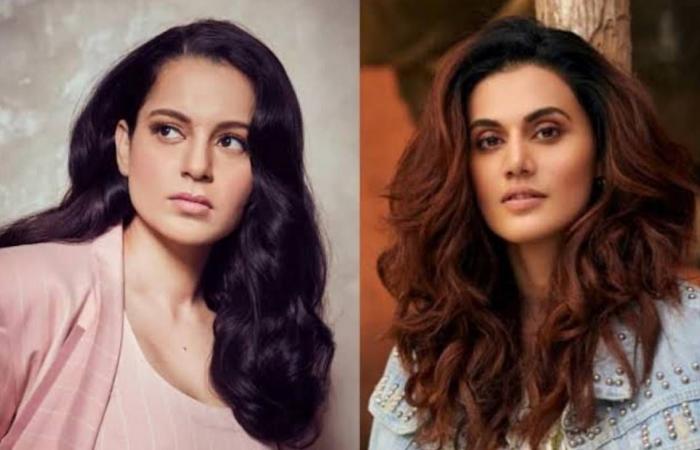 Thank you for reading the news about Taapsee-Kangana war of words: Kangana's team... and now with the details

The war of words between Kangana Ranaut and Taapsee Pannu is getting more intense, with neither party seeming to want to back down.

It all began with Kangana referring to Taapsee as a "B grade actress" in an interview with a television channel. Since then, several heated exchanges have taken place on Twitter, with the Pink actress frequently taking digs at the Manikarnika diva who seems to have embarked on a crusade of sorts to bring justice to Sushant Singh Rajput who she claims was a victim of nepotism and ill treatment in Bollywood. Just like her.

Yesterday, Taapsee had retweeted a tweet featuring two old videos, one which showcases Kangana praising Ranveer Singh for Gully Boy, with no mention of Sushant, while the other shows her bashing Gully Boy and singing Sushant's praises.

Of course, Kangana's team wouldn't take that lying down and retweeted another netizen's video that claimed what Taapsee had posted was edited (the original tweet featuring the videos is now unavailable).

"Ms Punnu (Pannu) (sic) has hit a new low by posting fake videos, today she has officially become not just a B grade actor but also a B grade human being, shame on you @taapsee for posting half edited videos to please your masters.."

They also went on to accuse her of not speaking up for Sushant Singh Rajput, writing, "Taapsee ji said she can't do drama for TRPs. It's a shame for a non existent career of hers she is trying to sabotage justice that whole nation wants for Sushant. For TRPs one needs valid points, brains, cohesive narrative and articulation..simply trying to humiliate struggle of a great woman like Kangana who not only put her glorious career at stake but even her own life in danger, shame on such greedy people."

Taapsee also separately posted a tweet from @YellowGlassDragon showing how Kangana in an interview, admitted she had never met Sushant.

With the unfortunate death of a talented actor like Sushant Singh Rajput being manipulated to further one's agenda, true fans and well wishers can only hope the focus will go back to where it should be - a fair investigation into his death which is free from any political or Bollywood interference.

These were the details of the news Bollywood News - Taapsee-Kangana war of words: Kangana's team... for this day. We hope that we have succeeded by giving you the full details and information. To follow all our news, you can subscribe to the alerts system or to one of our different systems to provide you with all that is new.