Five dead after running amok: Trier mourns – and puzzles over... 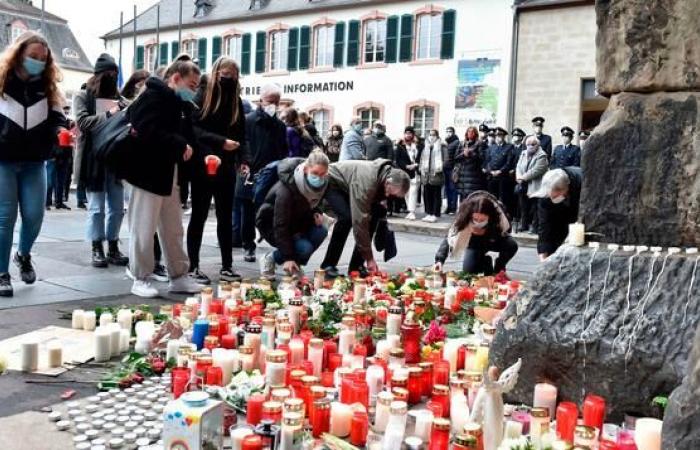 According to the Rhineland-Palatinate Interior Minister Roger Lewentz, it is difficult to prevent a rampage like in Trier city center. “If the car becomes a murder weapon, then it is difficult as a state to say that we can prevent that 100 percent. No, we cannot,” said the SPD politician on Wednesday in an interview on Deutschlandfunk. “How do you intend to prevent something when a person decides to get in the car and deliberately attack people.”

According to previous investigations, a man with a powerful off-road vehicle had targeted people in the pedestrian zone in Trier on Tuesday. Five people died, including a nine-week-old baby and his father. 14 people were injured.

The driver of the SUV was arrested. This is a 51-year-old German from Kordel in the Trier-Saarburg district. The murder vehicle was on loan; the owner is also a German. Security groups called the name Bernd Walter W. In the past few days he is said to have not been in his apartment, but in the vehicle, the police said.

The urgent suspect is to be brought before the judge on Wednesday. According to the prosecutor, there are indications of a possible mental illness in the 51-year-old. The man was drunk at the time of the crime, he was found to be 1.4 per thousand.

Mourning at the landmark of the city of Trier

According to Lewentz, no letter of confession from the gunman had been found. The investigation now depends on the interrogations and the suspect’s willingness to disclose his motives. At the moment, the investigators assumed that the gunman had acted without an organized background. There is also no further evidence of a political motive. According to the police, the man testified. “He’s talking to us,” said a police spokesman. However, initially no information can be given about the content.

In the meantime, the police in Trier have lifted the cordon off large areas of the city center. “The city is free again,” said a police spokesman. There will be further investigations, but barriers are no longer necessary.

No bollards because the Christmas market was canceled

Minister Lewentz said it would be difficult to cordon off a large city so that there was nowhere to attack people with a vehicle. “A pedestrian zone is only passable because there are, of course, many shops there that are constantly receiving delivery traffic.” These areas should also be open to emergency vehicles.

The Mayor of Trier Wolfram Leibe (SPD) said on Tuesday that bollards would have been set up at a Christmas market – but the market would not take place due to the corona. “Who is expecting such an act, who can completely secure an inner city on this scale?” The perpetrator might then have looked for another target. “There is no such thing as absolute certainty,” he said.

The prosecution classifies the act as multiple murder, attempted murder and dangerous bodily harm. There was no other crime scene or evidence of accomplices or accomplices of the arrested, it said. The man was drunk at the time of the crime, he was found to be 1.4 per thousand.

Arrested in Trier four minutes after the alarm

“This event shakes all of Germany,” said the Rhineland-Palatinate Interior Minister Roger Lewentz (SPD) on Tuesday evening in Trier. The perpetrator took targeted action and drove “zigzag lines” to inflict suffering. That happened to a very bad extent. “Four minutes after the first notice,” the man was arrested, said Chief Public Prosecutor Peter Fritzen. The driver is said to be “stopped and overwhelmed by forces of the police headquarters”.

In security circles it was said that there was no police information about Bernd Walter W. A disease like epilepsy is possible or diabetic shock. Insulin was found in the SUV. In Kordel it was learned that W. had only lived in town for a short time. He moved into an apartment in September 2019 and left it again in April 2020. Bernd Walter W. lived alone.

In addition to the baby, the victims include a 73-year-old woman, a 25-year-old, a 52-year-old woman and a 45-year-old man from Trier. According to the authorities, the baby’s mother is in hospital. The police informed about the death of the 52-year-old on Tuesday evening. Chancellor Angela Merkel expressed her concern in a statement.

The driver raced into the pedestrian zone around 1:54 p.m., said the spokesman for the Trier police headquarters, Uwe Konz, the Tagesspiegel. The first emergency call was received two minutes later. Colleagues in two police vehicles stopped the SUV. The arrested driver was not injured, but has not yet been questioned.

In a video of a local resident that is circulating on the Internet, plainclothes police officers hold the driver to the ground. A police vehicle hit the SUV from the left. In media reports it is said that the man resisted the arrest.

Driver left a trail of devastation

Eyewitnesses reported that people were thrown through the air. “We see such pictures on television quite often and think that cannot happen to us,” said Wolfram Leibe, Mayor of Trier. “Now it has also happened in Trier.” And further: “Everyone is busy bringing the injured and seriously injured to the hospitals at the moment,” said Leibe. He walked through the city center after the incident. “It was just awful,” he said, describing how he saw a child’s sneaker.

“What happened in Trier is shocking”

“The terrible images of the attack on the Berlin Christmas market come up,” a security expert told Tagesspiegel. Almost exactly four years ago, on December 19, 2016, the Islamist Anis Amri drove into the Christmas market on Breitscheidplatz in a hijacked truck. Twelve people died in the attack and more than 50 were injured.

The Rhineland-Palatinate CDU politicians Julia Klöckner and Christian Baldauf expressed their shock and concern. They were shocked by the “amok run”, said the CDU state chief and the CDU state parliamentary group leader. “Our thoughts are with the injured on site. We mourn with the relatives of the dead,” they said.

“What happened in Trier is shocking,” said government spokesman Steffen Seibert on Twitter. “The thoughts are with the relatives of the victims, with the numerous injured and with everyone who is currently on duty to care for those affected.”

In February, a 29-year-old German deliberately drove his car into the crowd in Volkmarsen, northern Hesse. Dozens of people were injured. In 2019, a 50-year-old had hit people on New Year’s Eve in Bottrop. He was admitted to the closed psychiatry. In 2018, a man raced into a group with his camper in Münster, and five people died. The perpetrator shot himself, the investigators assume a mental illness. (with dpa)

These were the details of the news Five dead after running amok: Trier mourns – and puzzles over... for this day. We hope that we have succeeded by giving you the full details and information. To follow all our news, you can subscribe to the alerts system or to one of our different systems to provide you with all that is new.

PREV UAE: A model for women’s rights in the Middle East?
NEXT Youth join mainstream as India unveils development initiatives in Jammu and Kashmir