Alibaba spends five times as much on subsidies to export Singles... 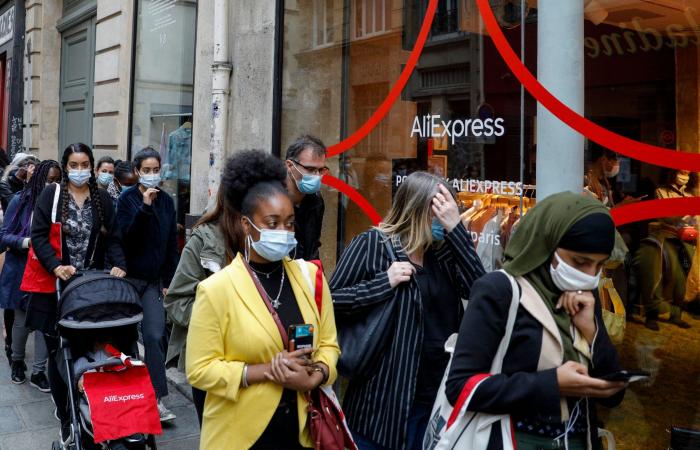 People are queuing outside the AliExpress pop-up store in Paris on September 24, 2020.

Similar to Black Friday or Cyber ​​Monday in the US, the shopping event started on November 11th as the day of bulk discounts on Alibaba’s online shopping platforms. The promotional period has since lengthened to at least November 1-11, while other Chinese e-commerce companies like JD.com have been building up.

That year, JD saw transaction volume grow 32.8% to 271.5 billion yuan ($ 40.4 billion) as of 2019. This is faster than the 26% increase reported by Alibaba, albeit by a far higher gross merchandise volume of $ 498.2 billion ($ 74.1 billion) (GMV). GMV is a metric most commonly used in e-commerce that measures the total dollar value of goods that have been sold over a period of time.

For Alibaba, it states that the GMV number is the total value of orders and shipping costs billed through the Alipay digital payment system for transactions such as those in the company’s Chinese retail markets and international e-commerce platforms Lazada and AliExpress.

AliExpress generally connects Chinese sellers with overseas buyers so that overseas businesses and consumers can buy directly from factories in China. While removing middlemen can make purchasing products significantly cheaper, sheer distance and an underdeveloped logistics network can mean weeks of delivery times.

In order to speed up delivery and reduce costs for customers, AliExpress has increased subsidies for logistics operations on Singles Day by five times compared to last year, Li Dawei, head of AliExpress supply chain, told CNBC in a phone interview this week . The business unit works with Alibaba’s logistics department Cainiao and local delivery companies in other countries.

According to Li, the company launched around 100 cargo charter flights to Europe on Singles Day during the roughly two-week shopping period. That’s roughly seven flights a day, out of two off-peak hours.

Outside of the shopping festival, investments in logistics have reduced delivery times to Spain and France for some cross-border products by around 30% to 10 working days, according to AliExpress. The company is also expanding its warehouse system in Europe, which enables retailers to store goods in advance and deliver selected products to Spain, France and Poland within three days and to other parts of Europe in five to seven days.

It’s not clear how much AliExpress contributed to Alibaba’s Singles Day sales this year. The division announced that sales of goods sold in overseas warehouses in the first minute of November 11th matched that of the first 60 minutes of last year.

The opportunities and competition in e-commerce are increasing as the stay-home guidelines enacted after the coronavirus pandemic accelerate the demand for online shopping worldwide.

Amazon reported a 37% increase in net sales to $ 96.1 billion for the third quarter that ended September 30. The company has been scrutinized by European regulators regarding data usage, which may give Amazon an unfair advantage over other sellers.

AliExpress has been trying to get local sellers to join its platform, starting with Russia, Spain, Italy and Turkey early last year, the company said. The platform offers the same live streaming sales tools that have become increasingly popular in China and has launched real-time translation for some languages.

Whether these efforts to replicate the success in China’s e-commerce market will work in Europe remains to be seen.

An overlooked factor in the rapid growth of the online shopping ecosystem in China is the development of the digital infrastructure there, according to Felix Poh, partner at McKinsey.

Heavy subsidies are common in China’s internet industry, where survival often depends on a start-up’s ability to quickly attract and retain a large group of users. The strategy is to capture a large base that can then be monetized.

Alibaba shares are down more than 10% in the past five days of trading, while JD’s have fallen more than 7% after the state administration for market regulation (SAMR) released draft guidelines against internet industry practices that create monopolies.

“The draft mentions that the use of subsidies, rebates and traffic support through platforms, despite consumer preference, may affect fair competition among market participants (ie by keeping prices below cost),” said Morgan Stanley analysts in a report on Wednesday. “This could have an impact on Alibaba’s advertising efforts. To what extent such subsidies are viewed as a violation of the antitrust regulations remains uncertain. ”

Overall, the analysts expect that the regulatory controls will have fewer effects than in previous years due to the existing competition. Morgan Stanley estimates Alibaba’s GMV will fall to 59% of the Chinese market this year, down from 76% – or more than three quarters – six years ago when it first went public.

In fact, the company’s latest quarterly report found the number of monthly active users on mobile devices increased by 7 million from June to September. This is the smallest increase recorded according to an analysis by Chinese tech news site 36kr and confirmed by CNBC.

The total of 881 million is well over 90% of the 932 million mobile Internet users reported by the government agency China Internet Network Information Center in June.

While overseas Chinese players are experiencing significant growth, overseas companies often lack staff with sufficient overseas experience and face many other challenges such as capital and regulation, said Charles Guowen Wang, director of the think tank China Development Institute . He noted that the opportunities in China are still quite good.

Alibaba remains a giant in China, but rival Tencent is gaining ground.

More and more people are also using the popular WeChat messaging tool to shop via in-app mini-programs, which now have more than 400 million active users per day, as Tencent’s own app announced in September. From January through August, the GMV value for physical products purchased through mini-programs more than doubled year over year.

“I think we’ve also seen the rise of the direct-to-consumer program, which is also the WeChat mini-program,” Poh said. “In terms of scope and relevance, it has grown exponentially over the past 18 months.”

These were the details of the news Alibaba spends five times as much on subsidies to export Singles... for this day. We hope that we have succeeded by giving you the full details and information. To follow all our news, you can subscribe to the alerts system or to one of our different systems to provide you with all that is new.