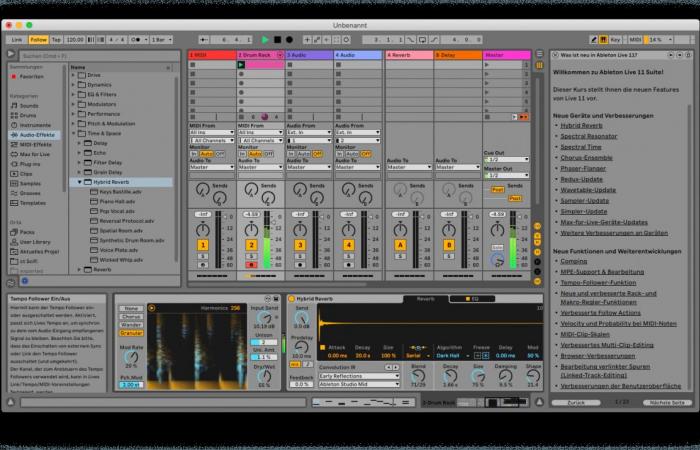 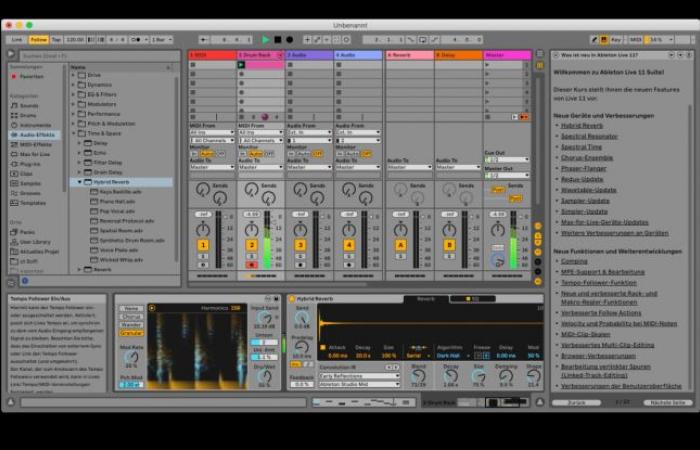 If electronic musicians wanted to play together with real drummers, the latter usually had to follow the strict tempo guidelines of a sequencer. Live performances lost a lot of their spontaneity as a result. Ableton Live 11 aims to simplify the interaction between man and machine. The just announced new version of the music software brings with it a follow function. This listens to a microphone signal from the drummer at the audio input and adapts the tempo of the sequencer to the drummer.

In addition, Live 11 brings a whole bouquet of new functions. Patterns of the internal drum sequencer can now be varied more easily by specifying probabilities and loudness variations for individual hits.

In the future, the software will also process MPE commands from keyboard controllers, which allow playing with a wealth of nuances. The suite’s internal sampler and wavetable synthesizer implement these. The Push-2 controller will also output its aftertouch polyphonically in the future. When you press a struck chord, you can control each note individually. The new MIDI 2.0 standard is not supported, however.

In other functions, Ableton Live is finally catching up with other digital audio workstations. So several takes of a vocal track can finally be selected and merged via comping.

The suite version in particular benefits from the new instruments and effects. The new Hybrid Reverb stands out: The combination of convolutional and parametric reverb combines the sound quality of impulse responses of real rooms with the flexibility of parametric reverb plug-ins. Experimental musicians are excited about six new software instruments that were inspired by natural phenomena.

Otherwise Ableton has screwed on many details. In order to keep an eye on the processor load and to identify resource-hungry plug-ins, Live 11 shows the CPU loads of each individual track. The number of macro controllers in racks has been increased from 8 to 16. The bottleneck of a maximum of 12 send / return tracks, however, has not been eliminated. You can find an overview of all new features on the Ableton website.

The system requirements have increased. If the 10 version ran with 4 GB of RAM, at least 8 GB will be required in the future. Windows 7 and macOS computers up to 10.12 are excluded. Live 11 requires at least Windows 10 or macOS 10.13. For the latter, the specifications only list Intel processors. Apple’s M1 processors are not supported natively, the manufacturer announced when asked by c’t.

Ableton has already entered the closed beta phase of Live 11. The prices of the Intro, Standard and Suite versions for Windows and macOS remain unchanged at 77, 340 and 583 euros. Ableton is granting a 20 percent discount until the final 11 version goes on sale in the first quarter of 2021. Anyone who buys the 10 version by then will get version 11 free of charge. Previous owners of Suite 10 would otherwise pay around 150 euros for the 11 upgrade, for example.

*The article has been translated based on the content of Source link by https://www.heise.de/newsticker/meldung/Musiksoftware-Ableton-Live-11-verbindet-Elektro-Beats-mit-realen-Schlagzeugern-4953791.html
. If there is any problem regarding the content, copyright, please leave a report below the article. We will try to process as quickly as possible to protect the rights of the author. Thank you very much!

These were the details of the news Music software Ableton Live 11 combines electro beats with real drummers for this day. We hope that we have succeeded by giving you the full details and information. To follow all our news, you can subscribe to the alerts system or to one of our different systems to provide you with all that is new.