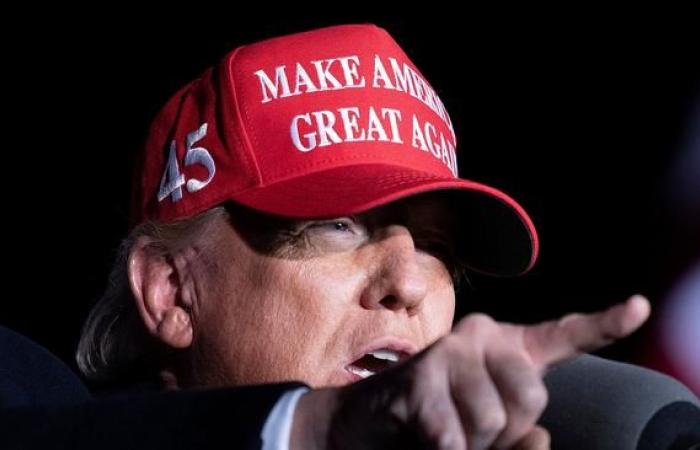 Joe Biden called for unity in his victory speech on Saturday night and urged the Americans to reach across the aisle and no longer see themselves as “enemies”.

“But now we’re giving each other a chance. It’s time to get rid of the harsh rhetoric and bring the temperature down. And to move forward, we must stop treating our adversaries as our enemies. They are not our enemies. You are American. ”

However, many supporters of the president-elect did not receive the memo.

Prominent Democrats and media personalities are now openly discussing retaliation against their political opponents and making “lists” of everyone who has supported President Donald Trump.

“We should keep and publish a list of everyone who helps Trump’s frivolous and dangerous attacks on the elections,” tweeted failed presidential candidate Evan McMullin. “Name and shame forever.”

Washington Post Blogger Jennifer Rubin commented, “Any R now advocating the rejection of an election, or calling for non-voting or unfounded fraud allegations, should never be in office, join a company board, find a faculty position, or be politely accepted become ‘society. We have a list. ”

New York Congresswoman Alexandria Ocasio-Cortez tweeted, “Is anyone archiving these Trump sycophants if they try to downplay or deny their complicity in the future? I see a good chance of a lot of deleted tweets, fonts and photos in the future. ”

In response, several Democrats stepped in to promote their Trump Accountability Project, which seeks to create a “permanent record” of everyone “who pushed the Trump agenda.”

Former Obama spokesman Hari Sevugan also replied to Ms. Ocasio-Cortez. “You better believe it,” he wrote. “We just started the Trump Accountability Project to ensure that anyone who took a paycheck to help Trump undermine America is held responsible for what he did.”

In a follow-up tweet, Mr. Sevugan threatened that any company that employed someone on his list would also have “consequences”.

“(CNN) just reported that White House staff are starting to look for jobs,” he wrote. “Employers who consider them should know that there are hiring ramifications for those who helped Trump attack American values. Find out how the Trump Accountability Project is doing. ”

Emily Abrams, a former campaign worker for failed presidential candidate Pete Buttgieg, wrote, “We’re starting the Trump Accountability Project to ensure that anyone who took a paycheck (sic) to help Trump undermine America is for that is held responsible for what he did. Get involved and help spread the word. ”

A Google spreadsheet shared online allegedly “the start of this effort” naming Ivanka Trump and her husband Jared Kushner also has an “Appointed” tab that lists more than 50 seated judges, including the judges of the Supreme Court Amy Coney Barrett and Brett Kavanaugh and Neil Gorsuch.

Controversial anti-Trump lobby group The Lincoln Project incriminated the action and released the photos and contact details of two of the lawyers involved in the Trump campaign in Pennsylvania. “Make them famous,” the group wrote in a post that has since been removed from Twitter for violating the rules.

Steve Schmidt, co-founder of the Lincoln Project, had previously tweeted that Mr. Biden had been “elected president” and that “American democracy is under attack by the defeated president.” “He doesn’t act alone,” he said.

“He is supported in his attack by his White House and campaign workers. He is also supported by several law firms. All of these people are involved in the attack on American democracy. None of them should ever be forgiven. They should all pay a brutal price for betraying the American ideal. ”

CNN political scientist Joe Lockhart wrote, “This is not meant to be mean or vengeful. But the people around Donald Trump who enabled him to marginalize our democracy must be held responsible for what they did. They cannot be rewarded for what they did. ”

The author Don Winslow wrote in a post that has since been deleted: “Here is my New Years resolution 2021: Nobody gets out, which has helped Trump. Nobody.”

New York Times Columnist Wajahat Ali said, “You cannot heal or reform the GOP, which is now an extremist party. They have to be broken, burned down and rebuilt. When Biden is in power, treat them like the active threat to democracy that they are. If those who have committed crimes are not punished, they will be more encouraged. ”

Many, including former Clinton Secretary of Labor Robert Reich, have called for a “commission” to prosecute former Trump administration officials.

“When this nightmare is over, we need a truth and reconciliation commission,” he tweeted. “It would erase Trump’s lies, comfort those harmed by his hatred, and name every politician, manager and media mogul whose greed and cowardice made this disaster possible.”

Celebrity MSNBC host Chris Hayes had the same idea. “The most humane and sensible way to deal with all of these people, if we survive this, is through some kind of truth and reconciliation commission,” he said.

Hollywood stars weighed in too. “Again, a Truth and Reconciliation Commission would be very useful here,” wrote actress Quinn Cummings. “Russia is at war with us and (a) cohort of Americans believe this is not true because their skin is white.”

Others suggested avoiding Trump supporters, not just those who worked directly with the administration.

“I will not empathize with Trump supporters, support him, forgive him, understand him, make amends and reconcile him with him,” tweeted Preston Mitchum, the organizer of the Washington DC community. “Not a single one. He was a proud white nationalist who proudly raised many white supremacists. That supported him. And I’m not apologizing for saying that. ”

New York Daily News Columnist and former Obama administration official Brandon Friedman said, “Whether Trump supporters are hostile or misled does not matter to victims of gun violence, an uncontrolled pandemic and heartless immigration policies – all of these are choices. We should reach * these * families long before we try to make up for deplorable things. ”

With Biden having been declared the winner (for now) by major media outlets, I figured it would be a good time to share some of the people who’ve threatened retribution against Trump supporters.

The calls for retaliation say, “Nothing says” healthy democracy “as good as” Now that we’ve won, who has the list of our enemies on hand? ”

“We are not a post-genocide society,” he wrote.

“The suggestion that we need a Rwandan-style Truth and Reconciliation Commission is absurd. And free societies do not develop political hit lists. This left-wing champagne fascism must stop. Now would be a good time. ”

These were the details of the news Biden supporters create a revelation list of Donald Trump’s allies for this day. We hope that we have succeeded by giving you the full details and information. To follow all our news, you can subscribe to the alerts system or to one of our different systems to provide you with all that is new.