“Stop the count”: postal voting, a catalyst for false information 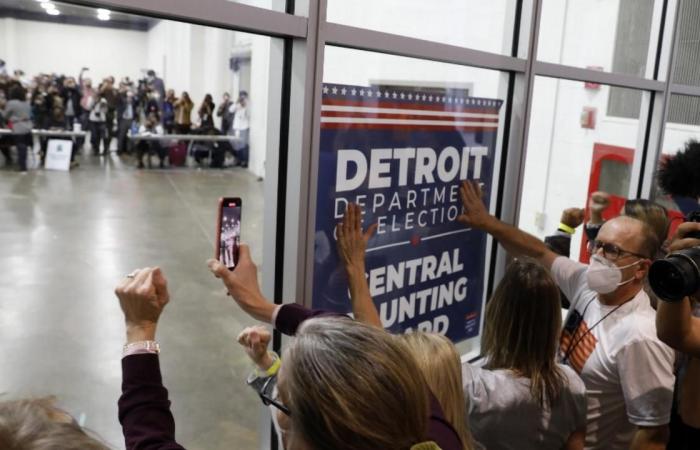 FAKE NEWS – With millions of Americans voting by mail amid the pandemic, polling stations are swamped with polls. So much so that they continued to loot during the night from Tuesday to Wednesday, angering Donald Trump and his supporters who shout about electoral “fraud”.

A neck-and-neck race, a count that goes on forever, and a presidential election where every voice wants to be heard. All the elements were in place to make this American election day a fertile ground for disinformation. On this morning of Wednesday November 4 in the United States – that is to say the afternoon in France – many Internet users woke up surprised by the “comeback“by Democratic candidate Joe Biden. A sudden increase which can be explained by the number of votes cast by mail, a particularly explosive subject during this election.

Donald Trump indeed spent a good part of his electoral campaign to firmly oppose this device which was going to favor “unbridled and uncontrolled cheating“. So, when he saw that in several states, these votes were starting to harm him, he grabbed his phone. https://twitter.com/realDonaldTrump/status/1324032541544927233?s=20 against this election “bad for the country“under the pretext that we found”Biden votes everywhere – in Pennsylvania, Wisconsin and MichiganThis Thursday again, he wrote in block letters on Twitter: “Stop counting!”

In fact, there are two reasons why ballots continue to be counted in these states. On the one hand, because this device was acclaimed by Americans because of the health crisis. On the other hand, because these three states did not have the right to start the counting before polling day. They were therefore overwhelmed by the deluge of letters to take into account. An anomaly which is now at the heart of all fantasies. So that the slightest deviation is perceived as a fraud. Some Internet users were thus surprised by the alleged pro-Biden bulletins found “as if by magic“in Michigan on the night of Tuesday to Wednesday. An accusation based on a tweet, now deleted, widely circulated, https://twitter.com/realDonaldTrump/status/1324012341458075648?

The screenshots show a board from Decision Desk HQ, a private electoral analysis institute. As the results poured in from Michigan in the early morning hours, 128,000 votes were added. All in favor of Joe Biden. Unanimity impossible in a democracy. In fact, this is indeed an error during data entry. According to the spokesperson for this company, it only lasted a few moments. The error, then its correction, are indeed perfectly visible in the tweets of this polling institute. In

Ditto in Wisconsin, where nearly five times as many postal ballots were cast compared to the 2016 ballot. An influx that complicated the delivery of votes and delayed the count. While the electoral process was still ongoing, several internet users claimed that the state “had found“votes to favor Joe Biden. A graphic, gone viral, illustrates the sudden rise of the Democratic candidate. This time, it is not a question of a typing error but of a misunderstanding of the American electoral system.

The one who explains it best is the American media that produced the graphics used by this activist, namely fivethirtyeight. This Wednesday morning, the site specializing in “data journalism” noted that this improbable rise “happened when 170,000 mail-order votes from the city of Milwaukee poured in at the same time “. This county, the most populous in Wisconsin, has in fact eight of these 19 municipalities which have decided to centralize the postal ballots in one place before publishing them. So it was not until the next morning that the clerk was able to update the figures. It was then that, as a local headline noted, Joe Biden overtook Donald Trump.

We cannot find any ballots, the ballots are counted– Julietta Henry, Election Officer for Milwaukee County

No wonder, then, that new votes “appear“On the contrary. As early as November 2, the day before the ballot, electoral officials in Wisconsin had also alerted the public to this possibility. Already at the time, they warned that this”won’t mean something went wrong, it will mean election officials are doing their job. “

But despite all these arguments, Donald Trump persists and signs. For him, something is happening “strange“. He observes that while he was given”winner in many key states“, are advance to”magically disappeared as the surprise ballots were counted“. It is true that if the candidate for his succession had taken the lead in some states, it was filled, even it evaporated as the night wore on. This is the case in Wisconsin and Michigan, cited above. But the reverse is just as notable. This is what the New York Times, which followed the count all night. And concluded that at least three states had colored blue in the early evening before switching to the red side: Georgia, Kentucky and South Carolina. Arizona even changed colors three times.

If the trends have evolved in both directions, only one camp finds fault. And calls for “to cease“to count the votes. An ubiquitous situation but which could be anticipated. Like Senator Bernie Sanders. In an interview that went viral, he was worried on October 23 that”on election night, Donald Trump wins and goes on television to proclaim his victory“. But once the postal votes are taken into account,”It turns out that it’s Joe Biden who wins in several states“. For him, “confusion will be strong in states like Pennsylvania, Michigan, Wisconsin“. During this “

Bernie’s prediction on the election is spot on so far. 🤯 pic.twitter.com/nMtwlqTd4S

, “the former Democratic primary candidate worried that the Republican candidate would then say:”You see ? I told you that everything was fraudulent, that these postal votes were dishonest. We will not cede the Presidency! “ If his first prophecy came true, it remains to be seen what will happen to the second.

Do you want to react to this article, ask us questions or submit information that does not seem reliable to you? Do not hesitate to write to us at [email protected]

LIVE – “Let’s keep calm”: sure of his victory, Joe Biden calls on his supporters to be patient

Closure of “non-essential” departments: supermarkets have already found the solution

Joe Biden, the man of records at the gates of the White House

These were the details of the news “Stop the count”: postal voting, a catalyst for false information for this day. We hope that we have succeeded by giving you the full details and information. To follow all our news, you can subscribe to the alerts system or to one of our different systems to provide you with all that is new.