American election: Pennsylvania, Georgia, Nevada … follow the vote in the... 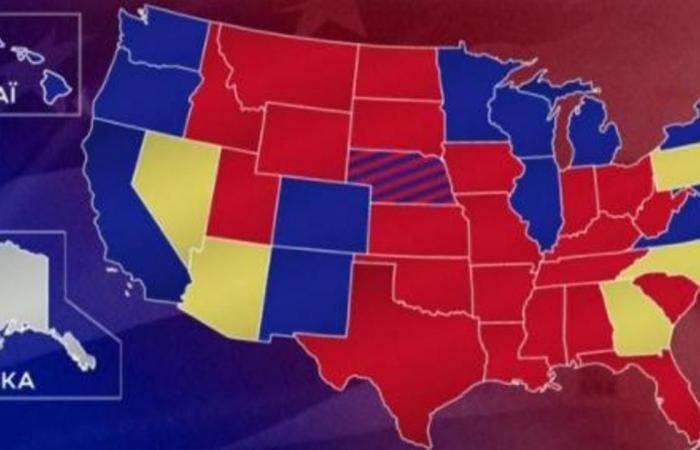 SWING STATES – The final result might not be known for several hours or even days as the outcome of the vote looks tight in the last key states. We take stock of the results.

Georgia, North Carolina, and Pennsylvania. It is in these key states that the US election is currently being played out. Not to mention Arizona and Nevada, with the outcome still uncertain, or Alaska, with results not yet formalized but acquired by Donald Trump. The two candidates have so far split six swing states, these States which can switch to one camp as to the other. Ohio, Florida, Texas and Iowa were all won by Donald Trump. Joe Biden has won Michigan and Wisconsin.

In 2016, the billionaire had won in six swing states and had been invested despite his loss for the popular vote – Hillary Clinton surpassing him by 2.8 million votes. To win, the candidates must indeed win the vote of 270 of the 538 voters, attributed to the States according to their demographic weight. In the State, the projections given by the ABC channel are still too uncertain to ensure a victory for one or the other candidate.

It is one of the first key states where polling stations closed, at 7 p.m. local time. Georgia offers the victorious candidate 16 major voters. In 2016, she crowned Donald Trump. According to partial results, based on 96% of the ballots counted, and given by ABC News, Donald Trump’s advance is melting like snow in the sun. At the head of 100,000 votes at nightfall (in France), he only has 18,000, Thursday, November 5 at the end of the morning.

To win, Joe Biden relies in particular on the votes of the African-American community (32% of the population of the state), an electorate whose interests Donald Trump also claimed to defend in his program. Tens of thousands of ballots from the city of Atlanta, a Democratic stronghold, have yet to be counted.

In this state which has 15 major voters, the latest polls announced a close fight between the two candidates: 48.9% for Joe Biden, 47.1% for Donald Trump. On the one hand, the evangelical community and a white and rural population could influence the Republican camp. On the other hand, the former vice-president is counting on African-American votes and those of urban youth.

According to the partial results, based on 95% of the ballots counted, Donald Trump is in the lead with 77,000 votes ahead of Joe Biden.

Pennsylvania: the most uncertain state

The state, traditionally democratic, has 20 leading voters. By tilting the territory a short head in the Republican camp, Donald Trump marked one of the turning points of the election of 2016. Joe Biden, born in Scranton, was at the head of the polls on November 2: 50, 2%, five points above the incumbent president. “We are going to win Pennsylvania”, said the Democratic candidate, this Wednesday at 6:30 am French time.

“We’re going to win Pennsylvania with a very high margin”, had Donald Trump in a speech delivered two hours later. “We have over 690,000 (voice) margin, it is not even tight. With 64% of the votes already counted, it will be practically impossible to catch up with us. “ Before announcing an appeal to the Supreme Court. “We want to stop the vote, we don’t want them to find ballots at 4 a.m. and try to add them.”

If Donald Trump’s advance was real, the rise of Joe Biden, which finds its explanation in the overrepresentation of Democrats among the correspondence ballots (counted last), is also true: of 690,000, the advance is more than 164,000 votes, while 89% of the ballots were counted. So much so that the presidential clan asked to suspend the accounts.

Arizona was a challenge for the Democratic camp, which failed to win after 1996. The stake: 11 leading voters. The advantage in the polls of the former vice-president has narrowed over the weeks to settle, just before the poll, at 48.7% of voting intentions, against 46.1% for his rival.

According to the results at 86% of the count, Joe Biden comes out on top with 69,000 votes ahead of his Republican opponent, three points ahead.

Nevada: Biden in the lead

Wednesday evening, 86% of the votes had been counted in this desert state of the West – 6 major voters at stake – which had chosen Hillary Clinton in 2016. Joe Biden is currently in the lead, with 49, 3%, against 48.7% for Donald Trump, with 7,000 votes in advance. The end result, which could open the doors of the White House for good to Joe Biden, should not be known until Thursday morning, however. We are waiting in particular for the end of the ballots in Las Vegas, another Democratic stronghold.

According to the available results, Ohio is retained by Donald Trump with more than 53% of the vote (against 45 for Joe Biden), he who had already largely won in 2016. He thus won 18 additional voters.

The election in Ohio generally serves as a premise of the final result, as the demographic composition of this state is so diverse. In 2016, it was the abstention of the Democrats, in particular, that allowed Donald Trump to triumph with an eight point lead. It is also here that the polls gave, on the eve of the 2020 election, one of the smallest gaps between the two candidates: 47.5% for Trump, 46.8% for Biden. A small difference very largely denied by the results.

A historically Democratic state that became Republican in 2016, Michigan has 16 elected voters. The old industrial basin, hard hit by the 2008 crisis, hoped for an economic revival. Have its inhabitants been disappointed by Donald Trump? Still, they have chosen to place their trust in Joe Biden, who wins with just over 60,000 votes ahead of his opponent.

With 29 major voters, the “Sunshine State” was one of the main issues of election night. And events have turned in favor of the outgoing president. Even if the results show a very disputed ballot (less than 400.00 votes difference), Donald Trump wins Florida with 51% of the votes, against 48% for Joe Biden.

The 2016 scenario repeats itself, when the Republican candidate narrowly won it thanks to the senior vote. A community whose vote probably mattered a lot: Cuban-born voters, traditionally attached to the Republican Party, and even more so after the Trump administration’s sternness toward the Castro regime.

It was the state not to lose for Donald Trump. The Republican stronghold – in every presidential election since 1980 – has no less than 38 electors. And the outgoing president has not failed. Donald Trump wins Texas, with 52% for the vote, against 46% for Joe Biden, behind nearly 700,000 votes.

Joe Biden was however expected there: the demographic upheavals of the state, the growing place of the Hispanic community in particular, could presage a victory. In the polls, the gap was extremely small: 48.8% on the Republican side, 47.4% on the Democratic camp.

Outgoing President Donald Trump won Iowa with 53% of the vote (45 for Biden). A sparsely populated agricultural state, this territory has 6 major voters. After two votes in favor of Barack Obama in 2008 and 2012, the state offered Donald Trump a large victory in 2016.

Once the results of each state are known – a wait which, because of the importance this year of the early vote, could be prolonged -, it will remain with the large voters to vote to designate the future American president. It will be December 14, two months before the official investiture.

These were the details of the news American election: Pennsylvania, Georgia, Nevada … follow the vote in the... for this day. We hope that we have succeeded by giving you the full details and information. To follow all our news, you can subscribe to the alerts system or to one of our different systems to provide you with all that is new.