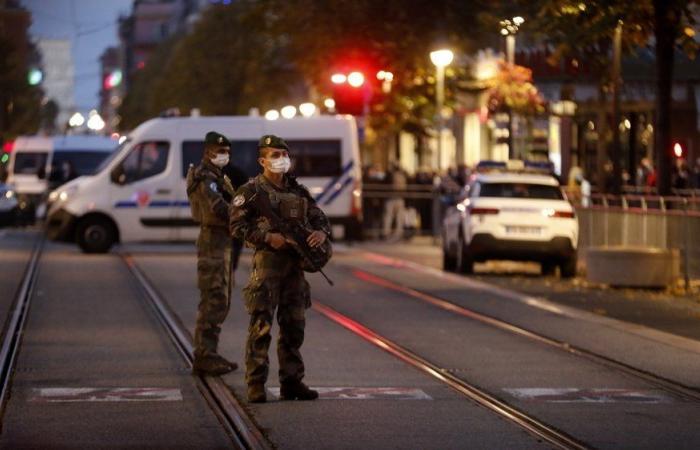 A 29-year-old Tunisian, heard in the investigation into the fatal knife attack on the basilica in Nice, is suspected of having made the migratory journey with the assailant, we learned from corroborating sources. Three police custody were lifted on Sunday.

This Tunisian national, arrested on Saturday afternoon in Grasse (Alpes-Maritimes), “is suspected of having rubbed shoulders with the author during his migratory journey,” a source close to the matter told AFP. He “surely” arrived in France recently, she added. On Sunday, he was still in police custody with two men, 25 and 63, present at his home.

The three men arrested Thursday and Friday in Nice were for their part released without any charge against them, said a judicial source. Two of them, aged 47 and 35, had been arrested for having been in contact with the Tunisian assailant, Brahim Issaoui, the day before the events.

“They mentioned a chance meeting with the person they did not know and harmless exchanges. The investigation confirmed their statements “and revealed neither radicalization, nor possible participation of the two men in the facts, specified the source close to the file.

The cousin of the second Niçois, also released, had been arrested because he was in the latter’s accommodation at the time of a police search.

“Came there to kill”

Regarding the assailant, Brahim Issaoui, Interior Minister Gérald Darmanin said in an interview with the Voix du Nord newspaper published on Sunday that he “obviously came there to kill. How else to explain why he armed himself with several knives barely arrived ”.

“Of course, it is up to the counterterrorism prosecutor to define when his murderous plan was constructed. But he obviously did not come to obtain papers, ”he added.

Brahim Issaoui, 21, who had a criminal record of common law – violence and drugs – had left the city of Sfax, in central Tunisia, in mid-September, where he lived with his family. Arrived illegally in Europe by the Italian island of Lampedusa on September 20, he would have landed on the continent, in Bari, in southern Italy, on October 9.

The investigation was able to determine that he arrived in Nice on Tuesday. He was spotted by CCTV cameras near the basilica the day before the incident.

Thursday, at 8:29 a.m., the assailant entered the Notre-Dame-de-l’Assomption basilica, in the city center, where he slaughtered a 60-year-old woman, Nadine Devillers, and the sacristan, Vincent Loquès, aged 55 years old. A 44-year-old Brazilian mother Simone Barreto Silva, stabbed several times, died in a nearby restaurant where she had taken refuge.

Seriously wounded by bullets by a municipal police patrol, he could not be heard. The investigators are counting in particular on the use of the two cell phones found in his belongings and the investigations carried out in Tunisia to retrace his journey, find out the reason for his trip and determine whether he has benefited from complicity.

Tunisian head of government Hichem Mechichi on Saturday called on his interior and justice ministers to fully cooperate with the French authorities in the investigation opened by the national anti-terrorism prosecution.

Under high security, the Catholics of Nice gathered on Sunday for All Saints’ Day with a special prayer for the three victims.

In Toulouse, imams and their families took part in a mass in a church in a working-class neighborhood: “These people without mind or reason want to make another interpretation (of the Koran). We firmly reject it, ”said one of the imams of the Al-Rahma mosque, Lahouary Siali, alongside the parish priest of the Church of the Holy Spirit in Bagatelle.

All Saints’ Day, among the main Catholic holidays, celebrates known or unknown saints every November 1. The next day, prayers are addressed to the deceased who are visited in the cemetery. Despite the spread of Covid-19 which led to the re-containment of the French, the cults obtained an exemption until Monday inclusive, after which masses with the public will be suspended.

These were the details of the news three men released, a Tunisian … for this day. We hope that we have succeeded by giving you the full details and information. To follow all our news, you can subscribe to the alerts system or to one of our different systems to provide you with all that is new.