The opening of the Algiers Mosque, the third largest mosque in... 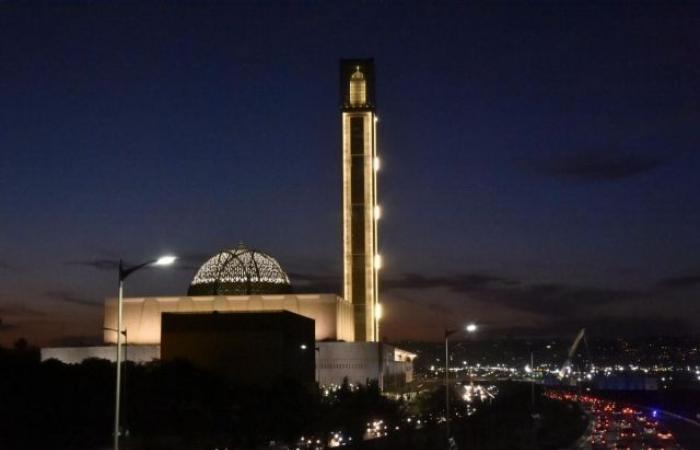 On Wednesday evening, the first mass prayer will be held for the opening of the Great Mosque of Algiers on the occasion of the celebration of the Prophet’s birthday, and this is the third largest mosque in the world in terms of area after the Prophet’s Mosque in Medina and the Grand Mosque in Mecca, and the largest in Africa.

The Algiers Mosque extends over an area of ​​27.75 hectares. As for its minaret, it is the highest in the world, as it is 267 meters, or 43 floors, and can be accessed by elevators and provides panoramic views of the Algerian capital.

On Wednesday evening, the mosque’s prayer hall will open, which can accommodate 120,000 worshipers.

The interior of the mosque is decorated with Andalusian character, with no less than six kilometers of calligraphy panels on marble, alabaster and wood. As for the carpets, they are blue-turquoise with floral motifs, according to a traditional Algerian character.

The Algeria Mosque, in addition to the prayer hall, includes 12 buildings, including a library containing one million books, a lecture hall, a museum of Islamic art and history, and a center for research on the history of Algeria.

The performance of the prayers is supervised by five imams and five muezzins, as explained by a member of the Association of Muslim Scholars, Kamal Chakat, who considered that the mission of this edifice would be “to organize and coordinate fatwas with the lived Algerian reality.”

“The idea is for the Algiers Mosque to become a place where all forms of extremism, religious or secular, are fought,” said Shikat, a professor of Sharia.

He continued, “There are really serious people who are aware of the current problems: extremism and the outdated vision of religion that is being presented in our countries as well as in the West.”

This huge project, wanted by former President Abdelaziz Bouteflika, who has resigned, caused great controversy in recent years in Algeria.

The debate began over the project, which took more than seven years to build, from choosing the company responsible for the construction, the Chinese giant, “China State Construction Engineering,” which hired workers from China, to its official cost of more than 750 million euros, much more than expected. Funded from the public treasury. Controversy also arose over the size of the mosque and its location in the urban periphery of Algiers.

The minaret of Hassan II Mosque in Casablanca, Morocco, was the highest in the world (210 meters) so far.

These were the details of the news The opening of the Algiers Mosque, the third largest mosque in... for this day. We hope that we have succeeded by giving you the full details and information. To follow all our news, you can subscribe to the alerts system or to one of our different systems to provide you with all that is new.