Study proves that new coronavirus affects the brain and details its... 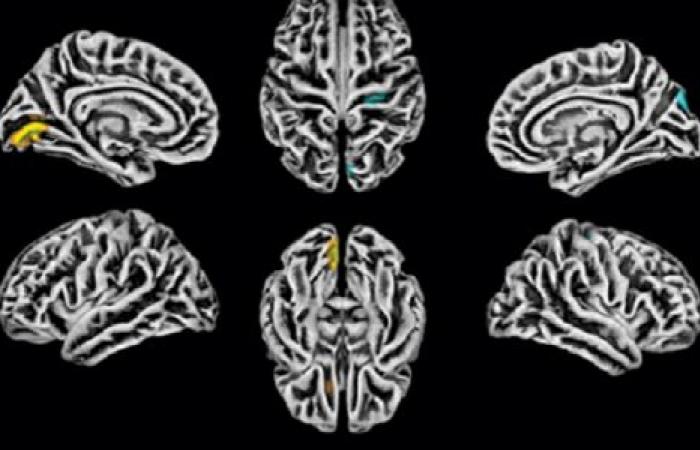 Brazilian study released yesterday (13) on the platform medRxiv proves that the Sars-CoV-2 virus is able to infect brain tissue cells, with astrocytes as the main target. The results also reveal that even individuals who had the mild form of COVID-19 can present significant changes in the structure of the cortex – the brain region that is richer in neurons and responsible for complex functions such as memory, attention, consciousness and language.

The investigation was conducted by several groups from Unicamp (State University of Campinas) and USP (University of São Paulo) – all financed by Fapesp. Researchers from the LNBio (National Biosciences Laboratory), D’Or Institute for Research and Education and UFRJ (Federal University of Rio de Janeiro).

“Two previous studies had detected the presence of the new coronavirus in the brain, but it was not known if it was in the blood, in the endothelial cells [que recobrem os vasos sanguíneos] or inside nerve cells. We showed for the first time that it actually infects and replicates in astrocytes and that this can decrease the viability of neurons “, tells Daniel Martins-de-Souza, a professor at Unicamp’s Institute of Biology (IB), a researcher at IDOR and one of the research coordinators.

Astrocytes are the most abundant cells in the central nervous system and perform various functions: they provide support and nutrients for neurons; they regulate the concentration of neurotransmitters and other substances with the potential to interfere with neuronal functioning, such as potassium; integrate the blood-brain barrier, helping to protect the brain against pathogens and toxins; and help maintain brain homeostasis.

The infection of this cell type was confirmed through experiments with brain tissue of 26 patients who died of COVID-19. The samples were collected during minimally invasive autopsy procedures conducted by pathologist Alexandre Fabro, professor at the Ribeirão Preto Medical School (FMRP-USP). The analyzes were coordinated by Thiago Cunha, professor at FMRP-USP and a member of the Inflammatory Diseases Research Center (CRID).

The researchers adopted a technique known as immunohistochemistry, which consists of using antibodies to mark viral antigens or components of the analyzed tissue, as Martins-de-Souza explains. “For example, we can put in the sample an antibody that when it binds to the astrocyte causes the cell to turn red; another that when it binds to the spike protein of Sars-CoV-2 marks the molecule green; and, finally, an antibody to mark the double-stranded viral RNA in purple, which only appears during the microorganism’s replication process. When all the images taken during the experiment were placed in overlap, we noticed that the three colors appear simultaneously only within the astrocytes. “

According to Cunha, the presence of the virus was confirmed in the 26 samples studied. In five of them, alterations were also found that suggested a possible damage to the central nervous system.

“We observed in these five cases signs of necrosis and inflammation, such as edema [inchaço causado por acúmulo de líquido], neuronal lesions and inflammatory cell infiltrates. But we only had access to a small part of the patients’ brains, so it is possible that similar signs were also present in the other 21 cases studied, but in different regions of the tissue “, says Cunha.

In another arm of the research, conducted at the Faculty of Medical Sciences (FCM) of Unicamp, magnetic resonance examinations were performed on 81 volunteers who contracted the mild form of COVID-19 and recovered. On average, face-to-face assessments took place 60 days after the date of the diagnostic test and one third of the participants still had neurological or neuropsychiatric symptoms. The main complaints were headache (40%), fatigue (40%), memory impairment (30%), anxiety (28%), loss of smell (28%), depression (20%), daytime sleepiness (25 %), loss of taste (16%) and libido (14%).

“We released a link so that those interested in participating in the research could register and, to our surprise, in a few days we already had over 200 volunteers, many of them polysymptomatic and with very varied complaints. In addition to the neuroimaging exam, they are being evaluated by means of neurological examination and standardized tests to measure performance in cognitive functions, such as memory, attention and reasoning flexibility. In the article we present the first results “, says Professor Clarissa Yasuda, member of the Research Institute on Neuroscience and Neurotechnology (BRAINN) .

Only people who had a diagnosis of covid-19 confirmed by RT-PCR and who did not need to be hospitalized were included in the research. The assessments were made after the end of the acute phase and the results were compared with data from 145 healthy and uninfected individuals.

By analyzing the MRI scans, it was possible to see that some regions of the volunteers’ cortex were less than the average thickness observed in the controls, while others showed an increase in size – which, according to the authors, could indicate some degree of edema.

“We observed atrophy in areas related, for example, to anxiety – one of the most frequent symptoms in the studied group. Considering that the average prevalence of anxiety disorders in the Brazilian population is 9%, the 28% we find is a high number and alarming. We did not expect these results in patients who had mild illness, “says Yasuda.

In the neuropsychological tests – made to assess cognitive functions – the study volunteers also did worse than the average of Brazilian individuals in some tasks. The results were adjusted according to the age, sex and education of each participant. The degree of fatigue reported by the participant to the researchers was also considered.

“The question that remains now is: are these symptoms temporary or permanent? To find out, we intend to continue to accompany these volunteers for some time,” says the researcher.

At the IB-Unicamp Neuroproteomics Laboratory, coordinated by Martins-de-Souza, several experiments were carried out with brain tissue of people who died of covid-19 and with astrocyte cultures in vitro to discover, biochemically, how infection with Sars-CoV-2 affects cells in the nervous system.

The necropsy samples were obtained through collaboration with the group of professor at the Faculty of Medicine at USP Paulo Saldiva. The entire set of proteins (proteome) present in the tissue was mapped by mass spectrometry – a technique that allows the discrimination of substances in biological samples according to the molecular mass.

“When comparing with results from uninfected individuals, we noticed that several proteins that had altered expression are abundant in astrocytes, which validates the findings obtained by immunohistochemistry”, says Martins-de-Souza. “In these cells, we observed changes in several biochemical pathways, especially those related to energy metabolism”, says the researcher.

The next step was to repeat the proteomic analysis in an infected laboratory astrocyte culture. The cells were obtained from induced pluripotent stem cells (IPS), a method that consists of reprogramming adult cells (from the skin or other easily accessible tissue) to make them assume a pluripotency stage similar to of embryonic stem cells. This first part was carried out in the laboratory of UFRJ professor Stevens Rehen, at IDOR. Then, Martins-de-Souza’s team induced, through chemical stimuli, the IPS cells to differentiate into neural stem cells and later into astrocytes.

“The results were similar to those of the analysis made on the tissue obtained by necropsy, that is, they indicated dysfunction in the energy metabolism. We then did a metabolomic analysis [do conjunto de metabólitos produzidos pelos astrócitos em cultura], which indicated changes in glucose metabolism. For some reason, the infected astrocyte starts to consume more glucose than normal and, despite that, the levels of pyruvate and lactate – the two main energy substrates – are greatly reduced in the cell “, he says.

As the researcher explains, lactate is one of the byproducts of glucose metabolism and the astrocyte exports this metabolite to the neuron, which uses it as an energy source. The analyses in vitro showed that the amount of lactate in the cell culture medium was normal, although it was reduced inside. “Apparently the astrocyte strives to maintain the supply of the energetic substrate to the neuron at the expense of its own functioning”, comments Martins-de-Souza.

As a result of this process, the mitochondria of astrocytes – organelles responsible for energy production – started to function in an altered way, which can influence the brain levels of neurotransmitters such as glutamate (which excites neurons and is related to memory and learning ) and gamma-aminobutyric acid (GABA, capable of inhibiting excessive neuronal firing and promoting a feeling of calm and relaxation).

“In another experiment, we tried to grow neurons in this medium where previously infected astrocytes were being grown and we observed that the cells die more than expected. That is, this culture medium ‘conditioned by the infected astrocytes’ decreased the viability of the neurons” , says Martins-de-Souza.

According to the researcher, the findings described in the article – still in the process of peer review – are in line with several works already published, which pointed to possible neurological and neuropsychiatric manifestations of COVID-19, but it goes a step further.

“There was still a big question: would brain dysfunction be due to systemic inflammation or would the virus be directly impairing the functioning of nerve cells by infecting them? Our results indicate that SARS-CoV-2 can actually enter brain cells and affect its operation “, he says.

In Cunha’s assessment, the next question to be answered is how the virus reaches the central nervous system and what is the mechanism used to enter astrocytes – which may give clues to possible interventions capable of stopping the infection.

“We also intend to do experiments with mice genetically modified to express human ACE2 [principal proteína usada pelo vírus para infectar as células]. The idea is to confirm in these animals whether there is a cause and effect relationship, that is, whether the infection alone is capable of inducing the changes that we observe in the brains of patients “, Cunha says.

Marcelo Mori, professor at IB-Unicamp and a member of the Obesity and Comorbidities Research Center (OCRC), points out that the research was only possible thanks to the collaboration of researchers with varied and complementary backgrounds and expertise. “This is an example that in order to do quality and competitive science, it is necessary to combine interdisciplinary efforts. It is difficult to compete internationally if we stay only within our laboratory, limited to the techniques we know and the equipment we have access to”, he says.

In all, the article has 74 authors. The experiments were conducted by four postdoctoral students: Fernanda Crunfli, Flávio P. Veras, Victor C. Carregari and Pedro H. Vendramini.

This text was originally published by Agência Fapesp.

These were the details of the news Study proves that new coronavirus affects the brain and details its... for this day. We hope that we have succeeded by giving you the full details and information. To follow all our news, you can subscribe to the alerts system or to one of our different systems to provide you with all that is new.