She talked about her rare disease … Jordanian Israa Al-Tayeh attracts... 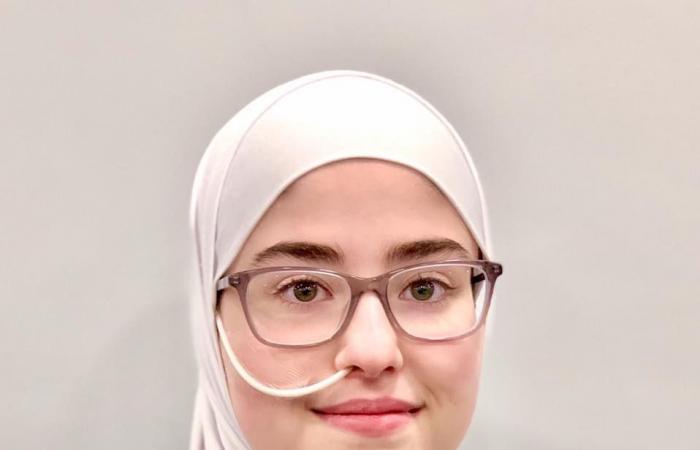 Turning the ordeal into a grant is a difficult thing, but the 18-year-old Jordanian girl, Israa Al-Tayeh, did so comfortably, despite her rare and serious illness that has no cure, her life continues naturally, and she is not satisfied with that, but rather provides her followers with positive energies through her posts on social media .

Israa’s case appeared to the public recently, when she gave some television interviews and talked about her illness and how she discovered the nature of the symptoms she was suffering from.

However, the girl’s responses to questions that she received through her Instagram account, a day ago, increased her popularity on social networking sites, and enabled her to attract thousands of followers in a few hours, in a tribute to her perseverance and broadcast of hope.

Israa said, in response to one of the questions, that she does not eat or drink and only enjoys its smell, or chewing it and then spitting it so that it does not open her appetite, and she lives on a tube connected to her nose, which changes every six months, providing her with her living needs until she sleeps and takes a bath.

In one of her television interviews, Israa said that she discovered her illness at the age of ten, when she began to suffer from severe constipation, dislocations in the joints, stomach pain, sensitivity of the skin, shortness of breath and lack of clear vision.

Israa went to most doctors in Jordan, where she lives, then she traveled with her family to Canada, but she did not find any result from trying to stop her suffering, or diagnose her condition.

Israa says that she discovered herself suffering from Ehlers-Danlos syndrome when she kept reading about rare diseases and comparing them with the symptoms she suffers.

About this discovery, he said in a video interview with the Jordanian “Al-Mamlaka” channel: “I felt happy when I discovered the nature of the disease that I suffer. I was laughing and crying at the same time because I knew that it was a disease without treatment.”

What is Ehlers-Danlos syndrome?

The Mayo Clinic says that Ehlers-Danlos syndrome is a group of rare disorders that primarily affect the skin, joints and walls of blood vessels.

People with Ehlers-Danlos syndrome usually have joints that are overly flexible, stretchy and weak skin.

In this context, Israa said that she experiences joint dislocation pain 30 to 40 times a day, saying: “It is very painful, and it means that your joints come out of place. In this case, a splint is supposed to be installed, but I used to put it back in place.”

This condition can become a problem in the case of wounds that require stitching because the skin is not strong enough to hold the stitches.

A more severe form of this disorder can rupture the walls of blood vessels, the intestine, or the uterus.

Because Ehlers-Danlos syndrome can have potentially dangerous complications in the event of pregnancy, it is important to talk to a genetic counselor before starting a family.

In response to Instagram’s questions, Israa said that “pregnancy is a danger to her and the children,” adding, “But having children who need adoption gives me hope.”

In response to Instagram’s questions, Israa said that she suffers from third-degree internal burns due to the heat trapped in her body.

Israa replied to the question, “Are you tired of the pain?” By saying: “This is a method chosen by God for me to be distinguished. Yes, I feel distressed and tired and I hope to live my life without pain, but (with hardship is ease).”

She explained that her health does not mean that she is poor, saying: “I do not like pity. When I say that I am sick, I mean by that, but I put pressure on myself.”

After answering these questions and spreading her answers widely on social media, Israa managed to attract 20,000 new followers to her Instagram account in ten hours.

These were the details of the news She talked about her rare disease … Jordanian Israa Al-Tayeh attracts... for this day. We hope that we have succeeded by giving you the full details and information. To follow all our news, you can subscribe to the alerts system or to one of our different systems to provide you with all that is new.