Ricardo describes the podium in Eiffel as his first 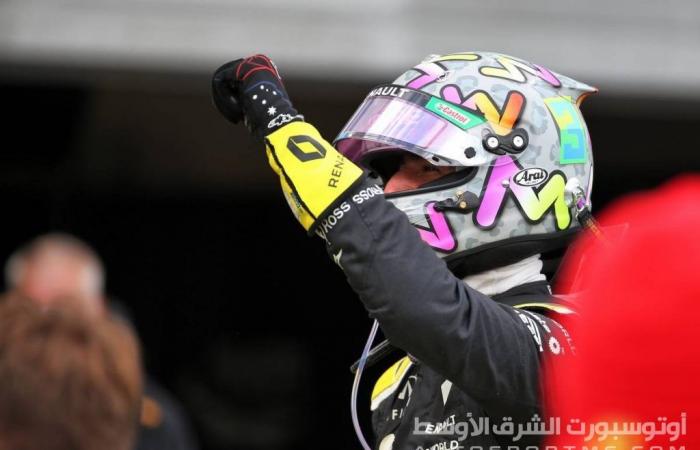 Renault driver Daniel Ricciardo described his rise to the podium at the Eiffel Grand Prix, Round 11 of the 2020 season of the Formula 1 World Championship, as if he was his first podium of his career.

Ricardo climbed to the podium for the first time since the 2018 season, when he was within the ranks of Red Bull, and then transferred to Renault in 2019.

Ricardo suffered somewhat with Renault, in light of the French team’s inability to keep up with the pace of the leading teams, and contented themselves with competing in the average rankings.

However, the Renault team made good progress in the 2020 season, while enjoying a stable and strong level of performance in various rounds, even if it could not compete with Mercedes and Red Bull in the lead, and this contributed to Ricardo getting his first podium with Renault, and the podium of Renault. The first since returning to Formula 1 as a factory team in 2016, at the Nürburgring.

That result came despite the great pressure that Ricardo was subjected to in the final laps of the race against his Racing Point opponent Sergio Perez.

A painful blow for Bottas as he withdraws from the Nürburgring

Ricardo is confident Renault has an integrated car

Ricardo said: “Frankly, I feel like this podium is my first in my professional career. The feeling that I feel at the moment, I am very happy and at the same time I feel shocked. ”

“Entering the safety car at the end of the race, I felt that I could overtake Max Verstappen, but our competition with each other allowed Sergio Perez to get close to me, and I thought he would overtake me at the fourth turn.”

He added, “There was a lot of pressure, and I defended my position to the best of my ability. Two and a half years have passed since I got to the podium last time, so I am very happy with this achievement. ”

These were the details of the news Ricardo describes the podium in Eiffel as his first for this day. We hope that we have succeeded by giving you the full details and information. To follow all our news, you can subscribe to the alerts system or to one of our different systems to provide you with all that is new.