The first response from Tamer Hosni to Ahmed El-Sakka: “I don’t... 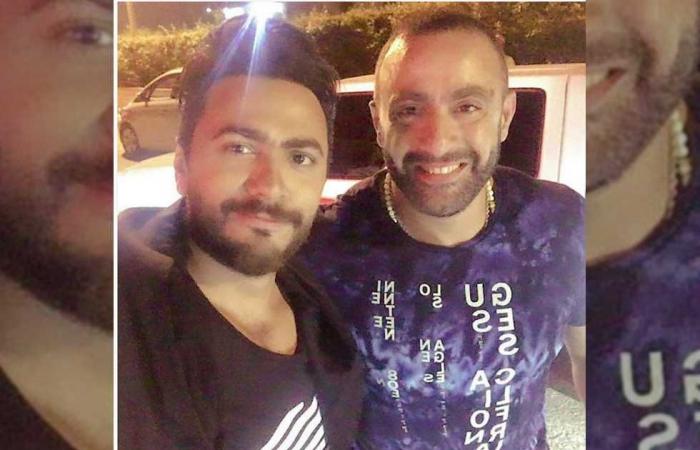 The artist Tamer Hosni responded to his disagreement with the artist Ahmed El-Sakka, because of the latter’s appearance in the movie “Money” as a guest of honor, and expressed his dissatisfaction with his appearance in the franchises and writing that he was a joint tournament with him, and that this hurt him psychologically and at work, as he said with the broadcaster Wafa Al Kilani yesterday via “Biography” program.

Tamer Hosni wrote, in a “story” feature on “Instagram”: “My love, my brother, the friend of the life and the star of the whole world, Ahmed El-Sakka. I wish you would have spoken to me between you and me if I were upset about any need or understood any wrong thing, because these needs cannot be missed and I was I hope that this speech will be closed here, but because after your speech on television, the honorable audience still has the right to understand the truth. ”

He continued: “To think of you, but, you spoke to me and told me a news story on a site with a hypothetical picture of the film on it and it was written that you are the hero in the film .. and I replied to you that this is a journalistic effort and the image is designed by the fans who are sure to rejoice in the news that we are together, even I said that this is the producing company. Because it is a big company that cannot work like this, because the film is sold abroad and inside the name of your brother Tamer Hosni, and originally the official film did not come out and all people saw it and you are not in it or it does not contain your name and all the heroes see decree, I didn’t make you upset about the truth, it would have been upset if the words had come down On my page or the page of the manufacturer ».

He continued: “I explained to you a year ago and we spoke twice after that, once I returned to you on your birthday and the other about your program. If you were not upset, you would say at that time, the film said a year ago, Ahmed. Not in it, because this will come back to us all with harm because people will enter the film, they will not find this talk, so it remains that we laugh at the people and we hit the film, and because I am sure I am honored if we are acting with some joint tournament because you are my beloved seriously and a star that I really love from my heart.

He concluded his talk about his participation in the series “Ould Al Ghalaba”: “Then, Haji Ahmed, when I brought you your series, many efforts were made from your honorable fans. They say the series is our heroism, and they say,“ No this is a guest of honor. You asked me to come to photograph at 8 oclock in the morning. I was with you within half an hour because an idea suddenly appeared in your brain and came to me that you were too precious to me, too much more than what you imagined, and I was happy with the efforts of your lovers and my lovers, even if my picture is small, or as a starring writer or a guest of honor, all this does not matter because I came to serve a friend My life and I hope for any words that will be in the interest of my brotherly series, and it will succeed and break the world. You are my love, Ahmed and Omar’s friend, so that I will not be mad at you. I don’t talk too long because I want you to be proud of me. ”

These were the details of the news The first response from Tamer Hosni to Ahmed El-Sakka: “I don’t... for this day. We hope that we have succeeded by giving you the full details and information. To follow all our news, you can subscribe to the alerts system or to one of our different systems to provide you with all that is new.