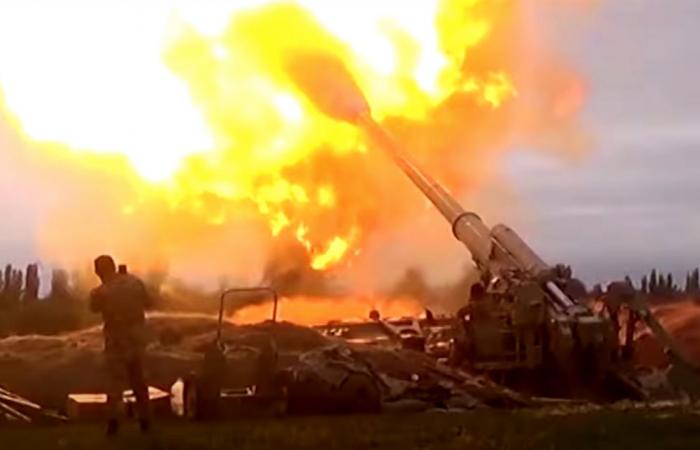 The intensity of the fighting between Armenia and Azerbaijan in the disputed Nagorno Karabakh region escalated today, resulting in the deaths of at least 30 people, on the second day of the clashes, and Armenia accused Turkey of direct intervention in the fighting on the side of Azerbaijan, while the UN Security Council holds an emergency closed meeting tomorrow To discuss developments in the territory.

The Azerbaijani and Armenian forces exchanged shelling with missiles and artillery, and the Armenian Ministry of Defense said that the Azerbaijani forces were launching a major attack across the southern axis of the Nagorno Karabakh region adjacent to the Araks River on the borders of Iran, and the northeastern axis of the region.

The ministry spokeswoman confirmed that the Armenian forces repelled the Azerbaijani attacks and caused heavy losses in equipment and lives, noting that more than 370 Azeri soldiers were killed and dozens were wounded, and 22 tanks and 10 vehicles were destroyed.

The ministry said that the Azerbaijani forces bombed with heavy artillery, Stepankert, the capital of Nagorno Karabakh and the surrounding villages.

The authorities of the Nagorno Karabakh region – which is not recognized internationally – confirmed that the Armenian forces had regained control of vital sites that had been controlled by the Azerbaijani forces yesterday, and announced that the number of Armenian soldiers killed in the confrontations rose to 59. The Interfax news agency quoted a representative of the Armenian Ministry of Defense as saying that 200 Armenians were injured.

And the Reuters news agency quoted Angela Franjian, a documentary filmmaker in the disputed region, that residents have resorted to hideouts, and that the sounds of bombing are constantly heard, indicating that all shops have closed and the streets have become deserted. The Al-Jazeera correspondent confirmed the suspension of flights to and from the airport of the Azerbaijani capital, Baku, due to the declaration of a state of war in the country, and revealed that the Armenian authorities closed the road leading to the northern part of the Nagorno Karabakh region.

Accuse Turkey
Armenian President Armen Sarkisian accused Turkey of supporting the Azerbaijani forces in its military operations in the region, with F-16 fighters, mercenaries, military advisors and drones, which the Baku authorities denied. Sarkisian added in a press statement that Turkey, a member of the North Atlantic Treaty Organization (NATO), is also helping Azerbaijan with drones and experts to launch cyber attacks.

Sarkissian indicated that the conflict in Karabakh region can be resolved by returning to dialogue within the framework of the Minsk Group, with the participation of Russia, the United States, France and the Organization for Security and Cooperation in Europe, to which the Minsk group belongs.

Today, the Armenian parliament condemned what it described as a “comprehensive military attack” from Azerbaijan on Nagorno Karabakh, and said that Turkey’s intervention, which is helping Baku in the crisis, threatens to destabilize the region, and the Armenian ambassador to Moscow Vardan Toganyan threatened that his country would use the Russian Iskander missiles if Turkey began using F-16s in the Naguzni Karabakh region.

On the other hand, Turkish President Recep Tayyip Erdogan condemned what he described as Armenia’s aggression on Azerbaijani lands. He said that Ankara stands with all its capabilities on the side of Baku, and Turkish Defense Minister Hulusi Akar stressed that his country stands by Azerbaijan, calling on Armenia to withdraw what he described as mercenaries and terrorists.

The Azerbaijani novel
The Azerbaijani foreign ministry spokeswoman said that her country’s forces “regained 7 villages from the Armenian forces,” stressing that what her country is doing is a response to what it called the new war that Armenia started. The spokeswoman added that Armenia was not able to achieve its goals, and said that there is no peace before the withdrawal of Armenian forces. From the areas it occupied, as she described it.

The President of Azerbaijan, Ilham Aliyev, signed a decree to start the partial military mobilization in the country, against the background of the battles with Armenia in the Karabakh region, and the two sides accused each other of responsibility for the start of the bombing on Sunday.

Today, Anadolu Agency quoted Azeri security sources as saying that the Azerbaijani forces bombed more than 400 Armenian targets, and managed to destroy more than 10 air defense systems and about 20 armored vehicles belonging to the Armenian army in the region.

Security Council
In a related context, diplomatic sources told the French Press Agency that the UN Security Council will hold an emergency closed meeting tomorrow, Tuesday, in which it will discuss developments in the Nagorno Karabakh region.

The battles in the disputed territory coincide with the convening of the United Nations General Assembly, and raise fears of a large-scale war between Azerbaijan and Armenia in the South Caucasus, where Ankara and Moscow compete. Russia and Iran offered mediation between Yerevan and Baku to settle the dispute over the disputed territory.

Under international law, the Nagorno Karabakh region is part of Azerbaijan, but the Armenians – who make up the vast majority of its population – reject Baku rule. The region manages its private affairs with the support of Armenia since its defection from Azerbaijan during a conflict that erupted with the collapse of the Soviet Union in 1991. Despite the agreement on a ceasefire in 1994 after thousands of deaths and the displacement of larger numbers, the two countries frequently exchange accusations of launching attacks within the region and on the borders between them.

These were the details of the news Fighting escalated in Karabakh … Armenia accuses Turkey of direct intervention... for this day. We hope that we have succeeded by giving you the full details and information. To follow all our news, you can subscribe to the alerts system or to one of our different systems to provide you with all that is new.