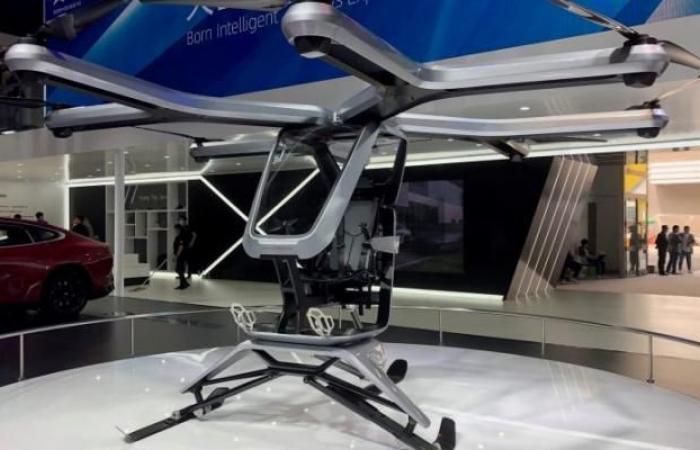 Chinese electric car start-up Xpeng, backed by Alibaba Group, has unveiled the first in a series of electric flying vehicles that the startup said will develop at the Beijing Auto Show.

The first model of the flying car acquired special characteristics, as it resembles a drone that carries people more than it is a flying car, and it consists of eight fans and a frame that resembles a capsule.

Xpeng adopted the development of the flying car through its Xpeng Heitech technology unit, majority-owned by the company, and CEO He Xiaopeng.

Electric cars are one of the elements of attraction at the Chinese exhibition, and China is promoting this sector, which it hopes will capture 25% of the auto market by 2025.

“This vehicle can accommodate two passengers, and is designed to fly at heights ranging from 5 to 25 meters,” Xpeng said in a statement.

However, she added, “The project is still in the concept development stage, and it will conduct an assessment of the vehicle’s future before initiating any major investments.”

According to Brian Go, Vice Chairman of the Board of Directors, electric cars will not only be capable of autonomous driving for intelligent mobility in the future, but will also be able to other devices that can create a multi-dimensional ecosystem.

The Beijing International Auto Show has enjoyed a large audience, as it is the only international event in the sector during 2020, and it comes amid efforts by auto companies to revitalize their sales amid the Corona pandemic.

However, many of the companies participating in the display were forced to offer the new models virtually due to travel restrictions between countries.

Yesterday, the exhibition witnessed the participation of 800 cars, 82 of which were shown for the first time. It is expected that global car sales will decrease by 20% by the end of this year.

According to Standard & Poor’s, China is the only country expected to restore sales levels achieved in 2019 within the next two years.

These were the details of the news Alibaba, China, unveils its first flying electric car for this day. We hope that we have succeeded by giving you the full details and information. To follow all our news, you can subscribe to the alerts system or to one of our different systems to provide you with all that is new.