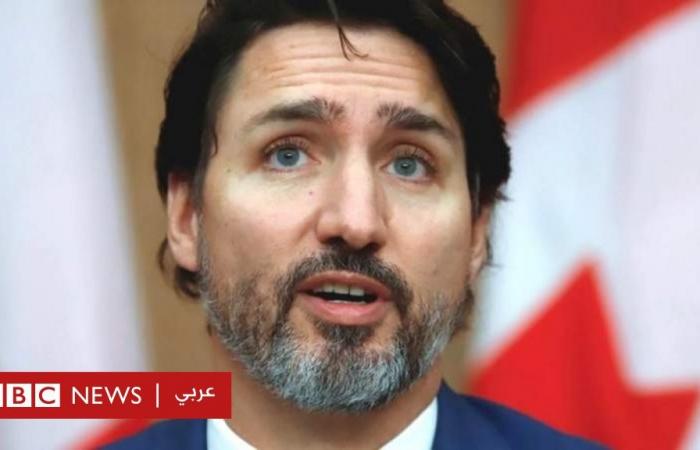 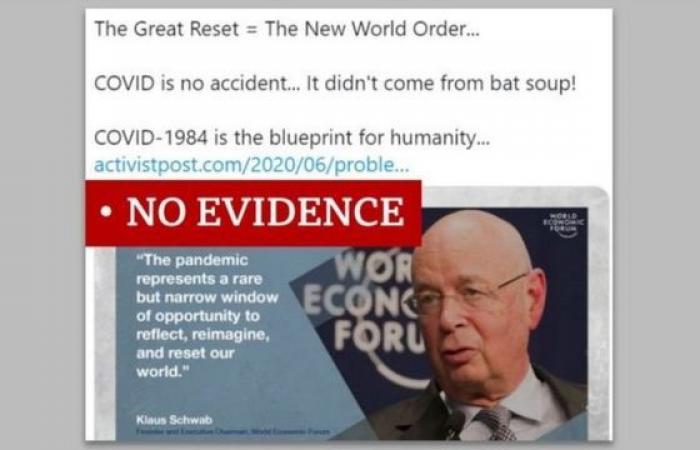 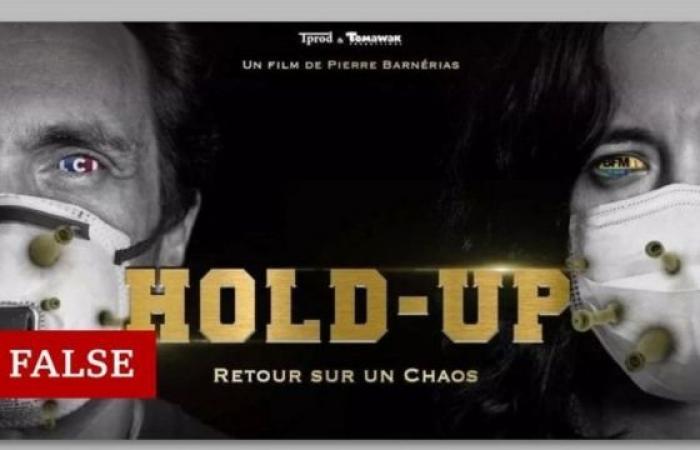 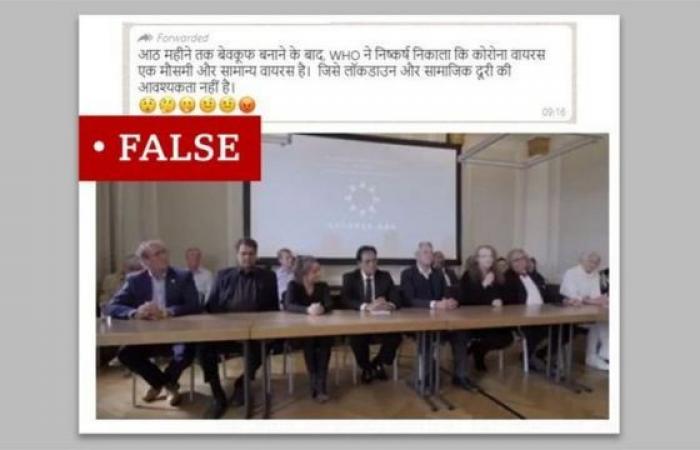 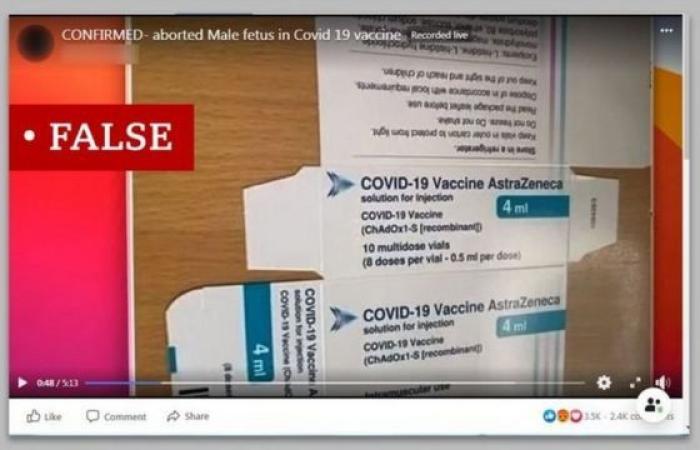 Misinformation about the COVID-19 vaccine and conspiracy theories surrounding the Coronavirus pandemic continues to circulate on social media.

In the following lines, we present the information that we have verified this week.

We start with the baseless conspiracy theory known as “the comprehensive reset”, which claims that a group of world leaders orchestrated the outbreak of the epidemic in order to control the global economy.

The theory’s roots go back to an actual plan called “comprehensive readjustment” drawn up by the World Economic Forum, an annual conference of political and economic icons. The plan examines how countries can recover from the economic losses caused by the coronavirus epidemic.

The World Economic Forum’s recovery plan has been interpreted as “evil,” first by groups of conspiracy theorists on social media, then by prominent conservative spoons, leading to tens of thousands of interactions on Facebook and Twitter.

And it began to spread globally on Twitter, when a video clip of Canadian Prime Minister Justin Trudeau spread widely during his participation in a United Nations meeting in which he said that the epidemic provided an opportunity for “reset.”

This has sparked new allegations in Canada and abroad that a group of world leaders are using the pandemic to introduce a number of destructive socialist and environmental policies.

When asked about conspiracy theories over the weekend, Trudeau replied, “I think we are at a time of anxiety, where people are looking for reasons for the things that happen to them. We see a lot of people falling prey to disinformation.”

A video clip from last August and the number of views recorded on YouTube is approaching 3 million, claims that only US President Donald Trump can thwart this secret plot, which uses Covid 19 to subdue the US economy until the process of “reset” begins and takes people In “begging” for vaccines.

However, the suggestion that politicians planned the outbreak or that they are using it to destroy capitalism is not supported at all.

Nor is there any support for the notion that the World Economic Forum has the power to dictate to other countries what to do, or that it is coordinating a secret assembly of world leaders.

A French documentary that points to a secret world plot has also spread widely on YouTube and other social media.

The two-and-a-half-hour movie is titled “Hold Up” – and promises to reveal the “truth” about Covid 19.

Instead, he is promoting a plethora of allegations that have been exposed in the past – including claims that wearing masks is dangerous and that the world’s elite planned the epidemic in some way.

The film became known as the French “Epidemic Plan”, referring to a similar English-language video about a conspiracy theory, and the false allegations it contained were exposed earlier this year.

Like its predecessor, Hold Up has become a hit on social media, with more than a million views over the past few days.

YouTube says the movie does not violate its misinformation policies, although it states that it has restricted its spread in line with its rules for dealing with content that could mislead users in harmful ways.

In India, we found samples of a WhatsApp message circulating in Hindi that made false claims about WHO guidelines.

The letter alleges that the World Health Organization has updated its website in which it said that the Corona virus does not pose a more threat than seasonal influenza and does not require measures to close and wear masks.

For its part, the World Health Organization stated that the message does not represent its point of view, and that its guidelines regarding wearing masks and social distancing procedures have not changed.

Official figures published last October reveal that the number of deaths due to Covid 19 in England and Wales is three times more than deaths from influenza and pneumonia.

The message was circulated on WhatsApp, accompanied by a miniature version of a video clip posted in English on YouTube last month. The video clip includes false claims about treatments for Corona virus, and the clip was removed from the YouTube platform for violating the site’s policies.

A video clip has been shared on an anti-vaccination page on Facebook thousands of times, and excerpts from it have been circulated on WhatsApp and Instagram.

During the video, a woman announces voice over pictures of what appear to be AstraZeneca Covid-19 vaccine packages, which they are still testing.

The woman is urging people to share the video if they do not want to be “injected with parts of tissue from aborted fetuses or for their DNA to be changed.”

These two allegations are false. The vaccine does not contain any fetal tissue and will not alter the human DNA.

The woman claims the vaccine contains tissue from the lung of a male fetus that was aborted at 14 weeks of age.

This is a false claim.

“The embryonic cells are not used in any process to produce a vaccine,” says Dr. Michael, an expert at Southampton University.

The video clip refers to a study that allegedly provides evidence of the vaccine contents. However, the video narrator’s explanation of this study is wrong, as the study referred to deals with how the vaccine interacted with human cells inside the laboratory.

This confusion may be due to the fact that the vaccine development process includes a stage during which cells grown in the laboratory are descended from embryonic cells.

This technology was developed in the 1960s, and embryos are not aborted for the purpose of scientific research.

Dr. David Matthews, a professor at the University of Bristol, explains that many vaccines are produced in this way, adding that after that, any traces of cells are completely removed from the vaccine “according to exceptionally high standards.”

The Oxford University vaccine developers say that they have conducted their experiments on cloned cells, and that these cells are not the same as the cells of aborted fetuses.

These cells perform a factory-like operation to produce a very weak version of the virus that has been modified to function as a vaccine.

Although the synthesis of this version of the virus takes place through the use of these cells, this cellular material is subsequently removed, when the virus undergoes purification, and therefore it will not be a component of the vaccine.

These were the details of the news Coronavirus vaccine: Fact-finding on the “French epidemic blueprint”, aborted fetal tissue... for this day. We hope that we have succeeded by giving you the full details and information. To follow all our news, you can subscribe to the alerts system or to one of our different systems to provide you with all that is new.