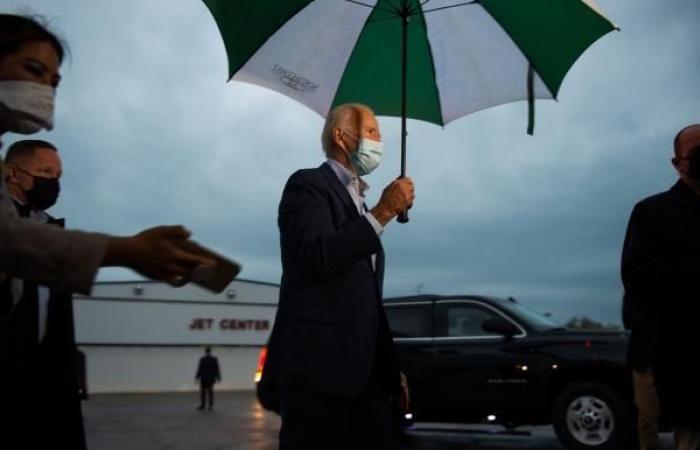 Law firms and wealth fund managers in the United States began profiting from the US elections early and even before voting began, urging the wealthy to protect their fortunes from the possibility of Democratic candidate Joe Biden winning the US presidency in the November 3 election.

Experts in wealth and the legal process for wealth taxation are advising the rich in the United States to take urgent steps to protect their money from taxation in the event the Democratic Party wins a majority in the House of Representatives and Congress that passes the legislation in the country.
There is intense enthusiasm among the actors in the Democratic Party to bridge the income gap between the rich and the poor in the United States, which means that Joe Biden in the event of the Democratic Party sweeping the two houses of Congress will be able to quickly pass his proposal for imposing a wealth tax on companies and the rich in the United States.
Although the Democratic candidate, Joe Biden, has not yet announced a detailed draft of taxes on the wealthy and corporations, he suggested in his election program a set of means to increase government income, so that he will be able to spend on health, infrastructure, and clean environment projects. All Biden’s proposals to increase government income are aimed at raising taxes on US companies and wealthy individuals.
According to the calculations of the US credit rating agency Moody’s, by increasing taxes on companies and individuals whose annual income exceeds $ 400,000, the US government will be able to collect additional taxes estimated at $ 4.1 trillion over ten years, and it will also be able to collect $ 267 billion from Taxes on luxury properties valued at over $ 3.5 million. Among other proposals put forward by Joe Biden is to impose a 40% tax on luxury real estate.

In this regard, investment banks and companies specializing in wealth management are proposing to the rich to take advantage of the real estate and asset tax law that US President Donald Trump approved in 2017 for the benefit of wealthy individuals. The law raised the tax exemption on wealth that could be passed on to children from $ 11.58 million to $ 23.16 million.
“We have informed the wealthy of the need to benefit from the tax exemption law before it is amended in the event that the Democratic Party wins … We told them to use this advantage now, or you will lose part of your wealth,” said an expert at Mellon Wealth Management.
In this regard, experts believe that if the wealthy wait until the US election result is announced, they may not be able to transfer part of their assets to their children before changing the exemption law, simply because the legal and administrative procedures and the process of determining the type of assets that will be transferred to the children will take time. These operations are carried out legally.
In this regard, Edward Raine, an expert at the New York law firm with the law firm in New York, said: “There is an avalanche of requests from wealthy people to transfer part of their assets to their children, so we say to the wealthy, hurry up and come to us because time is short and we will not have time for you in the future.”
According to Rain, the most appropriate means of transferring wealth to children is to create a “trust fund” for the heirs or lend it directly to the children. He says that if Joe Biden wins and the Democrats sweep both houses in Congress, the wealthy can write direct letters to forgive loans or debts to children.
According to the New York Times, US millionaires have benefited from the support provided by the Trump administration during the Corona pandemic more than others, such as tax breaks granted to companies earning more than $ 25 million annually.
The US Congressional Tax Committee says that 80% of the tax exemptions offered during the crisis went to only 43,000 people who earn more than $ 1 million annually. These exemptions cost the state about $ 90 billion this year alone.

The Federal Reserve (US Central Bank) also worked to increase the wealth of the rich by reducing the interest rate, making free money available through short loan repurchase programs, and buying corporate debt to protect them from falling into bankruptcy.
And a study issued by the auditing company “Price Water House” and the Swiss bank “UBS” noted that the wealth of billionaires in the world rose to the highest levels, reaching its value to 10.2 trillion dollars at the end of last July.
On top of those who benefited from the stimulus processes in the world are the rich in the United States, as the fortunes of eight American billionaires rose by a trillion dollars during the pandemic, and among the most prominent of these eight are three billionaires, Eric Yuan, Chairman of the Board of Directors of the Zoom digital meeting platform, whose wealth has doubled in half to reach $ 7.57 billion, Elon Musk, president of Tesla, who made $ 8 billion, and Jeff Bezos, president of Amazon Digital Shopping, whose fortune has increased by $ 25 billion since the beginning of this year. And it seems that the wealthy who strongly support Joe Biden’s campaign are working to benefit from the tax breaks that Trump approved over the past years.

These were the details of the news America’s rich are preparing to protect their money from Biden taxes for this day. We hope that we have succeeded by giving you the full details and information. To follow all our news, you can subscribe to the alerts system or to one of our different systems to provide you with all that is new.