Saudi Arabia: Iran’s support for militias in Yemen and Lebanon is... 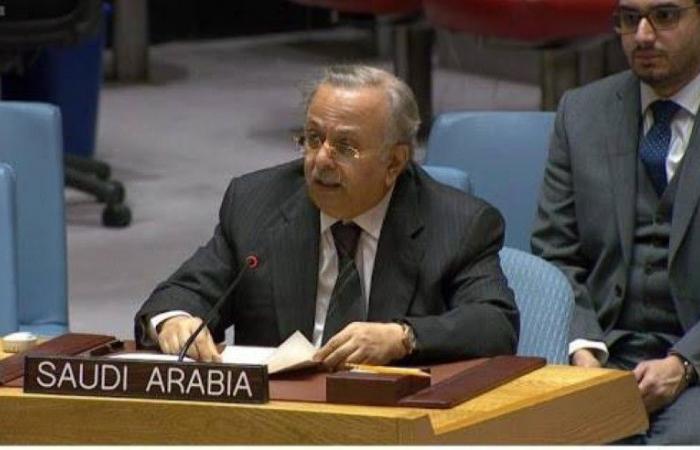 The Kingdom affirmed the importance of efforts that achieve the goals of eliminating nuclear weapons, especially in the Middle East region. Indicating that establishing security and stability in any region does not come through possessing weapons of mass destruction, but can be achieved through cooperation and consultation between countries, and the pursuit of development and progress, and avoiding the race to possess this weapon that destroys humanity.

This came in the Kingdom’s speech, delivered by the permanent representative of the Kingdom of Saudi Arabia to the United Nations, Ambassador Abdullah bin Yahya Al-Muallami, before the First Committee of the work of the seventy-fifth session of the United Nations General Assembly.

Ambassador Al-Muallami said: It is regrettable that the Middle East region remains elusive to international and regional efforts to make it a nuclear-weapon-free zone in light of the availability of international consensus and an urgent regional desire to make the region nuclear-weapon-free, again recalling what was confirmed by the NPT review conferences. Concerning the demand of Israel – the only country in the Middle East that is still outside the treaty – to quickly accede to the treaty and subject all its nuclear facilities to the comprehensive safeguards system of the International Atomic Energy Agency, in a way that contributes to maintaining peace and security, maintaining stability and achieving security for all peoples of the region.

His Excellency indicated that the Kingdom of Saudi Arabia thanks – in this regard – the sisterly Hashemite Kingdom of Jordan for its distinguished presidency of the work of the first session of the conference on the establishment of a zone free of nuclear weapons and other weapons of mass destruction in the Middle East, looking forward to supporting the presidency of the sisterly State of Kuwait for the second session. .

Al-Muallami added: The Kingdom’s previous support for the nuclear agreement between Iran and the countries of the Group of 1 + 5 was based on its complete conviction of the necessity of working on everything that would limit the spread of weapons of mass destruction in the Middle East and the world.

The Kingdom also expressed, in the speech delivered by His Excellency the Permanent Representative to the United Nations, its deep concern about Iran’s continued failure to abide by its nuclear pledges, the most recent of which was what the International Atomic Energy Agency (IAEA) stated, that Iran’s stockpile of enriched uranium currently exceeds ten times the limit stipulated in The international nuclear agreement with Iran, which is a continuation of the Iranian escalation in the series of violations that were reflected in previous reports issued by the Director General of the International Atomic Energy Agency.

The Kingdom stressed the importance of a comprehensive international agreement regarding Iran’s nuclear program, which guarantees preventing it from obtaining nuclear weapons, ensures that its destabilizing behavior in the region and the world is addressed and that it sponsors terrorism, and prevents it from carrying out any kind of provocations in the future, which will reintegrate it into the international community and lift it. All sanctions are for the benefit and well-being of the Iranian people.

His Excellency Ambassador Al-Muallami continued, saying: The Kingdom of Saudi Arabia affirms the inherent right of all countries to the peaceful use of nuclear energy in accordance with the standards and procedures of the International Atomic Energy Agency and under its supervision, and supports the position to facilitate the transfer of technology, expertise and equipment related to the possession of atomic energy for peaceful uses, and also urges industrialized countries. To cooperate to remove obstacles placed in the way of technology transfer in these areas to developing countries.

He added: The Kingdom of Saudi Arabia stresses the great importance of activating the United Nations program to prevent, combat and eradicate the illicit trade in small arms and light weapons, especially with regard to combating the phenomenon of supplying weapons to terrorists and illegal armed groups, noting that in this regard, the Kingdom calls on society The international community to stand firmly against what Iran is doing in providing terrorist militias with weapons and logistical support for these militias in Yemen, Lebanon and other countries in the Middle East, in flagrant violation of all international resolutions in this regard, including Security Council Resolution 2231.

He said: The Kingdom shares the international community’s interest and aspiration for the success of the tenth review conference of the Nuclear Non-Proliferation Treaty proposed to be held in January 2021 AD, indicating that the Kingdom will work on full cooperation for the success of the conference’s work, through its full support for the president of the next review conference and coming out with a final document that reflects The aspirations of all countries, to achieve a world free from the dangers and threats of nuclear weapons, in which the peoples enjoy peace, stability and peace.

Al-Mouallimi concluded the speech, affirming the belief of the Kingdom of Saudi Arabia that the international will is capable of reaching radical solutions to all problems that obstruct the way to reaching a solution to many of the issues before the committee.

These were the details of the news Saudi Arabia: Iran’s support for militias in Yemen and Lebanon is... for this day. We hope that we have succeeded by giving you the full details and information. To follow all our news, you can subscribe to the alerts system or to one of our different systems to provide you with all that is new.