Saudi Aramco exports the first shipment of blue ammonia to the... 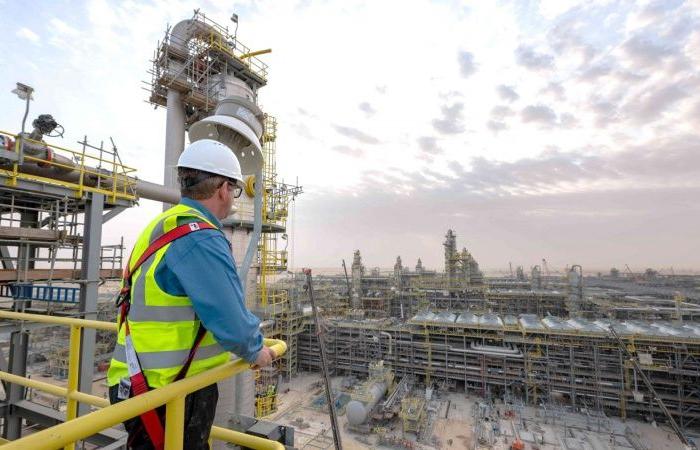 Riyadh – Saudi Aramco managed to export the first shipment of blue ammonia to Japan as part of the Kingdom’s endeavor to diversify energy sources, especially hydrogen, which strengthens the Kingdom’s strategy led by Crown Prince Mohammed bin Salman to reduce dependence on oil.

The Saudi Press Agency (SPA) reported that this initiative is supported by the Japanese Ministry of Economy, Trade and Industry “METI”, whereby 40 tons of high-quality blue ammonia were exported to Japan for use in generating carbon-free energy.

This achievement comes amid growing expectations for the role that hydrogen will play in the global energy system, as ammonia, a compound consisting of three atoms of hydrogen and one atom of nitrogen, can contribute to meeting the challenges of rising global energy demand in a reliable, sustainable and affordable way.

The Saudi-Japanese blue ammonia supply network stretches across the entire value chain, including converting hydrocarbons into hydrogen and then into ammonia, while simultaneously capturing associated CO2 emissions, and the challenges associated with shipping blue ammonia to Japan were addressed.

Saudi Arabia seeks to reduce dependence on oil and bring in new sources of sustainable returns in line with global shifts in the field of clean energy.

This achievement highlights one of the many pathways within the circular carbon economy concept (CCI), which is a framework in which carbon dioxide emissions are reduced, removed, recycled, and reused – rather than released into the atmosphere.

The chief technical officer of Saudi Aramco, Ahmed Al-Khwaiter, expects the use of hydrogen in the global energy system to increase, as this first shipment in the world represents an important opportunity for Saudi Aramco to display the potential of hydrocarbons as a reliable source of hydrogen and low carbon ammonia.

Al-Khwaiter noted the successful partnership between Saudi Arabia and Japan, which is essential in achieving a circular carbon economy, which the Kingdom supports during its current presidency of the G20 summit, noting that Saudi Aramco is working with various partners from all over the world to find solutions by spreading advanced technologies to produce low energy. Carbon to meet the global climate challenge.

For his part, Masakazu Toyoda, Chairman and CEO of the Japan Energy Economics Institute, blue ammonia is very important to Japan’s ambitions in terms of reducing carbon emissions in order to maintain a balance between the environment and the economy.

About 10 percent of the energy in Japan can be generated by 30 million tons of blue ammonia, confirming that this substance can begin to be released jointly in the current power plants, and then we will eventually move to mono-burning with 100 percent blue ammonia.

There are countries like Japan that cannot necessarily benefit from carbon capture, exploitation and storage or oil recovery due to their geological conditions, but neutral ammonia / blue carbon hydrogen gas will help overcome this obstacle.

In turn, SABIC Vice President for Energy Efficiency and Carbon Management, Dr. Fahad Al-Shuraihi, noted the possibility of economically benefiting from the existing infrastructure for hydrogen and ammonia production through carbon dioxide capture, as experimentation in the entire supply chain along with integrated petrochemical facilities will play an important role in providing ammonia. Blue to the world.

Ammonia contains about 18 percent of hydrogen by weight, a chemical that is widely traded globally, does not release carbon dioxide emissions when burned in the thermal power plant, and has the potential to make a major contribution to the future of clean, safe and affordable energy. Reasonable.

Since the construction of the huge NEOM project for hydrogen production last August, Saudi Arabia has entered a new phase in developing energy sources in an environmentally friendly way, in preparation for exporting it to global markets.

Founded in June 2019, NEOM has struck a deal with Air Products and AccuPower worth $ 5 billion.

This project, which is among the largest in the world, aims to provide sustainable solutions to the global transport sector and to face the challenges of climate change through practical solutions to reduce carbon emissions.

The renewable hydrogen project is the largest of its kind in the world and its importance lies in its consistency with NEOM’s efforts to achieve leadership in the production of green hydrogen and green fuels globally.

The project will be a focal point in NEOM’s journey to become the most important destination internationally in providing sustainable solutions in a way that attracts investors and the best minds from all over the world to accelerate human development.

Crown Prince Mohammed bin Salman announced plans for the region, which cost half a trillion dollars to construct, over an area of ​​about 26.5 thousand square kilometers, during an international investment conference held in Riyadh in October 2017.

The project is located in the far northwest of Saudi Arabia, and includes land within the Egyptian-Jordanian borders, and extends over 460 km on the Red Sea coast, where it will provide many investment opportunities.

The project falls within the framework of the ambitious aspirations of Vision 2030 to transform the Gulf country into a leading global model in various aspects of life, by focusing on bringing value chains in industries and technology.

The project will open the door to many promising opportunities in the field of green hydrogen production, and will enhance the country’s ability to work with countries of the world to achieve its goals in producing clean energy.

It will also be keen to employ expertise and the latest in advanced technologies in the field of utilizing solar and wind energy to produce sustainable and globally available green energy.

These were the details of the news Saudi Aramco exports the first shipment of blue ammonia to the... for this day. We hope that we have succeeded by giving you the full details and information. To follow all our news, you can subscribe to the alerts system or to one of our different systems to provide you with all that is new.