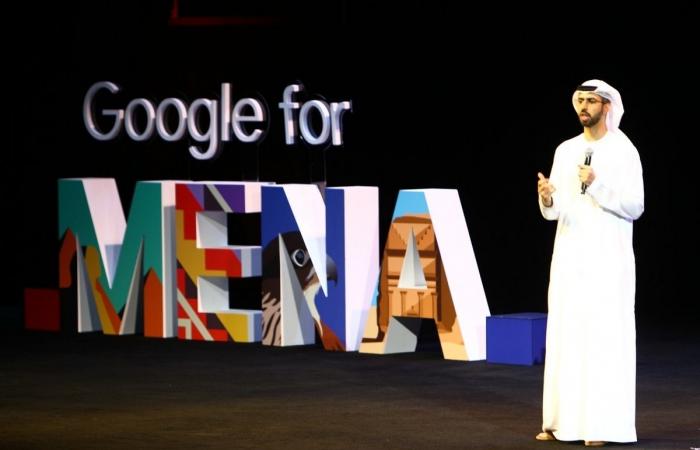 Thank you for reading the news about UAE AI Minister challenges youthful to innovate, reclaim region's old glory and now with the details

Aden - Yasmine El Tohamy - Those who will create change are those who have the vision and energy, Al Olama says at major Google event

The Middle East and especially the UAE have all the tools to be a hub of technology, and the spark that will ignite this rally will be the youthful, who would help the region reclaim its old glory, the UAE's top AI official stressed.

"We have all the parameters to succeed; all we need is the mindset and to rally the youth to work towards that goal," Omar bin Sultan Al Olama, UAE Minister of State for Artificial Intelligence, said.

Al Olama was speaking at the first-ever Google for Mena, the Internet giant's largest such event that gathered government representatives, business leaders, developers and entrepreneurs in Dubai on Tuesday.

At the occasion - which also served as a rallying cry for more and continued innovation - Google also rolled out a slew of services for the Arab world, part of its commitment to cater to local requirements and tastes.

Al Olama - himself the world's first and youngest AI minister at the time of his appointment in 2017 - kicked off his keynote with a short history of how the Arab region was, in ancient times, the hub of technology back then: Between the years 813 to 1515, the Middle East used to export science, technology and innovation to the rest of the world.

"We were the envy of all the civilisations of the world," he said. "And many of the foundations that were necessary for [technologies like] AI were from this region, like the algorithm."

Through the centuries, however, the region's leadership diminished, overtaken by other parts of the world. Reclaiming that, however, isn't all that difficult.

"If we were in that position back then, why are we in this position today? Why are we importing technology; why can't we create them like we did in the past?" Al Olama said.

"We need to educate the present about the past. [as] the late Sheikh Zayed bin Sultan Al Nahyan said, 'those who do not know their past will not know what their future is going to look like and cannot be a part of the present'," he stressed.

Al Olama also encouraged the audience to contribute so that the Middle East will be a major "exporter" of innovation.

"We see a technology, we see its impact, but we need to ensure that we play a fundamental role in ensuring that it grows and comes out of the region for the rest of the world," he added. "We need to think broader than the UAE."

And youth isn't just a matter of age: While indeed there are over 110 million in the region considered as youth, there is also what Al Olama describes as a "youthful mindset" in everyone else that can be harnessed for this endeavour.

"I believe each and every one of you is going to shape the future. you having the energy will allow you to contribute to the future, whether it be by developing the future, advocating for a positive future or by volunteering," Al Olama said.

Google's investments have yielded positive results for all stakeholders. Lino Cattaruzzi, managing director of Google in the Mena, said in a presentation that the business economic impact the company has contributed to the UAE, Saudi Arabia and Egypt are at Dh4.5 billion, SR4.3 billion and 5.2 billion Egyptian pounds, respectively.

And with 50 million additional users projected to come online next year, he says that Google is committed to "scale our digital skills programme to open more opportunities for more people [in the Mena]".

Google research found out that by 2020, one in every five jobs in the Arab world will require digital skills, and that over 300 million new jobs will have to be created by 2050.

At the event, Google announced that it has made its Arabic Search experience richer and more visual, with a new display of information contained in a single box, refining results for movie timings, shows, music and sports, which are the top things people search for in Arabic.

The company also announced that its virtual companion, Google Assistant, is now available in Arabic in 15 countries in the region, including the UAE, Bahrain, Kuwait, Oman, Qatar, Algeria, Iraq, Jordan, Lebanon, Libya, Mauritania, Morocco, Palestine, Tunisia and Yemen; it will be able to understand local dialects in these nations. This feature was launched in Saudi Arabia and Egypt earlier this year.

Google says that more than 20 per cent of Arabic users have used their voice to control their smartphone; this figure goes up at over 65 per cent when it comes to those who have sent a voice message.

For Maps, Google has added a couple of new services: Stay Safe, which gives users on off-route alert when a driver has deviated from a suggested route by over 500 metres; and a motorcycle mode in Egypt to help navigate through traffic and avoid clogged routes.

The company added that more than 20 million residential and commercial buildings, over 1.2 million businesses and more than 200,000km of roads have been added to Maps from the region.

In addition, Google is regranting $1 million to Injaz, a non-governmental organisation that specialises in youth training, in order to scale digital skills development and reach 100,000 more individuals by 2020.

These were the details of the news UAE AI Minister challenges youthful to innovate, reclaim region's old glory for this day. We hope that we have succeeded by giving you the full details and information. To follow all our news, you can subscribe to the alerts system or to one of our different systems to provide you with all that is new.