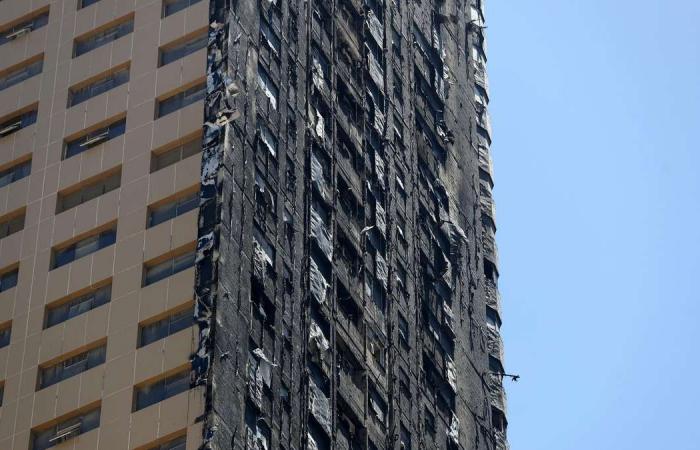 Thank you for your reading and interest in the news Sharjah fire: Aluminium cladding blamed as authorities to probe towers across emirate and now with details

Abbco Tower after the massive fire in Sharjah. Chris Whiteoak / The National

Abbco Tower the morning after the fire. Sharjah. Chris Whiteoak / The National

Abbco Tower after the massive fire in Sharjah. Chris Whiteoak / The National

Abbco Tower after the fire which gutted the building. Chris Whiteoak / The National

The area around Abbco Tower. Chris Whiteoak / The National

Fire damage to Abbco Tower after a huge blaze on Tuesday night. The building was fitted with cladding that was banned in 2016. Chris Whiteoak / The National

Families watch as flames spread through their building late on Tuesday night. Several surrounding towers were evacuated as a precaution. All photos by Antonie Robertson / The National

The fire quickly spread through the building, gutting apartments and sending debris raining down on vehicles below.

Dozens of firefighters and vehicles were at the scene shortly after the fire was first reported about 8.30pm on Tuesday.

Exhausted crews take a brief break and check their equipment.

The fire in Sharjah lit up the night sky.

Buildings in the area are tightly packed together and several were evacuated amid fears the blaze could spread.

Many residents said they did not have home insurance and fear their lost possessions cannot be replaced.

The blaze continued into the night with crews remaining at the scene on Wednesday morning to dampen the building.

Some tenants managed to grab a handful of possessions before fleeing the tower.

Residents watch on as the fire is contained.

The fire in Sharjah was reported after 8.30pm.

Damage to the rear side of the building was not as severe leading some to hope they can recover their belongings.

A police officer collects testimonies from the residents. EPA

There were more than 300 apartments inside the 48-storey building and many are shared by tenants and families.

Fadlallahie Hassoun cradles his cat after escaping the building.

The building burned for several hours before it was brought under control.

Charity workers from Emirates Red Crescent hand out water and juice and take down details to arrange accommodation.

Families fear they will not be allowed to return to collect belongings for days if not weeks.

People stand on a bridge and watch a fire that erupts in a 48-storey residential tower in Sharjah. AFP

Residents of the burning high-rise building look on as fire-fighting efforts continue. EPA

These were the details of the news Sharjah fire: Aluminium cladding blamed as authorities to probe towers across emirate for this day. We hope that we have succeeded by giving you the full details and information. To follow all our news, you can subscribe to the alerts system or to one of our different systems to provide you with all that is new.