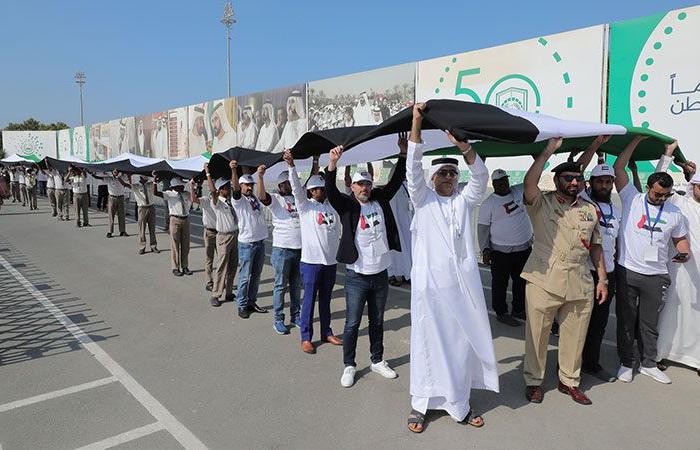 Hello and welcome to the details of VIDEO: Dubai Police unfurl record 2,020 metres long UAE flag and now with the details

A new achievement has been added to the UAE’s portfolio of accomplishments, after the General Command of Dubai Police broke two new Guinness World Records.

The first record was broken for raising the world’s longest flag, spanning 2,020-metres in length.

The second one, in a proudly memorable scene, five thousands people from 58 nationalities raised the flag, breaking the record for being the largest number of people holding one flag.

The UAE flag was raised and carried by a diverse spectrum of people, including Emiratis, residents, visitors, employees and students from various nationalities for 100 meters at Dubai Police Academy.

The event conveys a message of tolerance, coexistence, and accepting the other.

Brigadier Youssef Al Adidi, Director of Al Qusais Police Station confirmed that the initiative comes as directed by Major General Abdullah Khalifa Al Marri in line with the state’s celebration on the 48th National Day, stressing that the length of the flag of 2020 meters was chosen in conjunction with the start of the countdown of the Dubai Expo 2020.

He pointed out that Dubai police managed to break a second record for number of people representing 58 nationalities, stressing that the participation of different nationalities in the event comes in line with the state's celebration of the year of tolerance.

These were the details of the news VIDEO: Dubai Police unfurl record 2,020 metres long UAE flag for this day. We hope that we have succeeded by giving you the full details and information. To follow all our news, you can subscribe to the alerts system or to one of our different systems to provide you with all that is new.