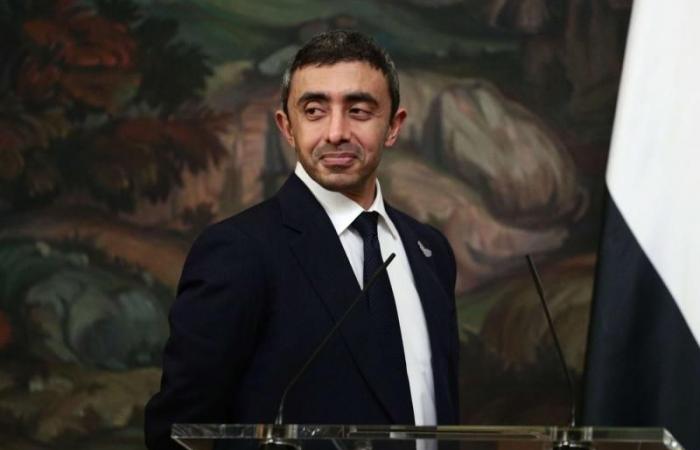 ABU DHABI--On the eve of US President Joe Biden’s State Depatment speech outlining his future policies in the Middle Est and Gulf region, the United Arab Emirates’ chief diplomat reviewed on Thursday issues of common interest between Abu Dhabi and Washington in a telephone conversation with his US counterpart.

UAE Foreign Minister Sheikh Abdullah bin Zayed al-Nahyan discussed on the phone with US Secretary of State Antony Blinken “strategic relations and Middle East regional issues,” according to a statement published on Thursday on the UAE foreign ministry website.

They “discussed joint cooperation to confront regional threats, and work to further maintain security and stability in the region,” the statement said.

Biden said Thursday that he would stop arms sales related to the Yemen offensive, but gave no immediate details of what that might mean. At the same time, he  reaffirmed that the United States was committed to ensuring the kingdom’s defence.

The US president’s decisions reflected his awareness about the threat Iran poses to Gulf and Saudi security, although regional analysts said the new US moves would have been more beneficial had the new administration had enough time to develop a clearer notion of the challenges at hand and held direct talks with the concerned parties starting with Saudi Arabia.

The UAE believes that US credibility in the region is at stake, and that withholding US support from offensive operations in Yemen will only increase wariness that Washington’s policy reviews could go further than regional security requirements would warrant.

The Emirati foreign ministry’s mention of  “strategic relations” between Washington and Abu Dhabi  is seen as a hint from Abu Dhabi at the type of threats Iran constitutes for countries of the region.

This threat is illustrated by Iran’s continuous breaches of the 2015 nuclear deal, its race to arms and the development of ballistic missiles and drones, which often end up in the hands of proxy militias in Yemen, Iraq and Syria. These weapons have been used by the militias to serve Iranian interests and strike at various targets, including Saudi oil installations.

It has become clear that the new US administration will reshape its security arrangements in the Middle East, and make broad changes to its diplomatic organsiation. It is also expected to review the list of the advisory staff in the Defence Department. National Security Council and Foggy Bottom advisers are, on the other hand, mostly constituted by staff from former US President Barack Obama’s administration, which accommodated Iran to the extent of encouraging it to engage in subversive activities. Experts fear that this scenario could unfold again in a manner that threatens Gulf security.

Sources said that the UAE has enough political and diplomatic weight to be able to talk with the new administration without the inhibitions of diplomatic and media-related sensitivities that could stem from dialogue between the Biden administration and its Saudi allies. Even before Biden’s innaguration, the US-Saudi relationship was the target of pressures related to the Jamal Khashoggi case and other cases linked to human rights in the kingdom.

The UAE is seriously looking at the changes that could be introduced by the new US administration. These are likely to include leaving foreign policy issues to the secretary of state and national security advisors, with Biden focusing on restoring political cohesion in the country and confronting the coronavirus pandemic.

This is also likely to open the way for attempts to influence US policy positions from traditional allies or countries such as Iran, Turkey and Qatar, or even from Islamist organisations that want to gear new US policies towards reviving their hopes for a new “Arab spring.”

Observers believe that, just as Washington thinks about protecting its interests by adjusting its relationship with Iran, Gulf states are likely to seek to safeguard their security interests, mainly through greater self-reliance. This explains the Emiratis’ desire to acquire F-35 fighter jets and Saudi Arabia’s endeavours to diversify its weapons purchases from more than one country.

Gulf states want to participate themselves within an international umbrella in defending regional security, especially against Iranian threats, not only rely on the United States.

The Emiratis believe that their access to advanced aircraft will help them achieve a regional balance that helps establish a lasting relationship with Iran based on peace and stability.

UAE Ambassador to Washington Yousef al-Otaiba expressed his country’s confidence in the expected completion of the sale of F-35 aircraft after the Biden administration reviews some pending arms sales to US allies.

“We did everything by the book and they will discover that once the review is complete and it will proceed,” Otaiba told a virtual Washington Institute forum earlier this week, describing the review as “pro forma.”

Last month, a US State Department official said Biden’s administration was temporarily pausing the implementation of some pending arms sales to US allies to review them.

“Everything is still proceeding while undergoing a review at the same time. I am confident it will end up in the right place,” Otaiba said.

“If you are going to have less of a presence and less involvement in the Middle East you can’t at the same time take tools away from your partners who are expected to do more,” he said.

The UAE has inked deals to buy up to 50 F-35 fighters and 18 armed drones and other defence equipment in contracts worth $23 billion.

These were the details of the news The UAE sees US credibility over Gulf security at stake for this day. We hope that we have succeeded by giving you the full details and information. To follow all our news, you can subscribe to the alerts system or to one of our different systems to provide you with all that is new.