US senate fails to stop F-35 sale to UAE 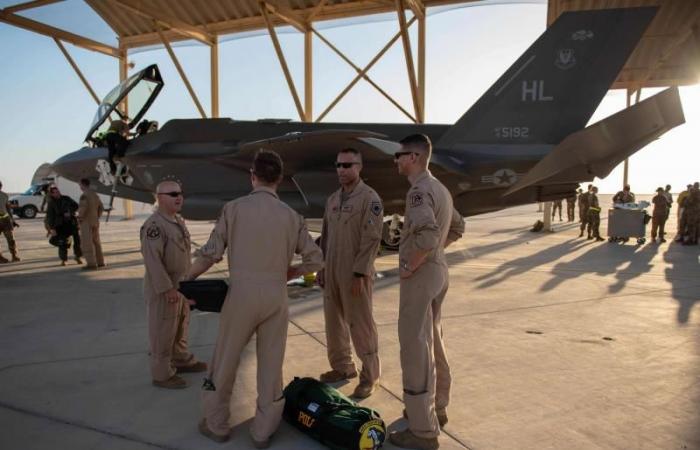 Hind Al Soulia - Riyadh - The sale, worth up to $23.37 billion, includes dozens of F-35s as well as advanced armed drone systems.

An April 2019 file photo shows US soldiers standing next to an F-35A Lightning II stationed at the Emirati Al-Dhafra base, about 32 kilometres south of Abu Dhabi. (AFP)

WASHINGTON--The Senate fell short Wednesday in trying to halt the Trump administration’s proposed $23 billion arms sales to the United Arab Emirates, despite bipartisan objections to the package of F-35 fighter jets and drones.

Some Senators argued the sale of the defense equipment, which Secretary of State Mike Pompeo formally authorised last month after the Abraham Accords normalising relations with Israel, was unfolding too quickly and with too many questions. The administration has billed it as a way to deter Iran, but UAE would become the first Arab nation — and only the second country in the Middle East, after Israel — to possess the stealth warplanes.

Congress has shown a willingness to confront Trump in one main area — on defence policy. But on Wednesday the effort to turn back the arms sales failed to reach the 51-vote majority needed for passage. Trump was expected to veto the two resolutions anyway.

The showdown over the sale, alongside sweeping bipartisan support for the annual defence bill despite Trump’s threats to veto it, is potentially a final power play between the executive and legislative branch in the final weeks of Trump’s presidency. The Senate will take up the broader defence bill soon.

On Wednesday, US senators narrowly rejected one resolution to disapprove of the F-35 sales, 47-49, and the other over the sale of armed drones, 46-50, in procedural votes largely along party lines. That’s far short of the two-thirds majority that would have been needed to overcome a potential presidential veto.

Action is halted for now, though the House, where Democrats have control, would likely be able to pass them easily.

Robert Menendez, the top Democrat on the Senate Foreign Relations Committee, agreed that Iran posed risks but said: “We have yet to understand exactly what military threat the F-35s or armed drones will be addressing vis-a-vis Iran.”

But, he said, “without resolving those issues, is this the moment to be selling for the first time ever F-35s, armed drones into the heart of the Middle East?”

The arms sale emerged after the US brokered the Abraham Accords to normalise relations between the UAE, Bahrain and Israel.

In notifying Congress last month, Pompeo said the authorisation of the sale was in recognition of the “deepening relationship” with the UAE and its need to deter threats from Iran.

Pompeo said the “historic agreement” reached with the Abraham Accords offered a “once-in-a-generation opportunity” to transform the region’s “strategic landscape.”

The sale, worth up to $23.37 billion, includes dozens of F-35s, advanced armed drone systems and a package of air-to-air and air-to-ground munitions.

Senator Bob Menendez of New Jersey, the top Democrat on the Foreign Relations Committee, said a list of questions senators sent to Pompeo and then-Defense Secretary Mark Esper about the arrangement remains unanswered.

Republican Senator Roy Blunt said that selling weapons to the UAE supported US jobs and provided “reinforcement of our friends who see common enemies and are working directly to move their country and their region in a much better direction.”

The White House in a statement said that the weapons would enable the UAE to “deter increasing Iranian aggressive behavior and threats issued in the wake of that peace deal.”

One of the costliest warplanes in the world, the F-35, manufactured by Lockheed Martin, carries high-end sensors and data-collection tools and can be used for airstrikes, intelligence gathering and air-to-air combat.

A classified briefing for senators did not appear to adequately answer their questions.

“We must assert our congressional prerogative,” Menendez said. Voting “sends a message to the executive branch.”

These were the details of the news US senate fails to stop F-35 sale to UAE for this day. We hope that we have succeeded by giving you the full details and information. To follow all our news, you can subscribe to the alerts system or to one of our different systems to provide you with all that is new.

NEXT UAE moon-sighting committee to meet virtually on Monday