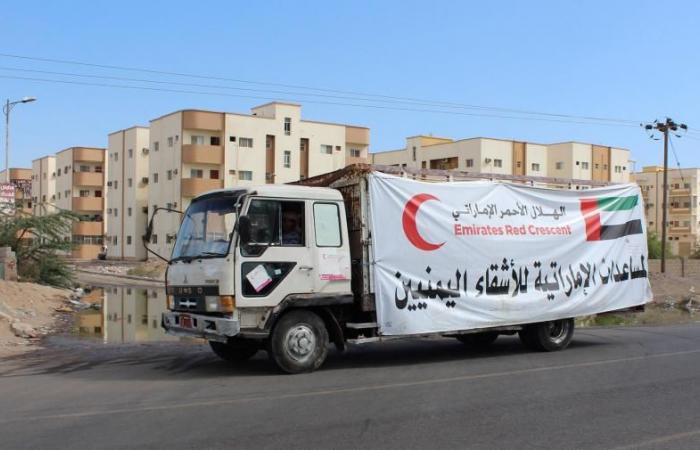 A truck carrying medical aid provided by the UAE Red Crescent in the southern port city of Aden. (AFP)

DUBAI – The Emirates Red Crescent (ERC) said Wednesday one of its mobile health clinics was attacked by gunmen in war-torn Yemen, in a strike it condemned as a “cowardly terrorist act.”

It did not mention any casualties in the assault in Yemen’s third largest city of Taiz, which is under government control but surrounded by forces of the Iran-backed Houthi rebels.

The United Arab Emirates is a member of the military coalition led by its ally Saudi Arabia, which intervened in the conflict five years ago to support Yemen’s internationally recognised government of President Abd Rabbo Mansour Hadi.

“The Emirates Red Crescent condemns and deeply regrets the cowardly terrorist act that targeted its medical staff working in mobile clinics,” the organisation said in a statement.

The “shooting attack” on its medical staff “represents a major violation of international norms, treaties and covenants,” it said.

The UAE foreign ministry did not accuse any group of the attack, but criticised the breaching of conventions that provide special protection for aid and rescue workers.

“The ministry stressed that such hostile acts impede relief operations and hinder humanitarian access in Yemen, which may aggravate the plight of the people and worsen their conditions,” the state news agency WAM said.

The ministry also underscored “the UAE’s utter condemnation of such criminal acts and full rejection of all forms of violence and terrorism aimed at undermining security and stability in contravention of religious and human values and principles.”

The mobile medical clinics dispatched by the ERC have been providing services to residents of remote Yemeni villages, under the framework of the UAE’s humanitarian efforts to ease the suffering of those living in remote areas of Yemen without access to hospitals or health centres.

The ERC’s mobile clinic project aims to identify and diagnose medical cases, detect cases of malnutrition and various diseases and treat them free of charge.

Yemen’s long war has plunged the country — the poorest on the Arabian Peninsula — into what the United Nations describes as the world’s worst humanitarian crisis.

As a result of the conflict, nearly 80% of the population is dependent on some form of humanitarian aid, with the situation deteriorating sharply this year amid the coronavirus pandemic and an economic crisis which has seen donor funding dry up.

These were the details of the news Houthi gunmen attack Emirati health clinic in Taiz for this day. We hope that we have succeeded by giving you the full details and information. To follow all our news, you can subscribe to the alerts system or to one of our different systems to provide you with all that is new.

PREV Fenix launches in the UAE after $3.8 million seed round
NEXT Foodtech challenge awards $1 million grant to four startups