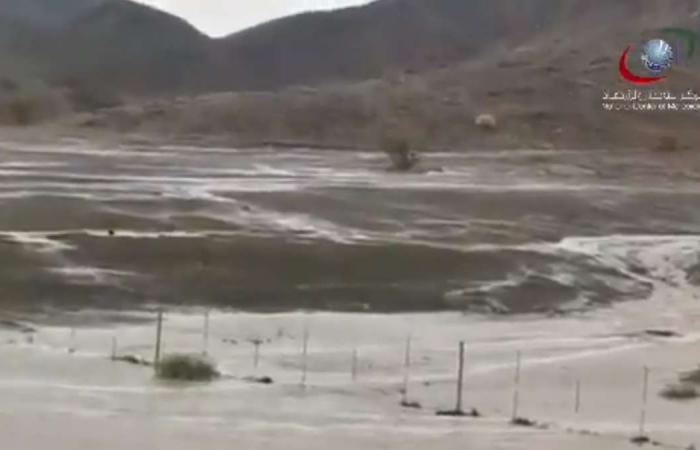 Thank you for your reading and interest in the news Weather: heavy rain hits parts of UAE and causes flooding on roads and now with details

The National Centre of Meteorology shared videos on Twitter of rain falling along the new Khor Fakkan road in Sharjah.

Wadis quickly filled with water in several parts of the country and Kalba in Sharjah appeared to be one of the hardest hit by the unstable weather.

Videos of motorists were posted online as they tried to make their way through flooded roads.

Water was also seen cascading down from mountainous areas onto roads and open areas in the different Emirates.

Winds reached up to 45kmph in exposed areas, causing blowing dust and sand which led to reduced visibility on the roads.

The weather bureau issued an alert asking people to stay away from flooded areas and be careful when driving.

“Precautions should be taken in case of heavy rain over some eastern areas and residents are advised to stay away from areas [prone to] flash floods and accumulated rain,” it said on Twitter.

The downpours are expected to continue throughout the rest of the weekend and should ease up by late Saturday evening.

The convective clouds that formed throughout Saturday and caused heavy rainfall should clear by Sunday due to light winds passing through the Emirates.

Flash flooding is common in northern parts of the Emirates and police always advise residents avoid driving near wadis during treacherous weather.

When it rains across the UAE, rescue teams are quick to attend to those stuck in dire situations.

Members of search and rescue teams - which are often made up of police officers, Air Wing units and members of the Armed Forces - spend hours, and sometimes days, intensively looking for those washed away by floods.

These were the details of the news Weather: heavy rain hits parts of UAE and causes flooding on roads for this day. We hope that we have succeeded by giving you the full details and information. To follow all our news, you can subscribe to the alerts system or to one of our different systems to provide you with all that is new.