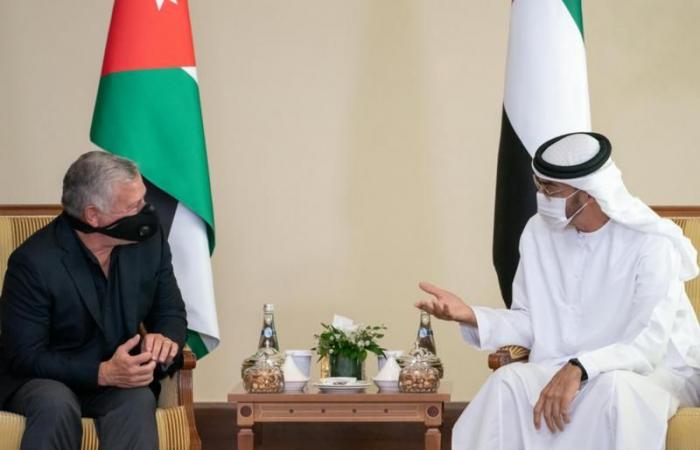 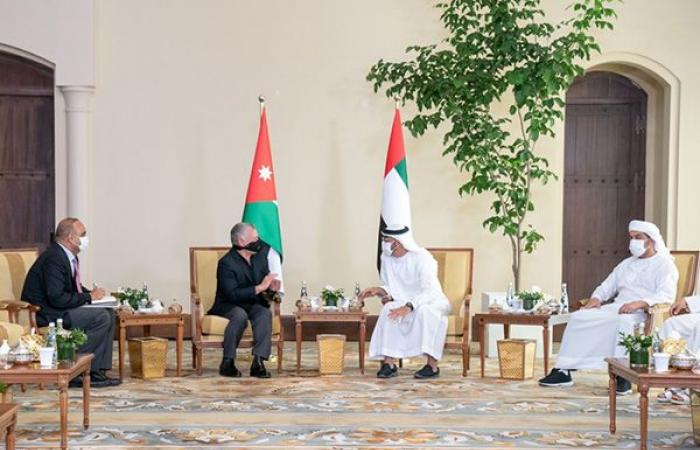 We show you our most important and recent visitors news details Palestinian issue, annexation discussed by king of Jordan, Abu Dhabi crown prince in the following article

ABU DHABI – Jordanian King Abdullah II discussed Wednesday with the Abu Dhabi Crown Prince Sheikh Mohammed bin Zayed al-Nahyan bilateral ties and means to advance them across all sectors to serve mutual interests, according to a statement issued by the Royal Jordanian Court.

On a visit to Abu Dhabi, King Abdullah reviewed with Sheikh Mohamed Jordan-UAE cooperation and coordination on a number of political, economic and development-related issues, the Royal Court said.

The talks covered a number of regional and international issues of mutual concern, notably the Palestinian cause and the dangerous ramifications of Israel’s announced moves to annex lands in the West Bank.

The two leaders expressed their rejection of any unilateral measures, stressing that they violate international law and undermine the prospect of achieving peace in the region.

King Abdullah reaffirmed that the two-state solution is the only way to end the Palestinian-Israeli conflict and achieve just and comprehensive peace, leading to the establishment of an independent, sovereign and viable Palestinian state on the June 4, 1967 lines with East Jerusalem as its capital.

Jordan’s king also hailed the UAE’s active international diplomacy in support of the Arab position in rejection of annexation.

During the talks, Sheikh Mohammed pointed to “Jordan’s steadfast position” in support of the Palestinian cause and its efforts to safeguard holy sites in Jerusalem, in line with the Hashemite custodianship.

The talks covered efforts to reach political solutions to crises in the region so as to achieve peace, security and stability.

The two leaders also discussed efforts by the two countries to counter the coronavirus pandemic and means to enhance cooperation among their health institutions.

The latest developments related to the pandemic regionally and globally, and international efforts to contain the disease’s economic and humanitarian implications were also discussed.

The talks were an opportunity for Sheikh Mohammed to underscore the importance of “maintaining and bolstering Arab solidarity and cooperation under the current conditions, including the challenges and meddling attempts the region is facing.”

The Abu Dhabi crown prince noted that Arab unity and enhancing Arab security is a shared interest to counter the threats of meddling in Arab countries’ internal affairs, which jeopardise their security and sovereignty.

The two leaders reaffirmed keenness to continue bolstering bilateral ties to take them to new heights of cooperation and joint action to serve the interests of the two countries and peoples, highlighting the shared views between Jordan and the UAE on regional and international issues.

They also expressed their desire to continue coordination and consultation between the two countries on various regional issues and crises, noting the importance of activating joint Arab action, especially during the current phase to unify positions on threats to regional security, stability and resources.

After the meeting with the Abu Dhabi crown prince, King Abullah took to Twitter to reaffirm the “warm” ties between Jordan and the UAE.

“My meeting with Sheikh Mohamed Bin Zayed Al Nahyan, the crown prince of Abu Dhabi and the deputy supreme commander of the UAE Armed Forces, was warm and fruitful as usual. It is based on brotherly relations and solid strategic ties that we are always keen to bolster,” the king said in a tweet in Arabic on his official account.

King Abdullah’s visit to the UAE is his first abroad since the beginning of the coronavirus pandemic.

These were the details of the news Palestinian issue, annexation discussed by king of Jordan, Abu Dhabi crown prince for this day. We hope that we have succeeded by giving you the full details and information. To follow all our news, you can subscribe to the alerts system or to one of our different systems to provide you with all that is new.