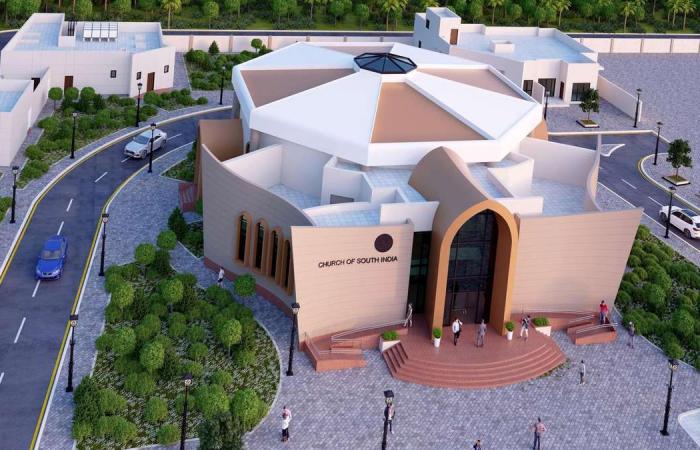 Hind Al Soulia - Riyadh - A new church to be built in Abu Dhabi will provide a spiritual home for generations of Indian worshippers.

Construction will soon begin on the Church of South India, serving members of the Protestant branch of Christianity, with a foundation stone ceremony to be held this weekend.

The church will be located in the Abu Mureikha area of the capital, near the plot of a Hindu temple that is being built.

With tall, narrow windows and an arched doorway, the architecture of the place of worship will blend Islamic design elements.

More than four acres of land for the church was granted by Sheikh Mohamed bin Zayed, Crown Prince of Abu Dhabi and Deputy Supreme Commander of the Armed Forces.

“This is a blessing to our community and is a mark of tolerance of this nation,” said Reverend Sojee Vergis John.

“It is yet another milestone of the religious freedom in this country. We will now have the ability to properly serve our community.”

More than 750 parishioners in Abu Dhabi, mainly from Kerala state in southern India, will finally have their own place of worship after 40 years.

They congregate weekly at the St Andrew’s Church for two-hour prayer services on Friday and on Sunday for Bible studies.

The estimated Dh9 million cost will be sourced from donations from followers and well-wishers in the UAE. The plot in Abu Dhabi will be the second shrine for the Church of South India, with one already in Fujairah.

From a small community of 50 people in 1979, the church has grown to about 6,000 members across the country.

Its followers in Dubai, Sharjah, Abu Dhabi, Al Ain and Ras Al Khaimah pray in Anglican churches in the Emirates.

Due to the large number of parishioners and numerous congregations, worshippers usually hold gatherings in community halls and shrines of the larger churches.

There is a spirit of brotherhood, fellowship and acceptance in the UAE

Plans for the church show earthy tones of beige and white on the exterior with an octagon-shaped roof and a skylight that allows the sun’s rays to filter across the large prayer hall within.

Approvals for construction are being sought and the work is expected to take about a year with plans to open for worship in early 2021.

It will also include halls for other congregations to gather much like the space it has shared over the past four decades in St Andrew’s Church, the country’s oldest Anglican shrine.

“There is a spirit of brotherhood, fellowship and acceptance in the UAE,” said Reverend John.

“This makes it an example of harmony and peace and a moral for the world’s religions.”

The church was among 18 non-Muslim places of worship that received official status and licences as part of a Department of Community Development initiative in September.

Many churches have been in existence in the Emirates for decades, with some given land by Sheikh Zayed, the nation’s Founding Father.

The Church of South India was among five new places of worship officially registered in September.

A ceremony to bless the foundation stone will be held on Friday evening at St Andrew’s Church in the presence of hundreds of parishioners and Sheikh Nahyan bin Mubarak, the UAE’s Minister of Tolerance, and senior government officials.

The foundation stone laying ceremony will be conducted on Saturday morning on the new plot of land off the main Abu Dhabi-Dubai highway.

The Church of South India is the second largest Christian church in India after the Catholic Church and has more than four million followers worldwide.

These were the details of the news New church in Abu Dhabi is 40-year dream come true for devoted flock for this day. We hope that we have succeeded by giving you the full details and information. To follow all our news, you can subscribe to the alerts system or to one of our different systems to provide you with all that is new.