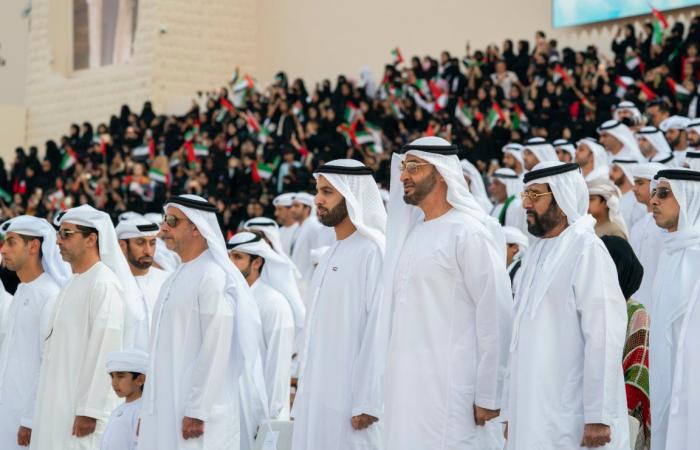 You are now following the details of the Mohamed bin Zayed, Sheikhs attend 'March of the Union' news and now we leave you with the details

Mohamed Nass - Dubai - His Highness Sheikh Mohamed bin Zayed Al Nahyan, Crown Prince of Abu Dhabi and Deputy Supreme Commander of the UAE Armed Forces and Sheikhs, attended Tuesday the 'March of the Union' as part of the Sheikh Zayed Heritage Festival 2019 in Al Wathba, Abu Dhabi, on the occasion of the 48th National Day.

The march, organised by the Ministry of Presidential Affairs, drew huge crowds of Emiratis representing various emirates and regions of the UAE, who all expressed their joy at the 48th National Day and pride of their wise leadership under President His Highness Sheikh Khalifa bin Zayed Al Nahyan, and Supreme Council Members, Their Highnesses the Rulers of the Emirates.

His Highness Sheikh Mohamed bin Zayed Al Nahyan said the country's history is a source of 'pride for our people.

"Today I witnessed the March of the Union, in which the people of the UAE took part on the occasion of the country’s 48th National Day. The strength and cohesion of the UAE people, and their connection to their heritage and the values of their nation's founders is our source of our happiness and pride."

The march featured a number of traditional performances, including Emirati dances, music, and horse and camel riding, with the audience cheering and applauding for the spectacular show.

A poem was also recited as part of the celebrations, where virtues of patriotism and loyalty to the UAE were recited.

These were the details of the news Mohamed bin Zayed, Sheikhs attend 'March of the Union' for this day. We hope that we have succeeded by giving you the full details and information. To follow all our news, you can subscribe to the alerts system or to one of our different systems to provide you with all that is new.