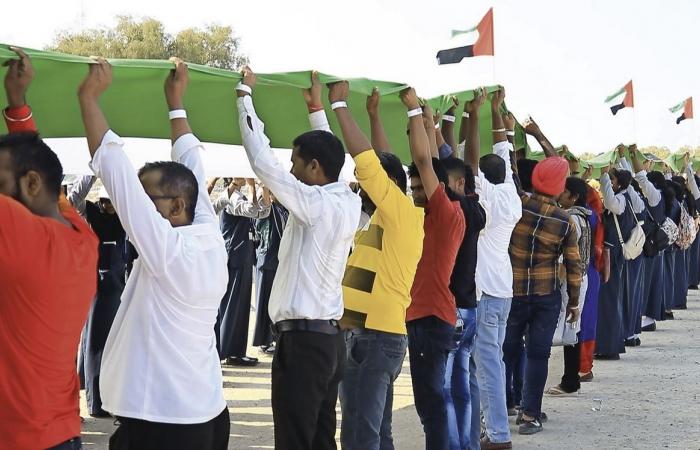 Thank you for reading the news about Over 5,000 residents wave world's longest flag in Dubai and now with the details

Aden - Yasmine El Tohamy - The 2,020-metre flag held and marched by the participants also became the longest banner flag to be lifted.

The 'most people carrying a banner' and the 'most nationalities carrying a banner' has now been bagged by the UAE after bringing together schools, corporates and individuals. To break the first world record, the requirement was 3,795 people, and for the second world record, the event managed to bring together people of over 70 nationalities to lift the banner. The 2,020-metre flag held and marched by the participants also became the longest banner flag to be lifted. The record was held by Kuwait that saw 3,795 people march with a 2,019-metre Kuwaiti flag on the road.

Speaking to Al Khaleej Today, Brigadier Yousuf Aladeedi, director of Al Qusais Police Station and chief of the event at the academy, said: "We are grateful to the people for making this record attempt a success. It was an emotional and beautiful moment to see people of over 70 nationalities lift the UAE's flag above their heads and march to show love and support for the country they live in. The turnout surprised us: We expected 5,000 people but more than 10,000 people turned up and we tried to include as many as possible. The record for the most number of nationalities lifting the banner required us to have 31 nationalities but we managed over 70 nationalities, over double of what was needed."

Participants included around 2,000 students from over 22 schools, Al Futtaim employees and their families, members from prominent associations, personnel from various organisations, the Dubai Police staff and academy students and social media groups.

Dr Haidar Al Yousuf, managing director of Al Futtaim Health, said: "We are proud and happy to be part of this memorable and historic event. Seeing people from different backgrounds, nationalities, cultures come together to raise the UAE national flag was a true representation of diversity and tolerance, which are the core values of the UAE. We share these values as a healthcare group and serve everyone who comes to us regardless of their background, nationality or culture."

HealthHub Al Futtaim had commissioned for the production of the largest UAE national flag in the world. The mammoth UAE national flag was put together in 208 hours and it took 25 days to stitch up as a single banner. The flag weighed approximately 1,200kg, was 2,020 metres long (to align it with the Expo 2020) and three metres wide.

Indian expats Sheetal M and Beena S, had come along with a group of 70 women to participate in the world record. "We have been in the UAE for 15 years but never really got a chance to show our gratitude and took this event as an opportunity. It was absolutely amazing to meet up with our whole group and also meet so many nationalities. This was a once-in-lifetime event and we are glad we made it to the record books," Sheetal said.

These were the details of the news Dubai - Over 5,000 residents wave world's longest flag in Dubai for this day. We hope that we have succeeded by giving you the full details and information. To follow all our news, you can subscribe to the alerts system or to one of our different systems to provide you with all that is new.